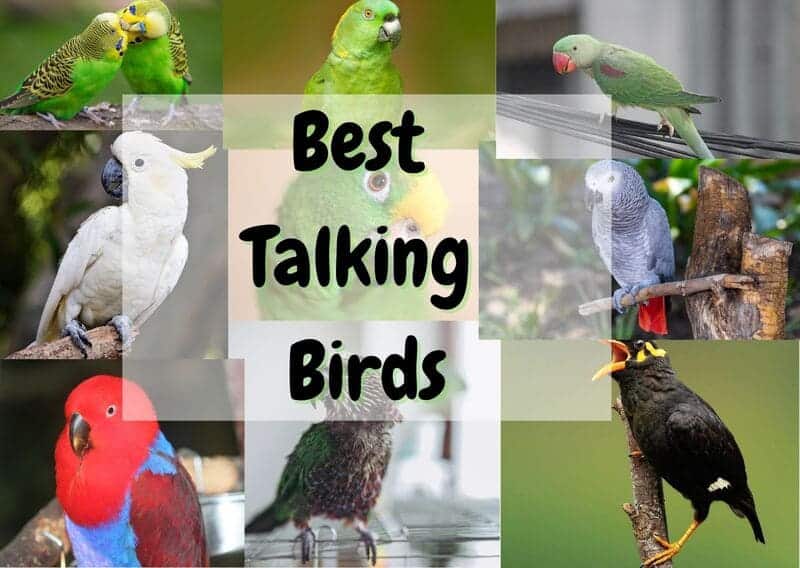 Having a talking bird can be a lot of fun, whether you are trying to teach them tricks or just wanting to impress your friends. However, not all parrots are equally as likely to talk, so if the ability to talk is an important consideration for you, you need to be careful about which breed/species you bring home.

In this article, we are going to take a look at the twelve of the best birds that can talk if you are interested in getting a little chatterbox as a pet.

12 Best Birds That Can Talk – A Complete Guide

African grey parrots are often considered the best parrot if you are looking for one that talks. These birds are extremely intelligent and are more advanced than some other breeds when it comes to their ability to mimic sounds. In fact, evidence shows that African grey parrots can sometimes memorize up to 1000 different words and, with plenty of training, understand what some of them mean to actually communicate with you.

Budgerigars have the capability to be excellent talkers; however, they need to be exposed to human voices at a very young age in order to do so. One of the benefits of budgies is that they are small and easier to take care of than some of the other birds on the list. They also need less space than many of the bigger bird species on this list which makes them great if you have an apartment or smaller house.

If you are looking for an Amazonian parrot, the Yellow-naped parrot is a great option. They are definitely the best Amazonian parrot when it comes to talking, and they are extremely intelligent, like the African grey parrot.

Studies have found that with plenty of proper training, yellow-naped parrots have the ability to learn upwards of 300 different words. They are also generally happy and agreeable birds which makes them a better option for families or newer bird owners than some other more aggressive options.

There are several different kinds of Ringneck parrots/parakeets, all of which generally have the capability to talk. However, the Indian Ringneck parakeet definitely stands apart from the rest. They can learn upwards of 200 different words and can even start to pick up on different song lyrics. Keep in mind that with these, their ability to talk relies a lot on consistent interaction with humans. They do not typically just pick up human sounds on their own.

Eclectus parrots are considered one of the best parrots available when it comes to mimicking human noises. Eclectus parrots, especially males, tend to be able to produce very clear-sounding words. Females will also talk, but typically not as much as males do. If you get an Eclectus, you need to keep its diet in mind as they will typically only eat fruits and vegetables as seeds will often make them sick.

Hill Myna are unique because they not only mimic words but will actually mimic the tone of your voice. In addition to the words they use, they also tend to make a lot of noise via whistles, screeches, wails, and other sounds. Both kinds of hill mynas (Indian and common) tend to have better talking capabilities than other kinds of mynas, which may be able to talk but generally are not all that clear.

Monk parakeets are often commonly called quaker parakeets. Just like most of the other birds on this list, they do require training in order to successfully mimic human speech, but with time they can both learn and imitate a wide range of different words taught to them by a trainer. As long as they are socialized correctly, they are often able to use different words correctly. You or a trainer will have to work to carefully associate certain words with certain actions to achieve this. They will also usually mimic other sounds that they hear, like other pets, songs, or a television show.

Macaws can be a lot of fun, but they are not for everyone. They are extremely intelligent, energetic, and sociable, but they also tend to be loud and even destructive at times if not trained and cared for correctly. If you have the time and patience to train your macaw, it will end up being a great pet for you or your whole family. On the other hand, if you are a first-time bird owner or looking for something easy, you might want to skip out on bringing home a Macaw for now.

Cockatoos are extremely social birds, and they have great talking abilities. They can imitate a wide range of different sounds in addition to human voices, so what your Cockatoo learns to do really depends on how much/well you train. As far as training goes, Cockatoos generally can learn to mimic words really quickly, but it may take significantly longer to teach your bird what some of the different words mean.

If you are looking for a cuddly and affectionate bird, the hawk-headed parrot is definitely a great option. However, their potential to talk is not nearly as high as many of the other birds on this list. If you do get your hawk-headed parrot to talk, it will likely be in a soft tone or even a whisper. However, as far as personalities go, hawk-headed parrots are one of the best.

Yellow-crowned Amazon parrots are another playful and affectionate species, and they are also great talkers. If you want to ensure that your yellow-crowned amazon is able to talk, you want to make sure that you interact with it a lot and have it in a healthy, safe environment where it can thrive. Keep in mind that once they start talking, they are quite loud.

What Does It Mean For A Parrot to ‘Talk’?

It is pretty commonly known that a lot of parrots can mimic the sounds that humans make, but it is not always clear whether they are just copying sounds or actually trying to communicate.

First, not every single parrot will be able to say actual words. It comes more naturally to some parrots, while others will require a lot of training starting at a young age in order to mimic human words. This is even true for parrot breeds that are especially well known to be talkers like the African Grey Parrot and other birds on the list below.

Second, the majority of parrots do not actually know what they are saying. Rather they are simply mimicking the sounds that they hear. There is a chance that they could learn what a couple of words mean, but more often than not, the words do not actually mean anything to the parrot. However, with professional training, more intelligent parrot species are able to learn what a wide range of different words are and actually communicate with humans.

How Can Some Birds Talk?

The main reason that parrots are able to talk is because of their brain structures. Parrots have unique brain structures that allow them to be vocal learners, unlike other animals that communicate and learn with things like body language.

Even in the wild, parrots are known to mimic sounds such as the voices of their mates or nestlings. Because of this natural habit wild parrots have, it makes sense that when in captivity, they would start to mimic the sounds of the people around them because that is who they are in contact with most.

However, what many people find surprising is that parrots do not actually have vocal cords. Rather, they change the sounds they make by modifying the airflow over something called the syrinx, which is connected to the lungs.