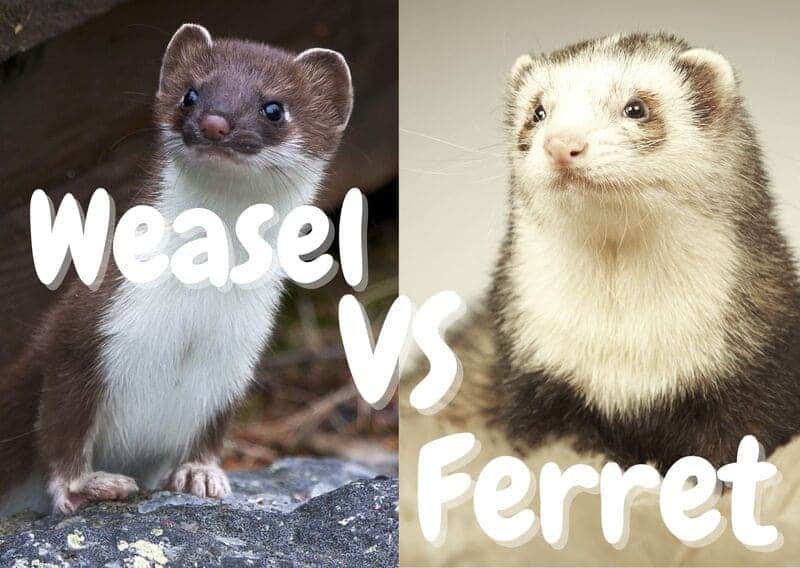 Weasels and ferrets are in the same family, so when you first look at them, it may be hard to tell the difference. However, they are two very different species, and with a little bit of time, you will be able to quickly spot the difference between the two species.

The obvious difference between ferrets and weasels is that they are two different sizes, and they tend to have different coat colors. Additionally, they also have very different temperaments. Weasels are more aggressive, which is why ferrets tend to make better-domesticated pets.

In the rest of this article, we are going to go over all of the major differences between ferrets and weasels. We are going to talk about where you can find them in the wild, their appearances, their temperaments, their care, their lifespans, and more. You can use this information to make an educated decision about what kind of pet you want to bring home or simply to better understand the difference between these two great species.

8 Big Differences Between Weasels And Ferrets

Of course, the first difference most people notice about the ferret and the weasel is how they look. While they are very similar in appearance, there are several key differences that will help you tell them apart right away.

First of all, out of the two, ferrets tend to be both larger and longer than weasels. Weasels vary a lot in size and can be anywhere from 4 to 12 inches in length and 1 to 13 ounces in weight. Ferrets are much more standardized and tend to be 13-15 inches in length and 4.5-5 pounds. Even the largest of weasels can only grow up to 16 inches, while ferrets can get up to 24 inches.

Ferrets and weasels also have slightly different body types, though you may not notice it unless you have two of them sitting next to each other. Both animals have tubular bodies, but ferrets have very thin bodies and longer legs than weasels do.

Finally, they have different coats. Ferrets typically have dark brown or even black coats with the occasional cream markings. On the other hand, weasels typically have coats that are a much lighter brown or beige. Weasels also usually have white underbellies.

Weasels are very energetic creatures, so whether they are living in the wild or in captivity, they tend to spend most of their waking hours very actively and not lounging around. In the wild, they spend a lot of time hunting, but they also spend time dancing, running around, looking for eggs, climbing trees, and building burrows that they will sleep in when they tire. Nevertheless, the majority of their time is spent hunting, even if they are not hungry, as they will store what they catch underground near where they sleep for later on.

Weasels are not particularly cuddly animals, so if that is what you are looking for in a pet, you will likely want to get a ferret or some other animal instead. In fact, their personalities are known to be so aggressive at times that many experts believe they are best left in the wild. Many places around the United States have even made it illegal to own weasels as pets because they are considered dangerous.

Ferrets, on the other hand, are much more sociable creatures with both other animals and humans when in captivity, which makes them much better pets for individuals and families than weasels are. They can even get along with other smaller pets, but they should be supervised as they are natural predators. While they do enjoy playing with humans, when they need to be left to their own devices, they will be just fine due to their natural curiosity.

Ferrets are also natural carnivores like weasels, but they will also eat pretty much anything they come across, which could be problematic if you let them just roam your house when no one is home.

Ferrets are also extremely intelligent creatures. With time, you should be able to teach them tricks such as coming or sitting on your shoulders.

In the wild, weasels typically live for 2 – 3 years. On the other hand, in captivity, they can live up to 10 years.

4. Trainability and suitability as pets

While they can be a lot of fun, the reality is weasels are better suited for the wild than at home. In the wild, they can adapt to tons of different environments ranging from grasslands to forests to deserts, which is why you can find them in so many places around the world.

If you are going to bring a weasel into your home, you need to know what you are doing as they can be quite temperamental or even dangerous. Furthermore, you are not going to want your weasel around small children or other pets. In fact, most people recommend that if you are going to have a weasel, you do not get any other pet species.

As far as trainability goes, weasels are wild animals, so training them to do tricks, use a litter box, or behave in certain ways can prove very difficult. The fact that they are so difficult to train is why many experts do not consider them to be suitable pets and also why they are illegal in so many places.

Ferrets are very suitable pets for everyone ranging from the single bachelor to large households with children. Keep in mind that if you are going to have a ferret around kids, you need to teach the kids just as much as you need to train the ferret. Ferrets will easily become frustrated, stressed, or scared if a child is constantly pulling their tail, poking at them, or chasing them around the house.

As far as other animals go, many ferrets enjoy spending time with other species of animals as well, such as calm cats or dogs. You should make sure your cat or dog will be just as friendly to your ferret, though.

Your ferret will also likely enjoy it when visitors come. While it may take your ferret a second to warm up to a new crowd, they are very inquisitive and playful creatures. Ferrets will probably like your friends as much as your friends will like them.

Now, just because your ferret enjoys socializing does not mean that he will not be okay with or even want some time alone in his cage. So if you go to work or cannot be home all the time, you do not be concerned. Just make sure your ferret gets at least four hours out of the cage a day.

Ferrets are also very trainable. As long as you are patient and consistent, ferrets are very intelligent and can be taught to use a litter box, do tricks, etc. When training ferrets, you will have much more success using a reward system rather than a punishment system no matter what you are training the ferret to do.

As far as enclosures go, ferrets and weasels have fairly similar requirements. For a single ferret or weasel, you will need a cage that is approximately six cubic feet. It should be at least 18 inches tall and 24 inches wide. You also want to make sure that you get a cage that is made out of metal and not plastic. Both ferrets and weasels have sharp teeth, and you do not want them to be able to chew their way out of the cage while you are away.

In the cage, you are going to want to provide your pet with both food and water, a litterbox (if you are litter-training them), toys, and hammocks to lounge around on. Keep in mind that in addition to the cage, your pet is going to need at least four hours out of the cage to explore, play, and socialize.

In the wild, weasels feed on other small mammals such as mice. Farmers have even found weasels to be nuisances in the past as they sometimes have been known to sneak onto farms to eat poultry, rabbits, or other small farm animals. While 60 – 80% of a weasel’s diet is made of mice and moles, they may also eat rats, frogs, and birds.

If you end up with a pet weasel, you will need to feed him a diet that is high in proteins as they are carnivores. For your weasel, you should avoid foods that are mostly fruits, vegetables, and carbs, but rather ask your vet for a special type of food that is high in meat and protein.

Ferrets are predators, just like weasels. Their diet is primarily made up of rodents and other small mammals. In the wild, ferrets will eat their prey whole, including all of the meat, bones, tissues, and anything that the prey previously digested.

When you own a ferret as a pet, it is understandable that you will not want it to catch and eat live animals in your house all the time. However, you will need to make sure you provide your ferret with food that is high in protein and fat and low in carbohydrates and fiber. A vet will be able to help you pick out a good food option.

Weasels are not nearly as common to have as pets as ferrets are, so there is less known about what potential health problems you will come across while owning one in captivity. However, there is evidence that weasels live longer in captivity than they do in the wild. This is likely due to fewer threats and challenges.

Furthermore, weasels are not prone to the same health conditions as other pets because they are typically fed a more natural diet comprised of meats. Nevertheless, you should still regularly take your weasel to the vet for checkups and get him vaccinated against things such as rabies and distemper.

Due to the fact that ferrets are fairly common domesticated pets, we do know more about them than we know about weasels. As long as you take your ferret to the vet regularly for check-ups and vaccinations, your ferret should live a healthy life. They are prone to some digestive problems, and they also tend to have some respiratory problems.

Weasels are very adaptable creatures, which is why you can find different weasel breeds all over the world. For instance, the Japanese weasel can be found all across Japan in suburbs, forests, villages, and grasslands. Another kind of weasel, the long-tailed weasel, can be found in different areas around North America, and tropical weasels can be found in South America. There are even weasels found in central Asia, East Asia, and Africa.

Most weasels vary by location, but there is one that can be found in various places all across the globe. The short-tailed weasel, which is the most common type of weasel, is found in many places, including North America, Europe, Asia, and even the Arctic. In fact, the only places you likely won’t find weasels are the Middle East, Australia, Antarctica, and some islands.

In America, the wild breed of ferret, the black-footed ferret, is extremely endangered and was even thought to be extinct at one point. However, there are still some breeds of ferrets that live throughout Europe and Asia, where they are referred to as polecats. Nevertheless, in the wild, polecats/ferrets are much less prevalent and more endangered than weasels are. There are likely many more domesticated ferrets in the world than wild ferrets.