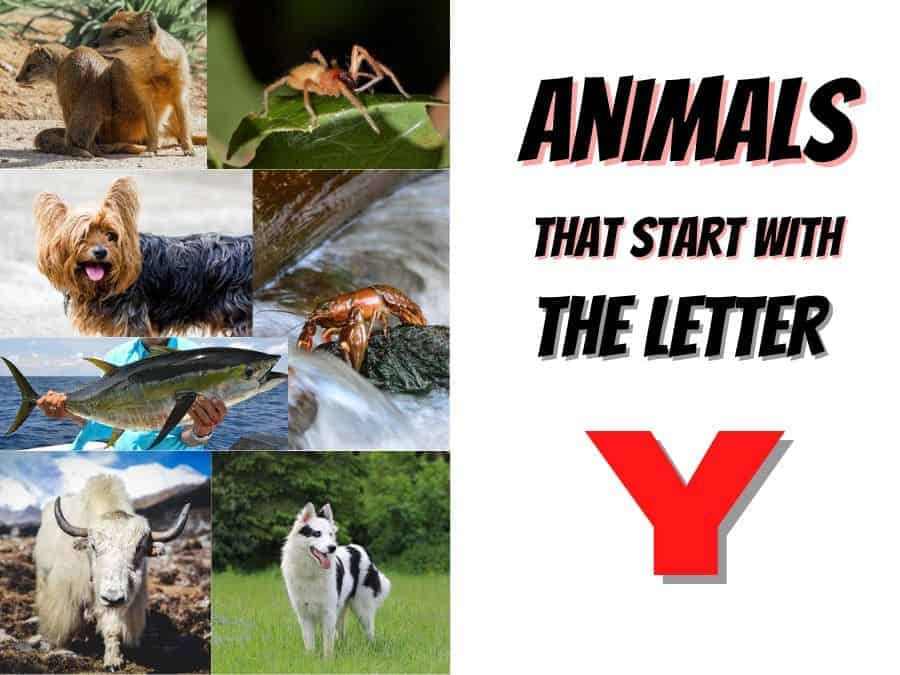 What animals start with the letter Y? We’ve gathered them in this post for you to have them all on one page – from the impressive Yak to the agile Yellow Mangoose, all the way through to the Yeti crab and the Yucatan Squirrel.

So without further ado, let’s find out what animals start with a Y.

Animals Starting With The Letter Y -The Complete List

Yabby is a type of freshwater lobster that is found in Australia. It is a small lobster with a dark brown or green shell.

The yak is a large mammal that is found in the Himalayan mountains of Asia. The yak has thick fur that keeps it warm in its cold habitat.

The Yakutian Laika is a type of dog that is found in Siberia. It is a hunting dog that is used to track down game in the snow.

The yarara is a type of snake that is found in South America. It is a venomous snake that can grow up to 6 feet long.

The yellow anaconda is a type of snake known for its bright yellow color. It is found in the rainforests of South America.

The yellow cobra is a type of snake that is found in Africa. It is a venomous snake that can grow up to 7 feet long.

This type of squirrel is found in the steppes of Central Asia. With its light brown fur and black stripes, the yellow ground squirrel is easily recognizable.

This type of duiker is found in the forests of Africa. As its name suggests, it has a yellow stripe running down its back.

The yellow-bellied marmot is a type of rodent that is found in North America. It hibernates for up to eight months of the year.

The yellow-bellied sea snake is a type of snake that is found in the oceans of Asia and Australia. It is a venomous snake that preys on fish.

Popular in folklore, the yellow-bellied weasel is a type of weasel that is found in North America. It has a long body and short legs.

The yellow-eyed penguin is a type of penguin that is found in New Zealand. It is a rare penguin with yellow eyes and a black head.

With its stony grey fur and light yellow feet, the Yellow-footed Rock-wallaby is one of Australia’s most distinctive and beautiful marsupials. This little macropod is found in rocky outcrops and cliffs in south-western Queensland, New South Wales, the Northern Territory and South Australia.

The Yellow-necked Field Mouse is a species of rodent in the family Muridae. It is found in Austria, Bulgaria, the Czech Republic, Germany, Hungary, Italy, Poland, Romania, Slovakia, Switzerland, and Ukraine. Its natural habitats are temperate forests and temperate grassland.

Known as the Florida Cotton Rat, or simply the Cotton Rat, the Yellow-nosed species is a medium to large rodent found throughout much of the southeastern United States as well as parts of Mexico. These nocturnal animals get their name from their soft fur which is useful in making clothing and insulation.

The Yellow-pine Chipmunk is a species of rodent in the family Sciuridae. It is found in the western United States and Canada. Its natural habitats are temperate forests and temperate grassland.

One of the larger tuna species, yellowfin are easily recognized by their bright yellow fins and silver sides. These fish are built for speed, with a streamlined body and long pectoral fins that help them cut through the water. They are found in tropical and subtropical waters around the world.

The Yeti Crab is a species of crab that was discovered in 2005 in the South Pacific Ocean. It is notable for the thick covering of hair-like setae that covers its body. These setae are used to cultivate bacteria, which the crab eats.

The Yorkshire Terrier is a small dog breed of terrier type, developed during the 19th century in Yorkshire, England. The definitive source of the breed was a dog named Huddersfield Ben, born in 1865. Yorkshire Terriers are affectionate, loving, and loyal companions.

The Yuma myotis (Myotis yumanensis) is a species of vesper bat. It can be found in northwestern Mexico and the southwestern United States. These bats roost in caves, trees, and buildings. They are insectivores, eating moths, beetles, and flies.