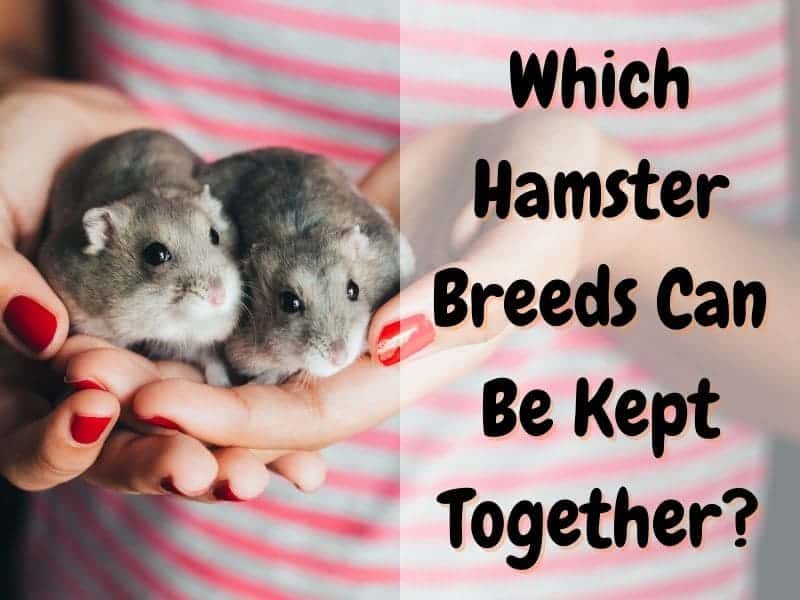 As humans, we often do not like being in isolation, so we tend to assume that other species would not like it either. Because of this, if you are getting a pet hamster, you might feel tempted to get two or even more so that they have friends and can be social. But is that really a good idea for your hamster’s well-being?

The truth is that it does depend on the species and temperament of your species. While dwarf hamsters can do perfectly fine living in groups, Syrian hamsters must be kept on their own. And even some dwarf hamsters will get territorial and aggressive with each other. In this article, we will explore this topic a little more by taking a look at each specific hamster species and some overarching tips and tricks for successfully housing hamsters together.

Can Syrian Hamsters Live Together?

When most people think about hamsters, what they are picturing is a Syrian hamster (also called Golden Hamster). Syrian hamsters are the larger of the hamster species, and they tend to be solitary in nature. Because of this, it is important to only put just one Syrian hamster in an enclosure. Even in the wild, Syrian hamsters typically only meet up with each other to mate, and then they go their separate ways.

Can Chinese Hamsters Live Together?

The Chinese hamster or the Chinese dwarf hamster can do fine living in the same cage in pairs or small groups; however, it does depend a lot on the individual hamster. If you can get several hamsters from the same litter that is used to sharing a space, you are going to have the most luck. However, you should be on the watch for any signs of fighting, even if they come from the same litter. It really does depend on their personalities.

If you are looking for a cute, small breed of hamster, this breed might be the best option for you. Winter white dwarf hamsters can live together in same-sex pairings, or you may even be able to keep them in small groups if you have a large enough cage.

However, it can be a toss-up with this breed. That means that while some winter white dwarf hamsters do great living in groups for their whole lives, others do much better in solitary. This means that you are going to want to keep a close eye on any winter white hamsters that you have sharing an enclosure. Be on the lookout for signs of bullying or fighting and have a second enclosure ready in case you end up needing to separate them.

Can Dwaft Roborovski Hamsters Live Together?

The Roborovoski hamster (also referred to as the Robo hamster) only reaches about 7 cm in length. They are one of the most sociable hamster breeds, so if you are really hoping to keep several in one enclosure, you definitely want to consider starting with this breed. However, they can be difficult to handle because they are extremely active. They will not want to be held or played with for very long.

Nevertheless, it is important to understand that with even the sociable Robo hamsters, there is always a chance that two hamsters or a small group of hamsters will not work well together. If you are looking for a breed of animal that you know will do really well together, check out the later section titled “What Small pets Can Live Together?”

How Many Dwarf Hamsters Can Live Together?

For the most part, dwarf hamsters can live in small groups of up to about 4 or 5 hamsters if you get a group that is particularly sociable and gets along well without lots of fighting and aggression. However, if you want this many hamsters at one time, you are going to want to get them all at once, at a young age. If you get several hamsters now and try to introduce one later, you run the risk of the hamsters not being welcoming to the new group member.

What Precautions Should Be Taken When When Keeping More Than One Hamster?

1. Introduce them When They Are Young

When hamsters grow into adulthood, they become significantly more territorial, so pretty much any time you introduce two or more adult hamsters, they are going to fight. Because of this, it is best to introduce young hamsters to each other if you want them to share one enclosure. This means that they will grow up already used to sharing the space with each other, so they should end up feeling a lot less territorial.

2. Be Aware of The Genders

If hamsters feel like their resources are scarce, their natural instincts will kick in, and they may become more aggressive toward each other. By providing several spots inside the cage where they can get food and water (at least one per hamster would be best), they are much less likely to start fights over resources.

4. Keep An Eye On Their Behavior

Even hamsters that have been living together their whole life could start to get more territorial or irritable as they get older. For this reason, you should always keep an eye on how your hamsters are behaving toward each other. If they start to harass each other, fight, or prevent each other from getting to the food, you are going to want to separate them.

For this reason, you will want to have a backup enclosure at least partially ready in case you ever need to separate them. After a week or two, you can try to reintroduce them if you want, but if they are still not getting along, you will need to move them into separate enclosures permanently.

How Big Should A Cage Be For Several Hamsters?

As a general rule, the more space that you can provide your hamsters with, the less likely it is that they will fight. Additionally, while hamsters are very small creatures, they are actually very active and need a good bit of space to explore and play.

It is also not recommended that you keep multiple dwarf hamsters in a cage with levels even though you may feel like it offers them more space. This is because one hamster might “claim” a certain level as theirs and become aggressive if other hamsters try to enter or go through it.

Yes, pretty much all dwarf hamsters will be happy living on their own, even if they would also do fine living in a group. This is because hamsters tend not to be particularly social creatures and often live on their own, even in the wild. Unlike some other animals that you almost have to get multiple at once to care for their needs properly, you can feel perfectly fine just starting out with one hamster.

However, if you decide to start out with just one dwarf hamster and decide that you want to get another, later on, you are going to have to have space for multiple enclosures. They do not typically do well sharing an enclosure when introduced as adults because they are fairly territorial animals.

Can Different Breeds of Hamsters Live Together?

When looking at two different dwarf hamster species, it can seem like they are similar enough in size and appearance that they could be housed happily in one enclosure. While there may be a few people who have had success with this, it is almost never recommended. This is because while two dwarf species may look similar, they often have vastly different temperaments, and some take a lot better to sharing enclosure space than others. If you are going to try to get several hamsters together, it is best to stick with same-species pairings.

You should also never stick a Syrian hamster in the same enclosure as a dwarf hamster. Syrian hamsters do not do well sharing their space with other animals, and because they are so much larger than most dwarf hamsters, they could end up seriously hurting your other hamsters.

What Other Small Pets Can Live Together?

link to Hamster Names: 200+Unique & Cute Names for a Hamster!

When you first bring home a cute and fluffy hamster, the excitement of having your own little friend might overwhelm you. It can be tempting to call it just about anything, but if you want to get...