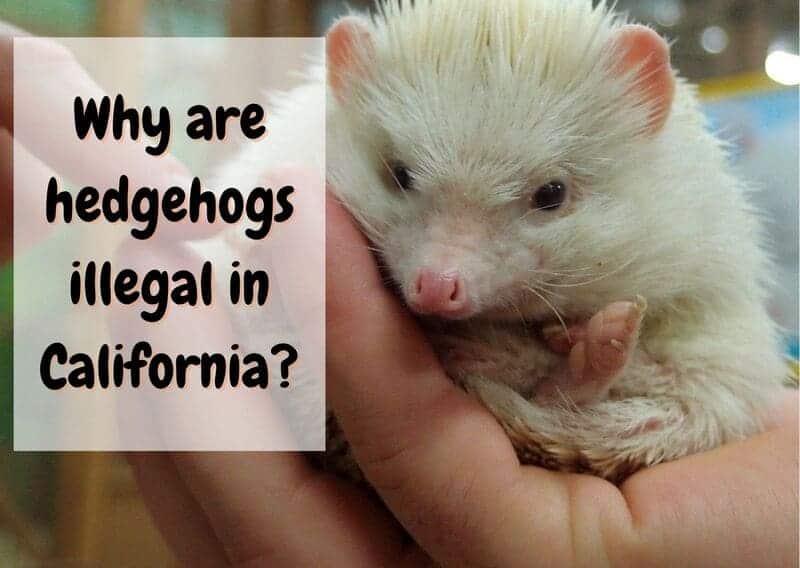 Hedgehogs have become very popular pocket pets across the US for the past decade, but they are still forbidden to own as pets in certain states. Which begs the question, “Can I own a hedgehog in California?”

A simple and straightforward answer is: unfortunately, you can’t.

In this article, you’ll find out why they are banned, where else they are considered problematic, and what alternatives there are if you live in a state that doesn’t allow a hedgehog at all.

Why are hedgehogs illegal in California?

Hedgehogs are illegal in California because it is feared that pet hedgehogs might escape into the wild and form colonies which could endanger the state’s fragile ecosystem. A rapid expansion of a non-native colony could also endanger crops and other animals in the region and create an imbalance between species.

The Department of Fish and Wildlife has a whole list of non-native species that are banned to protect agriculture, crops, and wildlife as a whole. Because of its ideal climate, it is feared that species like hedgehogs may thrive in their new environment and endanger other native species.

Under constitutional laws, each state in the US is authorized to develop, enact and enforce its own laws and constitutional provision. Because of this, dozens of pets are completely legal in the neighboring states, but they are not allowed to be kept in California. You can only own them under special conditions and with a state-delivered permit, like if you are a pet trainer or caretaker for cinema and TV shows, or if you own a private zoo.

What other pets are illegal in California?

Here is a list of some commonly-owned pets across the US that the Golden State does not allow:

Other pets include select species of cats, dogs, and rodents. You will find here a complete list of the animals that are not allowed to be kept as pets under Californian law.

What other states ban hedgehogs?

For a species that is commonly found all over the world, the hedgehog has a few US states that don’t welcome this pet. These include not only California but Georgia, Pennsylvania, Hawaii, Washington D.C., and all five Boroughs throughout New York City.

Most of the state laws are hard to overturn due to the fish and game limitations and the threat to local species. However, hope exists for residents in these states that are desperate to own an exotic pet: it was previously illegal for Washington D.C. residents to have a hedgehog as a pet, but as of January 22, 2019, this ban was lifted, yet the news is hard to spread online.

States where hedgehogs are not banned but under some restriction

There are some restrictions in many states that require you to have a permit. Previously it was reported that Wyoming was one such state that added this but not until February of 2020 was this proven false. You don’t need a permit to own a hedgehog in this state at all anymore.

The states that currently require a permit include New Jersey which will cost you 10 dollars per year. Another state is Wisconsin which has a clause called the Animal Movement Import Permit that requires special hedgehog application paperwork if you move in from another state.

What happens if you illegally own a hedgehog in California?

The laws are harsh if you get caught owning a hedgehog in California and will include fines and possible jail time. The first step is being slapped with a Civil Fine that makes you responsible for the removal of the animal, care, and storage. This can cost anywhere between $500-10,000 depending on how severely the authorities locally will deal with you and if there were other or previous offenses.

Then there is further Criminal Prosecution which is considered a misdemeanor in this state. This can ultimately lead to 6 months in county jail and a fine of $1000 by the state.

The US has many laws that are passed to limit the number of exotic pets in each state. Twenty states have a comprehensive ban on exotic animals that are considered dangerous. Then it goes on to include another 13 states that have included partial bans for exotic pets that aren’t considered native animals to that state.

Additionally, 14 states allow for special permits of exotic animals for private ownership. These are often animals that are dangerous and need special enclosures and habitats. Lastly, there are only 5 states that do not actually require any kind of law regulating exotic animals.

What alternatives to hedgehogs do I have in California?

There is hope on the horizon if you want to have a pet with quills. Two animals aren’t illegal to own in California that look very similar to the hedgehog. The first is called the Echidnas, which come from Australia. It is also called the spiky anteater and impressively lays eggs. It might not be so easy to get one of these locally but that doesn’t mean they aren’t illegal to own.

The second choice is the prehensile-tailed porcupine also called the Brazilian porcupine. This spiky guy looks similar to a hedgehog but is larger than a house cat. If you’re looking to have something really different, a porcupine does make a pretty decent pet.

There are still many exotic pets you can own in California, some of them of pocket size. For example, you can own across the Golden State one of these exotic creatures: