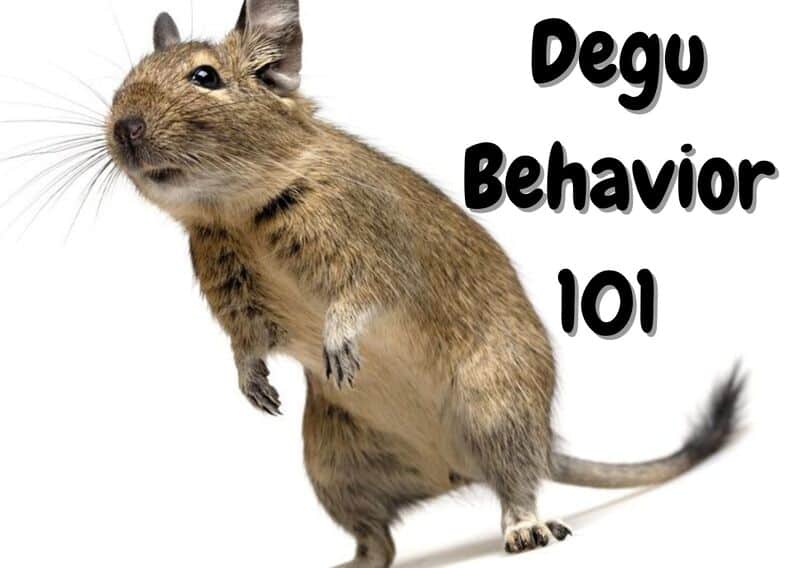 Signs of a happy degu

This means they are alert and aroused by a degu in their group. This is most often part of mating behavior.

When you first get a degu, they will likely fluff their hair up making themselves appear bigger. This means they feel threatened by someone they don’t know or are not comfortable being around. This behavior is normal at first and should ease as your critter gets used to you and its environment.

This is considered playful behavior for degus, especially when they are younger but can also be seen in grown-up degus.

This is another part of playful behavior but is also a defense mechanism that they show when in danger. They can bolt to their burrow when they feel threatened.

This is when a degu raises their rump in the air. It may symbolize dominant or submissive behavior. You see this more often with courtship and mating rituals.

Commonly, degus like to groom each other as a sign of friendliness. They will do this with a degu buddy they like. It can also occur that your degu will groom you to show they like you.

Degus pee on anything they feel is their property – food dishes, toys, and items they want to mark. Some degus will overmark something that’s already been marked as a sign of dominance.

This is really an argument between degus that is non-violent. It’s a show of strength that can end easily enough. Unless both are pushing the limits, it rarely ends in a fight.

Because degus are very social, they will commonly bond with others for comfort. They like to snuggle to keep warm and feel safe. It’s a common sight that degus will sleep in piles as normal social behavior.

This is a sign that a degu is signaling others of trouble or some danger near to them. They also do this to let others know they should be aware and pay attention.

This isn’t to harm you in any way but is actually a grooming practice. This means that they like you so much they’ll be willing to groom your skin.

Signs of an unhappy degu

From time to time degus will react to dangers they perceive are affecting them. They will sound off with foot thumping and warning calls to alert the others in your habitat. If there is danger close by they will retreat by bolting and go into their burrows.

Bites can occur with young degus. These won’t hurt much since they are small, so it’s better to tame them first. A grown degu can bite if you bother them and ignore their warning signs.

3. Repeats the same thing over and over

While some degus repeat certain behaviors such as back flipping, other negative behaviors might be a sign of illness. It’s not uncommon that a degu can suffer from ADHD, which is Attention Deficit Hyperactivity Disorder. This can lead to a degu repeating the same thing over and over. Not that they won’t do natural motions, but 10 backflips in a row is a sign that something is wrong.

Degus will only chew their cage when they feel their habitat is too small for them. It’s a built-in habit for all rodents to do this and is also a sign they are unhappy that their space is so limited.

It’s the nature of degus to be mildly aggressive since this is normal behavior within the hierarchy. The boss of a group will bully the other Betas in the group with full intent. Sometimes the Alpha male will aggressively attack and antagonize others or have a favorite that they bother more often. This is a behavior that is very similar to ADHD but could also mean they are excessively dominant.

If you have one degu that is hurting another on purpose, you have to remove that one from the group.

Degus have been known to become lethargic at times, although this can stem from poor nutrition. If they are not getting enough nutrients in their diet, they will experience periods of lethargic behavior. A balanced diet needs to be maintained so you don’t have to visit the vet.

Alpha male attitude is established with males at just 3 months if not sooner. They develop this behavior to establish the hierarchy and is perfectly normal for male degus.

The head boss of a group will show their dominance in the group by continually antagonizing the weaker Beta degus. The Alpha will even show dominance by mounting other males in a show of strength and will also mark their territory as they wish.

Beta degus do try to challenge the alphas at times and there will be fights that result. Even if a dominant Alpha has marked a spot, Betas will even mark these spots as an attempt to gain some respect, only to have them overmarked by the Alphas later.

Females can be aggressive with other females through fighting and biting. They can be just as antagonistic with males too, but not so often. A female will attack a male that tries to mount her if she doesn’t recognize or like that male.

Gestation for a female is about 90 days, and in that time, a female will be laid back and not as active as the other females and males.

Degus have unique behavior that includes touching noses, tail wagging, shaking, cuddling, grooming, and chasing each other around the cage. After mating is complete, a male will proudly squeak with a series of chirps for 20 minutes.

Sounds of a happy degu

This is a greeting call that a degu gives you when you approach their habitat. It’s a unique call that is unlike other noises they use and indicates that your degu is tame and happy to socialize with you.

These are noises that degus use to communicate with each other. These are also used for mating and courtship.

This is an exclusive sound that is made from young degus that are considered a social call. Degus will also make this noise when they are grooming each other.

This sound is used when your degu is playing or they are excited about something.

This is used in greeting behavior between degus and with their owners. This sound happens when degus have nose-to-nose contact.

This is a grooming sound but isn’t a sound of pain at all. it’s to let the other degu know that they are grooming a bit too enthusiastically.

This is a sound used by females that are nursing little pups whether or not they are lactating or not. They may make this noise 5 times in a row during warble and whining sounds.

This noise comes from little pups and will repeat it at least 15 times in a row. This only starts around 2 weeks of age.

This is done when your degu is happy and content with something. This will sound like a low-volume chewing sound.

This is a high pitch repeated warble sound that is pleasant to hear. It sounds similar to a repetition of bleeping several times in a row.

Sounds of an unhappy degu

This sound tells you that your degu is nervous or annoyed by something. A frightened degu will go on for several minutes of squeaking. For whatever reason, they can do this while being groomed, so it’s not always a bad thing.

They will make this loud chattering sound when they are nervous. If they are annoyed, they will also make this sound.

This is heard when a degu is experiencing antagonistic situations. It will sound like a high-pitch flying bullet. It’s also a sign of distress or a mild warning.

This noise is unique since it has a two-part tone. The first is the Eh-Heh and then the big Ohh afterward which sounds comical. It’s to prevent more threats or being bothered after boxing.

This sounds like grinding ice skates that have chittering overtones. This is used to signal other degus but is also a warning to ward of antagonist behavior.

This chirp sounds very watery and warbling-like and is used as another warning to others telling them not to bug them. This helps an approaching degu know they don’t want trouble.

This sounds like a barking noise rather than weeping. They do this with an open mouth and pinned back ears. It’s to warn others about their concerns and alarms. It’s simply a warning call for other degus to get ready to flee.

This does sound a bit like you’re biting the top of a celery stick repeatedly. This is during encounters that aren’t going so well. A degu will grunt in distress to being bothered by another degu.

This is an outward tweeting sound that is considered a barking noise. This is a warning noise that is only used after a male has finished mating. It’s a warning to other males to not approach his female.

This is another post copulation noise that is made by males that sounds like a repeating mouse-like squeak.

This is used as a warning sound and also the sound of physical pain.

This is made by pups that get isolated from their group at some point. They’ll sound off with a ling winded squeaky toy sound that’s repeated several times.

This is a series of whines to groans when two degus are fighting over food. Degus will commonly fight over food despite their social atmosphere.

Do degus get lonely?

Degus are incredibly social and like living in groups. It’s best not to own only one degu for this reason and a degu will fare better if he has a buddy or partner. If they are separated, they will require at least one buddy in their habitat.

Can you let a degu roam around the house?

If you have a plastic roaming ball, your degu can roam around within reason. They will be curious to search around the floor as long as they aren’t spooked by other house pets you may own – this would be too traumatizing for a degu to deal with.

What are the symptoms of a dying degu?

Degus might suffer from diabetes which might happen if they are not getting the right diet and nutrition. If they are suffering from diabetes and are in the early stages of dying, they will act drunk and have eyes that appear grey. They can also spend most of their time laying on their side and being too weak to move around. If nothing is done to help them, it won’t be too long before they soon die.