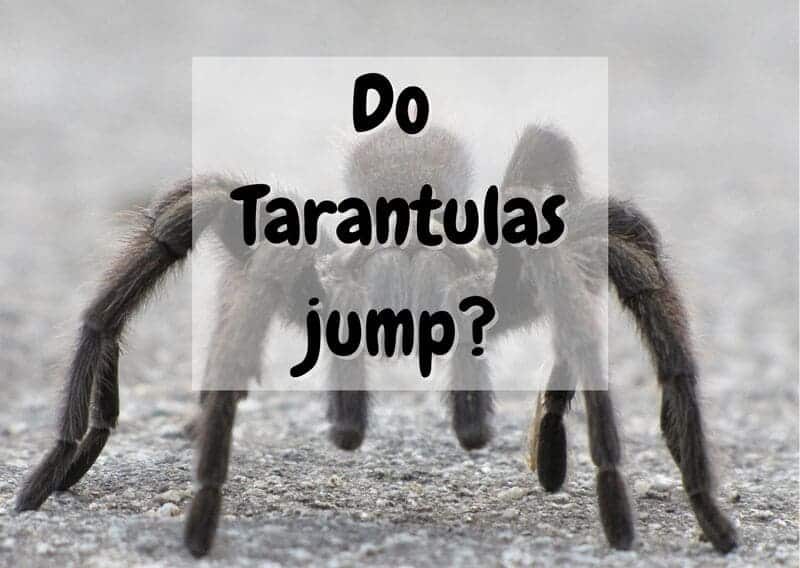 Tarantulas are surprisingly docile in captivity and in the wild would rather avoid humans if at all possible. This article won’t cover all misconceptions about tarantulas but it will answer the question of whether tarantulas can jump or not.

So, do tarantulas jump? Some species of tarantulas will run and hop as the last resort to escape predators, but they never actively jump to hunt. Tarantulas are not known to jump at humans as we are too big a threat to them.

Tarantulas are rather misunderstood creatures, and we hope that this article can shed some light on this misconception. You will learn that tarantulas are not out to get you. Yes, they may climb walls or trees, but they are less interested in you and more interested in waiting for their prey.

Do Tarantulas Jump At All?

The first important thing to understand about tarantulas is that they can be categorized into two different categories. The arboreal tarantulas and the terrestrial tarantulas.

Arboreal tarantulas spend most, if not all, of their lives in trees, shrubs, or vines. The terrestrial species will live the majority of their lives on the ground or in burrows. Of course, nothing is stopping an arboreal species from leaving the trees for a bit, or for a terrestrial to do some climbing.

While arboreal tarantulas can drop from a tree, it’s not for hunting purposes but rather, a last defense of sorts. When a tarantula feels threatened, its first means of defense is to rear itself on its back legs to bear the front legs and fangs, a rather intimidating “back off” sign.

If that doesn’t work a tarantula will either retreat back to its burrow or throw hair from its abdomen. Tarantula hair is very irritating especially if it gets into the eyes or tender skin. Tarantulas are not interested in biting or fighting if threatened, only running away.

Arboreal species lack the luxury of a burrow to hide in. If their threat display doesn’t work and their hairs aren’t having any effect on warding off a predator, they will have to make what is essentially a life-or-death decision and jump to safety.

When jumping a tarantula will typically jump forward or to the side, trying to hook onto a branch or leaf and away from whatever is attempting to eat them.

To summarize, Tarantulas aren’t jumpers. It’s too much of a risk to take anything resembling a large jump and it won’t help catch prey either. So jumping is simply a waste of valuable energy and the risk of injury or death makes jumping even more unlikely for tarantulas unless they are truly in a dire situation.

I’ve Seen Videos Of Tarantulas Jumping At Food, What Gives?

If you’re interested in tarantulas or have a friend that enjoys sending you tarantula videos to freak you out, chances are you have seen videos where tarantulas appear to be jumping at their food. Like this one from a famous tarantula channel called Exotic Lair.

This is not so much jumping as it is pouncing. Tarantulas will pounce on their prey once it’s right in front of them to subdue it as quickly as possible. In the wild, a tarantula can go days without a meal. So if a prey passes by, it won’t take the chance of a meal running away.

Videos of tarantulas quite literally jumping at their prey are the result of being conditioned, that is, constantly hand-fed with tweezers.

Other times it’s a very aggressive species such as the Orange Baboon Tarantula that is trying to actually attack the camera. You might notice the “back off” stance in those videos. Videos like those should be treated as the exception and not the norm.

Now, you might have seen some videos of spiders jumping quite a long distance, using their rear legs like a spring. This video from BBC Earth shows the Hyllus Gigantus went viral a few ago, triggering panic among arachnophobes.

You have every reason to stay calm: the Hyllus Gigantus is not a tarantula. Although it looks big on camera, its tiny body is only 1 inch (25 mm) long and this spider is completely inoffensive.

They don’t have muscles but force blood at high pressure into their legs, causing an impressive hop, up to eight times their body length.

It looks impressive on camera, especially if you do not know the size of the spider; in real life, though, you would probably see it as a cute little skip from an inoffensive critter.

Why Do People Think Tarantulas Jump?

According to Hollywood, tarantulas just have it out for humans and this isn’t helped by old horror films that had tarantulas jump on the actors. In reality, the tarantula or a fake one was just thrown or dropped on the actor.

In adventure movies, tarantulas are popular animals to be placed in locations that are dangerous, like the wilds of Africa or South America. A character in “Indiana Jones” gets covered in tarantulas, all played by harmless Mexican Red-Knees.

There is also the shock value of tarantulas with television shows like Fear Factor having contestants handle or be around harmless tarantulas.

Besides the media, tarantulas are just misunderstood by the average populace so tales of tarantulas that jump at people to attack them are quick to gain ground.

They can spread just about anywhere, from the playgrounds where children tell each other tales, or from ancient chain emails that would feature pictures of harmless tarantulas with warnings about how dangerous the tarantula was.

Tarantulas just so happen to fit the look of an animal that is scary or threatening, when in reality you would have to be the size of a cricket for a tarantula to be a real threat to you.