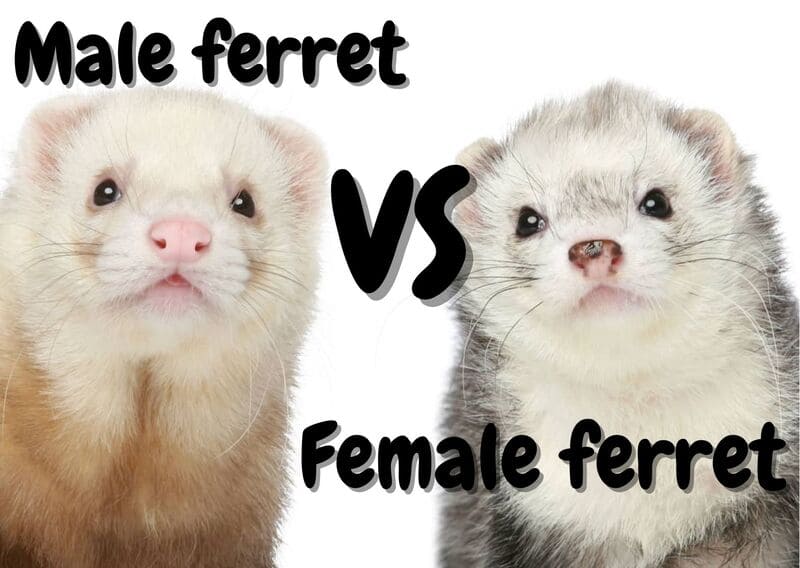 Ferrets are such fun pets to have. They have spunky personalities, and they tend to be very inquisitive and intelligent. However, when you are considering bringing home a new ferret, you may be wondering whether or not you should get a male or female ferret. The truth is, besides size and behavior when not de-sexed, both genders are very similar.

In this article, we are going to go over all the different things you may want to consider when deciding whether you want a boy ferret or a girl ferret.

What Are The Differences Between a Male and a Female Ferret?

Keep in mind that there can be some overlap in size between males and females, depending on their genetics. If you are looking for a smaller or larger ferret, it is best to ask the breeder for information on the size of the parents to get a better idea of the size your ferret will be.

3. Difference in the age of maturity

When male ferrets become about nine months old, they become ready to start breeding. At this time, if you have not gotten your male ferret neutered, he will start trying to breed rapidly. Male ferrets do not have heat cycles as females do, so they will try to reproduce whenever they have access to a female.

Female ferrets are really only concerned about breeding when they are in heat; however, whenever they are in heat they will not stop looking for a mate until they do so. If a female ferret does not mate, the heat cycle will continue, which can be rather dangerous. You can expect your female’s first heat around nine or ten months, so you will want to get her spayed before then.

Ferrets, no matter their gender, all develop their own unique personalities, so you will not be able to tell whether or not your ferret is a male or female based on their personality. All ferrets are typically very intelligent and inquisitive creatures. They also tend to be excitable and mischievous, which is why they are known to cause trouble if they do not have enough to do or are left alone unsupervised.

Now, that does not mean that they should be left in their enclosure all day, every day. No matter how good your ferret is at entertaining himself, he will want to spend time exploring, running around, and playing with you, other ferrets, or even other household animals.

5. Difference in temper and behavior

When they are fixed, male and female ferrets have very similar temperaments and behaviors. However, when they are not neutered, there may be some temperament differences. When male ferrets reach sexual maturity and start to rut, they become both very territorial and aggressive. Males may attack other ferrets, other animals, and even people. They will also try to breed with any female they can find.

Female ferret behavior does not change a lot when they go into heat unless she is unable to mate. If a female ferret does not mate, the cycle is continuous, which can lead to the fatal condition called aplastic anemia due to too high estrogen levels.

Other than in heat and rut, both female and male ferrets are very friendly, playful creatures. They are natural hunters, so they should not be left along with lizards, rabbits, rodents, fish, birds, etc., but they are known to get along with most people, dogs, and even cats.

6. Lifespan of both male and female ferrets are the same

There is no difference in lifespan based on gender. In the wild, most ferrets live somewhere between one and three years. On the other hand, in captivity, ferrets tend to live four to six or even eight years. Some ferrets have been known to live for ten or more years, though that is rare, so you should not expect it.

As long as you take proper care of your ferret’s grooming needs and keep the enclosure clean, the smell should not be too bad. Furthermore, de-sexing your ferrets can help minimize the smell significantly. Male ferrets in rut and female ferrets in heat can get really smelly, really fast. Males tend to have a stronger smell than females unless they are neutered.

8. Cost of Neutering or Spaying ferrets

Both ferret neutering and spaying can be done at most veterinary practices. They are also both relatively quick procedures, so you should be able to pick your pet up the same day you drop them off. Neutering a male ferret should cost you between $50 and $80 USD on average.

Because spaying is a more complicated and dangerous surgery than neutering, it will likely be slightly more expensive. The cost of neutering a female ferret is generally between $80 and $120 USD.

In the United States, the majority of baby ferrets or kits are sold between twelve and fourteen weeks old and have already gone through a de-sexing surgery. However, some experts do recommend that you wait until later to get your ferret desexed. If the ferret that you adopt has not yet been spayed or neutered, you will need to do so at around 6 months old and definitely before nine months.

There are not a ton of differences between male and female ferrets when it comes to grooming. Both genders need to be bathed every couple of months in order to keep their coats both soft to the touch and healthy. You will also need to regularly clean both their ears and teeth (about every two weeks) in order to prevent infection. Finally, you will need to trim your ferret’s nails at least once a week to prevent your ferret from ruining furniture, injuring people, or injuring themselves.

Can Two Ferrets Live Together?

Yes, two or more ferrets can live together perfectly happy, though you will need a bigger enclosure. In fact, ferrets are often happier when kept in pairs, especially if you are gone for most of the day. As far as enclosure goes, six cubic feet (18 inches tall and 24 inches wide) is plenty of space for one ferret. For a pair, the cage needs to be at least 20 inches tall and 40 inches wide, but bigger is better, and having multiple levels with ramps to run on and hammocks to nap on is best.

Do Ferrets Have To Be In A Pair?

Your ferret will likely be happiest if kept in a pair or even a small group, especially if they are littermates. However, if you are going to be home all the time or have other household pets they can play with (supervised), it is not necessary. On the other hand, if you are going to be at work, school, or out somewhere regularly, you will need multiple ferrets, or else they could get depressed.

Is It Better To Have Two Males, Two Females, Or One of Each?