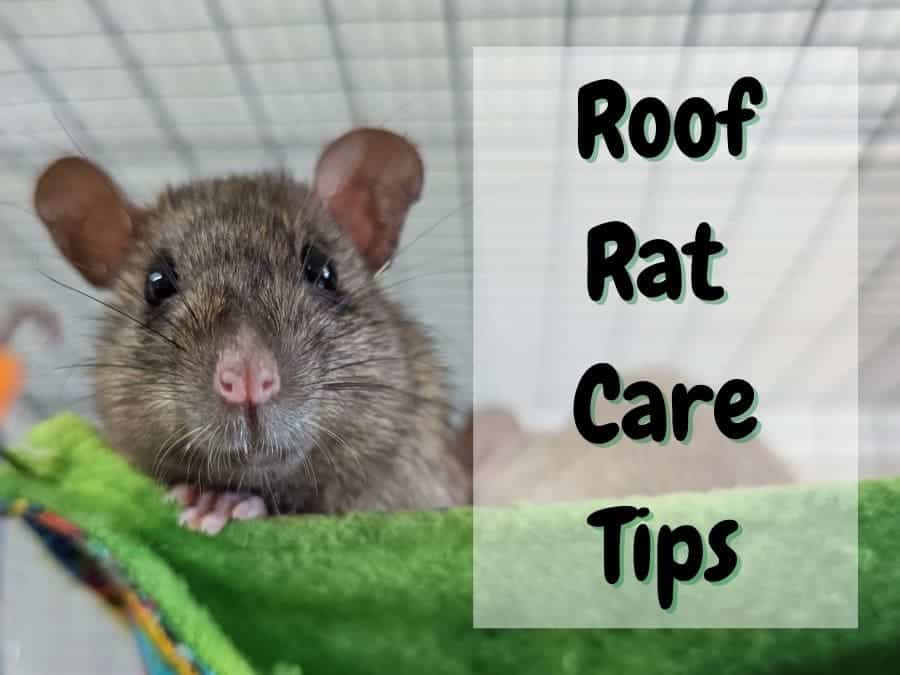 Have you heard of the Roof Rat – aka Ratus Ratus? Not your regular rodent – this breed of rats is different from Norway Rats which are more commonly kept as pets in the U.S.

To know more about the Roof rat we have reached out to Brian from OC Dumbos, who breeds them in Kissimmee, Florida. He has kindly answered all questions we have about Roof rats.

So without further ado, let’s learn more about these unique critters.

Where Do Roof Rats Come From?

Roof Rat species originated in South Asia.  There are some related species found in southeast Asia which live in cane and rice fields.  Both Roof Rats and Norway Rats are considered to be a pest and invasive species, as they tend to exploit human agriculture and food stores and follow the movement of humans to colonize almost every habitat where humans can be found.

They are intelligent, hardy survivalists that can eat almost anything, have several litters per year, and outcompete many native species.  To be fair, aside from the reproductive rate, humans have many of the same negative traits, so we have a lot in common with them!

In What Ways Are They Different From Usual Fancy Rat Breeds?

Roof rats are arboreal, which means they live in trees. They have longer, slender bodies and limbs, and longer digits with nails for gripping.  Longer, semi-prehensile tails to help with balance and even wrap around branches to prevent falling.

Animals living in trees are more able to avoid each other and so are not forced to deal with other rats they don’t like.  They tend to solve problems by avoiding and running away from them, rather than standing and fighting.  And, with their long legs and digits with grippy nails, they are really good at getting away when they want to.

Consequently, if a Roof Rat really doesn’t want to be with you, they will try to escape rather than bite or something.  Nobody wants to get bitten, so I consider this an advantage over other animals that would rather fight.

But we do always caution people to play with their Roof Rats someplace with few hiding places until they get to know you.  Once they like you, they won’t be looking to escape…they’ll be looking for a treat, instead.

As for special requirements, keep in mind that they are vertically orientated, so they will sleep in hammocks, not on the ground.  They like climbing and jumping, so give them opportunities to do so safely.  They will chew on anything chewable, and sometimes get sick from it, so be careful what they can reach.

They don’t like sitting still unless they are eating, so don’t demand that they let you pet them like a cat or dog (or even a male Norway rat.)  They will show their affection in other ways: if you hear them making a chittering noise while they are climbing around your body, that means they really love you!  If they close their eyes and tilt their head when you stroke the side of their face, they are really enjoying that!

What Do Roof Rats Eat?

I purchased galvanized wire cages from Pointerhill in PA but I tell them to put the door in the front instead of the top.

I then use a mix of Fresh News pelleted paper cat litter and Tractor Supply’s Cozy and Fresh which is made from pelleted kilned powdered wood and activated charcoal.  I also sprinkle some Zeolite on the bottom of the litter tray before adding the litter, which makes it easier to clean and also absorbs ammonia.

I use a bowl attached to the side of the cage because many roof rats tend to play with water bottles and dump out all the water.

I use a hammock for sleeping.  Then decorate as you wish, but avoid chewable things like plastic.

How Long Do Roof Rats Live?

4-5 years if you take good care of them.  And they tend to get fewer tumors than Norway rats, so their medical expenses are less.

How Big Do Roof Rats Get?

Females about 200 grams. Males about 300 grams. They are about as long as Norway rats if you include the tail.

Sleepy during the day, but always willing to play if you want to take them out (or feed them.)

Often active most of the night.

Young ones are often a bit timid and wary until they know you.  Being careful, aware of possible dangers, and ready to run and hide is how they survive in the wild.  They don’t like to stand and fight if they can possibly avoid it.

Once they know and trust you, they will treat you like another rat (albeit a big, dumb, stinky one.)  That means they will climb all over you, use you like a tree, basically, steal your food, beg for more food, and nip you a little if you don’t get the message and give them a treat quickly enough.  They can be very food orientated (hence easy to train.)

If you put two Roof rats together that don’t know each other, they may fight.  Females are just as scrappy as males, and will even attack males that are a bit bigger than them (and they will usually win.)

They will generally be happier with cagemates.  But some Roof rats prefer to be alone or with the opposite sex but not the same sex. They are friendly animals, so if they have a cage mate that they like and get along with, they will snuggle with them and mutually groom each other.  No doubt, that is an ideal, happy life–IF that’s what the roof rat chooses for itself.  But, if he/she doesn’t want a cagemate, never try to force that on them.  They can badly injure and even kill each other.

If someone on the Internet tries to tell you otherwise, please keep in mind that most people only know what they have read or heard from others, and almost nobody has first-hand knowledge about Roof Rats – except for us.

How Much Do Roof Rats Cost?

If you get them from us, the rats are free.  The cage and stuff will cost about $100-$200.  Food is a few bucks a month.  If your rat gets sick, vets can be expensive (but if you call us, we can maybe advise you what to do, and we won’t charge you a penny.)

These rats have been selectively bred for many generations to be calmer, tamer and  friendlier than “wild roof rats.”  That said, they will, on average, still be a bit more active and reactive to potential dangers than a typical Norway rat.  Part of that is because they are still a “work in progress”, and every generation gets closer to where we want them to be.  And because they are not fat, lazy burrow-living rats!  They are slender, athletic tree-living rats, and it is not our goal to change their basic nature.  Just to make them better versions of themselves.  They can make great pets for people that are OK with that.  We love them!

I also suggest you have a look at my online training about Roof Rats care and ownership as many of your questions are addressed there.

A big thank you to Brian from OC Dumbos for kindly providing the information and photos needed for this post. Brian told us more about his life as a rat breeder in this article. If you want to reach out to him, you will find his details below.