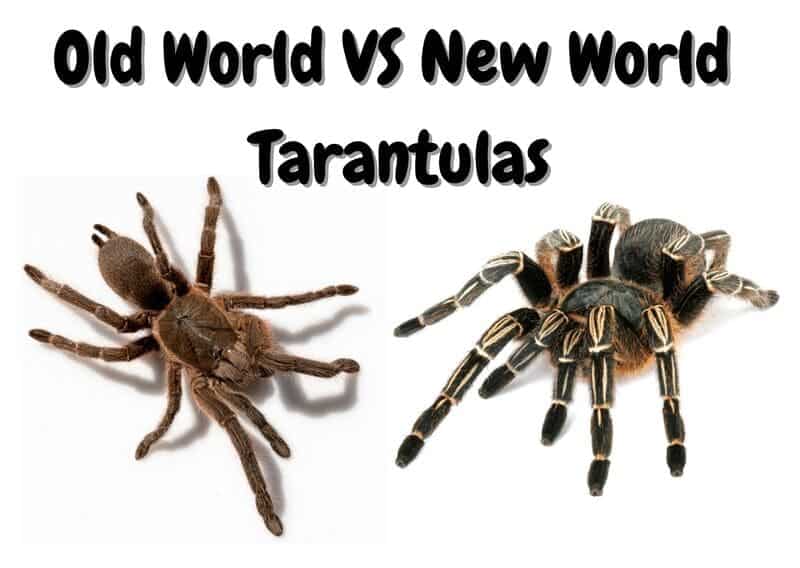 Once you start to research tarantulas, you are going to quickly run into the terms New World and Old World tarantula, and there is often not much explanation as to what exactly that means. However, when you are trying to pick a tarantula to bring home, it is important that you understand the differences, so you do not end up with a spider you are not ready to handle.

In this article, we are going to go over all the important differences between Old World and New World tarantula so you can understand what people are talking about when they call one spider Old World and another New World.

The terms Old World and New World were actually coined to describe different locations. After Christopher Columbus “discovered” the Americas, the Europeans started to refer to North and South America as the New World and areas that they had known about for longer (Europe, Africa, and Asia) as the Old World.

The most full-proof way to figure out if a tarantula species is New World or Old World is to figure out where it originates from. If it is from Africa, Asia, or Europe, it is considered Old World. Tarantulas that are originally from Australia are also considered Old World because they are most similar to those found in Africa, even though Australia is not technically Old World because it was not recognized until the 17th century.

On the other hand, New World tarantulas are any that are from the western hemisphere or North and South America.

On the other hand, New World tarantulas are generally much more suited for beginner tarantula owners. They move much slower than Old World tarantulas, and they tend to be much less aggressive. If you are looking for a tarantula you can handle, it is better to look at some New World Species.

Tarantulas can fling their hair as a defense mechanism against predators. However, this is only the case for New World species. New World tarantulas have what is called urticating setae hairs that cover their upper back. These hairs have barbs that can puncture the skin of some predators and are extremely irritating. The urticating hairs are the New World tarantula’s primary mode of defense.

The exact effect of these hairs on humans varies from species to species, and it depends on how sensitive you are. Most of the time, the hairs will cause itchiness, a skin rash, or some painful irritation. While they usually only cause mild side effects, it is best to see a medical professional whenever you come in contact with the hairs because there can be more severe reactions, especially if you accidentally breathe some of the hairs in.

There is actually a lot of similarities between caring for Old World vs. New World tarantulas. For instance, they both have very similar diets. No matter what kind of tarantula you have, it will need a diet made up primarily of insects.

Most owners feed their tarantulas crickets. Many species will only need one or two crickets a week, while large species may need closer to six crickets. Tarantulas can also eat other insects like roaches and waxworms, and you can even mix some fruits into your tarantula’s diet.

They are also very similar when it comes to housing. The general rule of thumb is that the enclosure needs to be four times longer and four times wider than your tarantula when its legs are fully extended.

Now, how exactly you need to set up the terrarium (and what shape you need) does depend on whether or not your tarantula is a species that likes to burrow and live on the ground (terrestrial tarantula) or climb up in trees and other structures (arboreal).

On the other hand, Old World tarantulas are much more delicate and will not enjoy being picked up or handled. If you do, they are more likely to either bite you or get out due to their quick speed.

Mexican Red Knee tarantulas are similar to what you likely picture when you think of a tarantula with black and orange coloring, especially if you are a beginner tarantula hobbyist. Additionally, they are one of the most docile species of tarantulas, making them a great option for beginners. If they ever do feel threatened, they will almost always run instead of bite.

Chilean Rose tarantulas are a little bit harder to handle than the Mexican Blood Leg, but they are still a really docile species. They can get rather nervous and may fling their urticating hairs in your direction if they feel threatened, but their hairs are only mildly irritating, and they almost always will try running away first.

If you feel ready for a tarantula that is a little bit more challenging but not quite ready to jump into Old World species, the Antilles Pinktoe is a great option. These arboreal tarantulas are really interesting to look at with their electric blue hairs and rusty highlights all over their bodies. However, since they are very agile and are a little bit more skittish, it is best to handle them with care and move them when absolutely necessary.

If you are interested in an Old World arboreal or bird spider, you might want to consider the Gooty Sapphire tarantula which comes from central-southern India. They have a beautiful blue color, unique looks, and stunning patterns. It is mildly aggressive but will let itself be handled on a good day.

Most tarantula hobbyists consider the Rear-Horned Baboon tarantula to be one classic Old World tarantula to own. They come at a very reasonable price and can be a lot of fun because while they hide in their burrow most of the time, they produce a lot of webbing and are very fast at catching their prey. However, they still are Old World which means they do tend to be more defensive and speedy.

The Orange Baboon tarantula is also known as the “Orange Bitey Thing” because of its fierce character and reputation for aggressiveness. This spider is a beautiful-looking orange tarantula that should not be handled at all. If they do feel the need to get defensive, their bite is very painful. However, its behavior makes it an interesting spider to keep.