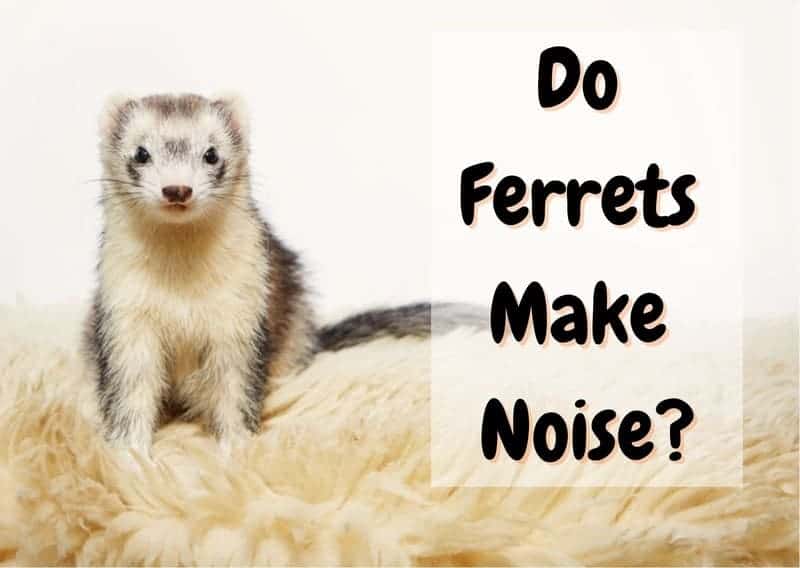 When you get a ferret for the first time, a common consideration is what the sounds they make mean and also how loud the pet is going to be. Ferrets definitely do make a good bit of noise when expressing themselves; however, they sleep quite a lot too (including through the night), so their noise is generally pretty manageable at night.

Let’s take a closer look at all the noises ferrets make on a regular basis. We will also have a look at some of the ferrets’ daily habits in terms of noise levels for you to decide if this lovely critter is one you would like around you as a pet if you are thinking of getting one for your family.

Ferrets are known to make a wide variety of different noises ranging from hissing to barking to screeching. Some ferret noises can be rather quiet, but then some sounds like a screech can be a lot louder. In comparison to an animal like a dog, ferrets are definitely quieter.

On the other hand, in comparison to a cat or a hamster, ferret sounds are definitely louder. The good thing about ferrets, though, is that they sleep a lot (up to 18 hours a day), so you will not hear ferret noises all day and night.

Are Ferrets Supposed To Make Noise?

If you are a new ferret owner, you might feel concerned about all the noises that your ferret is making. The good news is, it is completely normal for ferrets to make a whole host of different sounds. As long as it is not a sound of fear or anger (see the list below), it is nothing to be concerned about. If it is a sound of anger, just separate your ferret and give him some time on his own to regroup.

Ferret Sounds And What They Mean

Dooking is essentially just a ferret laugh and actually sounds like a laugh too. Whenever your ferret starts dooking, it means that your ferret is feeling energized and ready for some playtime. In fact, many ferrets make this noise while they are jumping around or running.

When ferrets squeak they almost sound like they are giggling, and it is usually a positive sound. An occasional squeak when they are excited means they are happy to see another ferret or a person that they care about (like you, for example.) However, if the squeaks increase in intensity or frequency, it could mean that your ferret is feeling overwhelmed and needs a few moments alone to regroup.

A hissing ferret sounds kind of like your ferret is trying not to laugh, but it is definitely not a sound of amusement. Ferrets hiss when they are feeling one of two emotions, anger or fear, though they do occasionally release a hissing sound during play fights with other ferrets. If your ferret’s body language appears like he is having a good time while playing, there is no reason to be concerned. But if your ferret is hissing at you or another animal out of fear or anger, it is best to make sure he can have a few minutes by himself.

Whining is very similar to whimpering, but it is generally the sign of something more serious. Most of the time, ferrets whine when they are sick or in pain. Baby ferrets are also known to whine to get attention from their mothers. You can tell the difference between whimpering and whining based on frequency and intensity. Whining tends to be more continuous and intense than whimpering.

Just like the name would imply, a screech is never a good sound when coming from a ferret. It is essentially a ferret scream, and it usually means that they are either in pain, in danger, or very scared about something that is happening to them or near them. If your ferret ever screeches, you should immediately check to make sure that he is okay.

Just like dogs, ferrets are known to bark; only their bark is more of a loud chirp. Ferrets usually bark when they are really excited, sometimes it is a happy sound, but if your ferret is continually barking, it can also mean that he is feeling upset or stressed about something. Spending more time with your ferret will help you start to distinguish his different barks.

A sneeze is not an abnormal sound for most animals, but ferrets do seem to have a particularly unique sneeze. Oftentimes, sneezing ferrets will do so a dozen times or so in a row. This is due to a runny nose and it’s not usually a sound to be concerned about unless it is paired with other sick symptoms, like a respiratory infection.

Lots of different animals snore when they are asleep, and many ferrets snore as well. This is a completely normal sound, so you do not have to be alarmed at all, but it can be very entertaining, especially if your ferret is dreaming.

Teeth grinding can be completely normal, but it can also be very concerning. It is very common for ferrets to grind their teeth during and right after meals in order to get food out of their teeth. However, if ferrets are grinding their teeth at other times, it often is a sign of pain, and you should likely take your ferret to the vet.

We have included coughing on the ferret sounds in this article because the sound can be a sign of some pretty major problems. They are known to get respiratory infections, and ferret coughing is often indicative of that. Coughing can also be a sign of an allergy or even heart disease.

What Sounds Does A Happy Ferret Make?

Nothing makes ferret owners happier than when their baby ferret warms up to their new environment and starts regularly making a happy sound. There are three main happy ferret noises that they make when they are in a good mood: dooking, squeaking, and barking.

Are Ferrets Noisy At Night?

A common concern that people have when bringing home a new pet is that their sleep schedules will not match up, their new pet will be noisy, and they will end up missing out on a lot of sleep.

The good news is, ferrets are not generally noisy at night. When you are asleep, your ferret likely will be snoozing away too. They are actually crepuscular animals, which means they are most awake at dawn and dusk, not nocturnal. They generally let their owners sleep at night and start being active when their owners get active in the morning.

Do Ferrets Make Noise In Their Sleep?

While we have already established that ferrets are not particularly noisy at night because they are sleeping, you may still be concerned about the noises that your ferret might make while he is asleep. The most common noise that ferrets make in their sleep is snoring.

Generally, a ferret’s snore is not all that loud, but if it does bother you, you may want to have your ferret sleep somewhere other than your bedroom.

Like all animals, ferrets dream in their sleep, and some ferrets will make noises while they dream, which can be extremely entertaining to watch and listen to. However, if your ferret dreams all the time, you may also want to move your ferret into another room to sleep.

What Is It Like To Live With A Ferret?

You may also be wondering what it is like to live with a ferret beyond just the noise. Well, ferrets are generally very energetic animals when they are awake. Because of this, they like to run around and jump from thing to thing exploring, and they are also known to get into quite a bit of trouble. For this reason, you might want to consider ferret-proofing your house or whatever room you will keep your ferret in to make sure he does not get into every nook and cranny of your house.

It is always best if you can play with your ferret a good bit every day – or get multiple ferrets so they can play with each other – to help get some of that energy out.

In contrast to their abundance of energy, ferrets actually do sleep a lot every day. Most adult ferrets will sleep anywhere from 14 to 18 hours every single day, and both younger ferrets and elderly ferrets are prone to sleep even more than that. However, that is not usually all at once. Ferrets tend to sleep for several hours, wake up for about an hour to play, eat, drink, etc., then fall asleep again for a few hours.