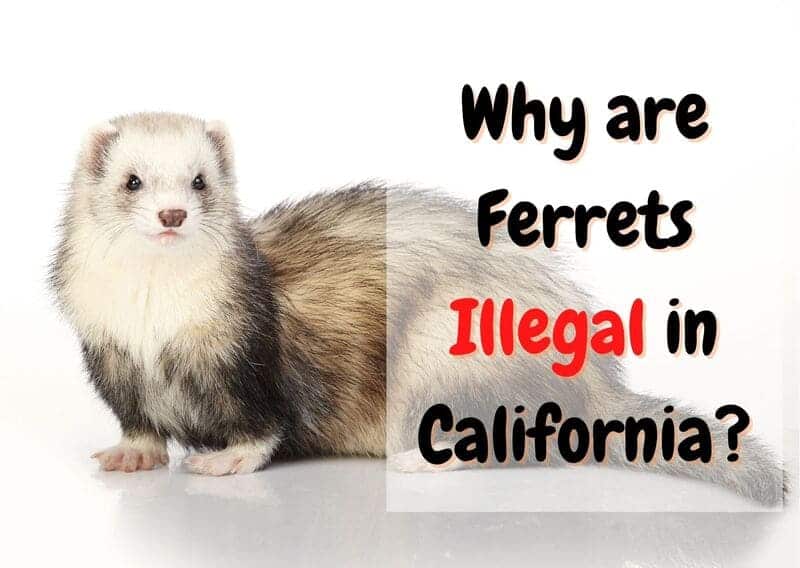 Ferrets have gained huge popularity as pets in the US for the past few years, however, they are illegal in some states, including California.

So why are ferrets illegal in California? The concern is that owners may release ferrets into the wild or the pets may escape and then establish colonies in the wild. The sudden growth of a feral non-native colony could jeopardize crops and other animals.

Here is a comprehensive answer as to why California bans domestic ferrets and other exotic animals while other states allow them.

Why Are Ferrets Illegal in California?

The main reason why ferrets are illegal in California is to Protect Agriculture and Wildlife.

The California Natural Resources Agency, which includes the Department of Fish and Wildlife, bans a variety of exotic pets, one of them being ferrets. The bans include various non-native species that the state considers a threat.

Basically, the laws protect the following:

In addition, California also prohibits the possession of animals considered endangered or protected in other regions. For example, sugar gliders are a protected species in Australia and are banned in California.

Moreover, the state has banned thousands of species, including gerbils, prairie dogs, monkeys, hedgehogs, and parakeets.

While California bans domestic ferrets, other states don’t have the same restrictions. California’s climate is part of the reason for the bans on some animals that other states allow.

California offers an environment where species like ferrets may thrive in the wild. This increases the threat to native species and crops.

Besides, in the United States, each state is a sovereign entity and may enact its own laws, if the laws don’t violate the Federal Constitution or the rights guaranteed in the Bill of Rights. The geography, natural resources, location, and demographics of each state result in a variety of different laws throughout the country.

What Ferret Bans Are Enforced In Other American States?

California isn’t alone in banning domestic ferrets. They are also illegal or restricted in other states.

States where pet ferrets are illegal to own

States where ferrets are under restrictions

Below is a list of states where keeping a ferret as a pet is not illegal but under some kind of restrictions. Some of these restrictions may include:

Therefore If you are thinking of buying a ferret, it is advisable that you contact your local vet, Wildlife Department, or Fish and Game department if you live in one of the following states:

Besides Ferrets, What Other Pets Are Illegal In California?

California’s ban on certain pets includes thousands of species, including many species allowed in other states. Besides ferrets, here are some of the most famous examples of this far-reaching ban:

California bans entire classes and orders of species. Besides the ferret, you cannot own any species of the order Marsupialia (marsupials and pouched animals).

Similarly, California bans all rodents, except domesticated golden hamsters and some domesticated species of rats, mice, and guinea pigs. If you want to own any slugs, snails, or clams, except for land snails, you’re also out of luck.

Some groups are trying to get the state to allow certain exotic animals as pets. You can find online petitions to legalize ferrets, sugar gliders, and hedgehogs.

Ban On Exotic Pets Across The USA

Besides ferrets, quite a few pets are banned across the country. For example, hedgehogs are cute little nocturnal animals that many states ban. That is why you can’t own one as a pet in Maine, Hawaii, Arizona, Georgia, New York City, or California.

Likewise, most states don’t allow residents to own monkeys and other primates, but there are exceptions. You can own a monkey without a special permit in Georgia, Kansas, Oklahoma, North Carolina, and South Carolina.

Sometimes states ban species for their threat to the local ecosystem. The Quaker parakeet is an example. Besides California, nine other states ban this little bird, as it may fly off and create its own flock, disrupting the local wildlife.

And for obvious reasons, almost half the states in the US have laws that prohibit residents from owning certain species of venomous reptiles.

There’s also one formerly popular pet that you can no longer own in any US state. Since 1975, you cannot sell or own turtles with shells measuring less than four inches. The US banned small turtles due to the spread of salmonella.

On the other hand, some states have almost no restrictions on exotic pets. In Alabama, Wisconsin, Nevada, North Carolina, and South Carolina, residents can own almost anything, including bears, tigers, and lions.

And surprisingly, California allows some species that other states prohibit. In California, you can own almost any variety of hybrid cats. Unfortunately, they’re illegal in nine other US states and several cities.

What Happens If You Own a Ferret or Another Illegal Pet?

The California Department of Fish and Wildlife doesn’t have the resources or staff to strictly enforce its ferret bans. However, if someone notifies the department about your ferret, someone could come and take it away. Besides confiscation, you face the following penalties for possessing a ferret:

Criminal prosecution is extremely rare. However, fines and confiscation are expensive. In some cases, you also need to pay for the rehabilitation of the ferret so the state can release it or send it to a different facility.

Despite the ban, there is potentially a way to own some of these pets. The Department of Fish and Wildlife can issue a permit for certain species on a case-by-case basis. Unfortunately, they don’t issue permits for ferrets.

The permits are primarily for wild animal handlers, research facilities, trainers, and shelters. The state may also grant special permits to zoos and aquariums to breed restricted species.

So, unless you intend to use the ferret for research, teaching, or exhibition, the permit doesn’t apply to you.

California bans ferrets and many other pets, but still allows a few. So if you want something other than a dog or cat, the following options are still okay in the state:

You can’t own many of these species in other states, yet California allows these animals as pets. Some of the most surprising entries include the miniature farm animals. You can own pygmy goats and miniature horses.

Wolfdogs are another example of an exotic pet that is prohibited in many states and allowed in California. Wolfdogs are hybrid dogs with wolf ancestry. In California, you can own a wolfdog rated F3 or less. The “F” stands for filial and traces the lineage of the pet. An F3 wolfdog has at least one grandparent that was a wolf.

You can also own most species of flightless birds. For example, you can keep an emu or an ostrich in your backyard. In fact, most species of birds are legal in California, except the Quaker parrot (monk parakeet or Quaker parakeet).

You can also own mynah birds and even toucans. You just can’t own most birds of prey without a license. These restricted birds include falcons, eagles, and hawks.

However, keep in mind that many of the permitted animals require a lot of maintenance. You need adequate space and may even need to build an outdoor shed or barn to house the animals.

Why are sugar gliders also illegal in California?

The state of California worries that sugar gliders will escape, establish their own colonies, and disrupt local wildlife, crops, or natural resources. This is the same reason that California bans many species of colony animals, including most rodents.

Veterinarians can treat any animal and don’t need to report it to the authorities. And regulations state that no vet has a duty to advise law enforcement about the pet unless the animal bites a person.

Why can you still buy products for ferrets in California?

Many stores sell sugar ferret products because they may offer uses for other pets. People with the necessary permits also need to obtain pet supplies. Additionally, some pet stores are part of nationwide chains that carry most of the same inventory across their various locations.