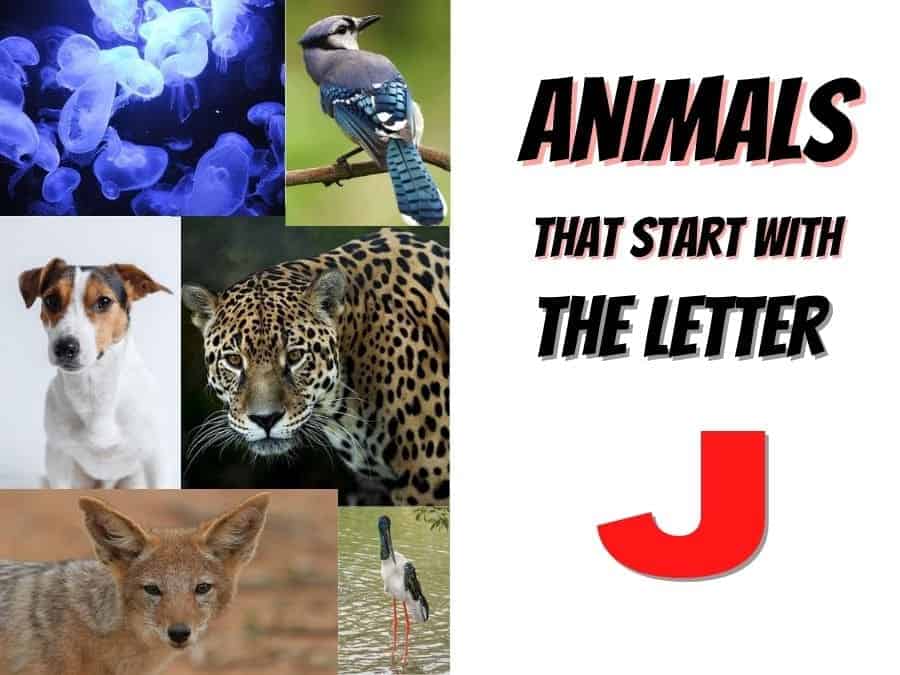 What animals start with the letter J? We are listing them here for you, from the speedy Jack Rabbit to the clever Jackal, right through to the Jellyfish and the Jay.

Without further ado, let’s get a look at the animals beginning with a J.

Animals That Start With The Letter J – The Complete List

Jabiru is the tallest flying bird in South America. The Jaribu is a powerful and gracious flier who eats reptiles and mammals.

Jacamar is a tropical bird that has a glittering body and scoops down, with wings like a butterfly or dragonfly, to catch its prey.

Jacana is a tropical wader bird with elongated toes and toenails that help it stay afloat and lives in South America.

The Jack Rabbit is a hare that can run up to 40 mph. The hare’s babies are called eurets.

The Jack Russell is a type of dog, a terrier named after John Russell. This dog is bred to hunt and flush out the fox but never to kill its prey.

The Jackal is a territorial animal that is very vocal with a high-pitched sound. These animals are monogamous, which means they mate for life.

The Jackdaw is an animal that molts every year during a specific season and is attracted to shiny trinkets. Also been known as a thief in stories.

Jackson chameleons hydrate by drinking the due off of leaves. They have three horns that they often like to fight with and have eyes that remind you of binoculars.

This bird is also a symbol of freedom. It breeds in North America, North Europe, and Asia.

Belongs to the cat kingdom and has the strongest bite of them all. They love water. They are often represented in myths and legends.

These cats jump 6.5 ft to catch their prey. They have spotted fur and in Belize are called the Halari.

These beetles are not native to the United States. They love staying in the sun and avoid certain plants and they have a long lifespan.

Japanese Chins are animals of royalty. Matthew Perry brought the first from China to the United States.

These short hares got their name from ancient Greek. They change colors to adapt to different seasons.

Japanese macaques are good swimmers. They sleep on the tops of trees in the winter to avoid the snow. They like to play with stones, fight and swing in trees.

A mole that lives anywhere from the eastern parts of Asia to Japan. They can live up to 3.5 years in the wild.

Japanese rat snakes are known to steal baby birds from their nest. Their Japanese name means audacity. Some albino kinds of this snake can be found in Kunashir island and they are said to be good luck.

The Japanese Spitz is only 12-15 inches tall. This dog lives 10-16 years and loves to play flyball and Frisbee.

This squirrel has some funny eating habits. They hang upside down as they chew their food. They have a camouflage color that helps them remain unspotted. Their babies are born with closed eyes and no fur.

The Japanese Terrier is native to Japan and they descend from the progeny of a fox-like Terrier and a Japanese dog.

Javan Langurs are picky eaters and love fresh leaves. Orange Langurs are rare and are mostly found in zoos. The black ones are found in the wild. Langur in Hindi means long tail.

These pigs are endemic to the islands of Jave. They have long tails and slender legs. They originate from Asia and are good swimmers and runners.

A type of bird that lives in South East of Asia and favors human-like habitats. They have an 18 cm wingspan and fly approximately 7 meters per second.

There are only 67 Javan rhinos left in the world. They weigh 2.3 tons and are herbivores. They are solitary animals and have a life span of 30-45 years.

These bats can be found on the Kangean islands of Indonesia and Nusa Penida Java. They are small to medium size and have broad wings and large ears with long fine fur.

These animals were first known and described by Thomas Horsfield in 1822. They are endemic to the Indonesian islands of Sumatra, Bali, and Java.

A siamese-style cat with a coat of many colors. They have a muscular build, are athletic, and like to jump and climb most of the time.

This is a colorful crow whose specific name is Garrulus Glandsrius. They can eat up to 5,000 nuts in a season.

Some of these fish glow in the dark. They are the oldest multi-organ animal. Not all jellyfish have tentacles. Over 150 Millon people get stung by jellyfish each year.

There are 33 species of Jeroba. They get around by jumping and can leap up to 3 meters and hop up to 24 kph. These animals are nocturnal and don’t drink water at all.

A rodent species found only in Mexico. They are in the Cricetidae family. Their habitat is tropical and subtropical. They live in mostly lowland forest areas.

Another name for this fish is Peter fish. This is an edible marine fish that is mild and sweet in flavor. They have an olive, yellow body with a large black spot and long spines on their dorsal fin. Their lifespan is around 12 years.

Jonah Crabs have a hard exoskeleton and they grow 4-5 inches wide with some even up to 8 inches.

This is a venomous spider also called the Japanese spider demon. The web females spawn can reach several meters in length.

Juncos are also called snowbirds. These animals are endangered and there are many variations. They have a long lifespan and they do not have to migrate south for the winter.

This feline is fast and can run at up to 20 mph. They feed on domestic prey. They have sandy brown fur and were tamed by Egyptians.

The Jungle Palm Squirrel is part of the rodent family and is endemic to India. They live in subtropical or tropical environments and are tolerant of habitat changes.

These mammals are found in North America and are the second smallest in the world. In the winter they lose up to 40% of their body weight.

They are closely linked to domestic chickens found in Hawaii. They make distinct sounds to scare predators.

These mice are nocturnal animals that live mostly in the grassland or shrubs. They eat insects and can communicate over long distances.

Jungle red squirrels have two toes and four fingers. They can find food beneath more than 1 foot of snow. Believed to have reached the British Isles through Europe more than 10,000 years ago when the first Ice age came to an end.

A species of rodents found in Afghanistan, China, and Pakistan. They cause damage to fruit trees, gardens, and plants and are found in hayfields, pastures, and ditches in the Rocky mountains.

link to 18 Animals That Start With Z