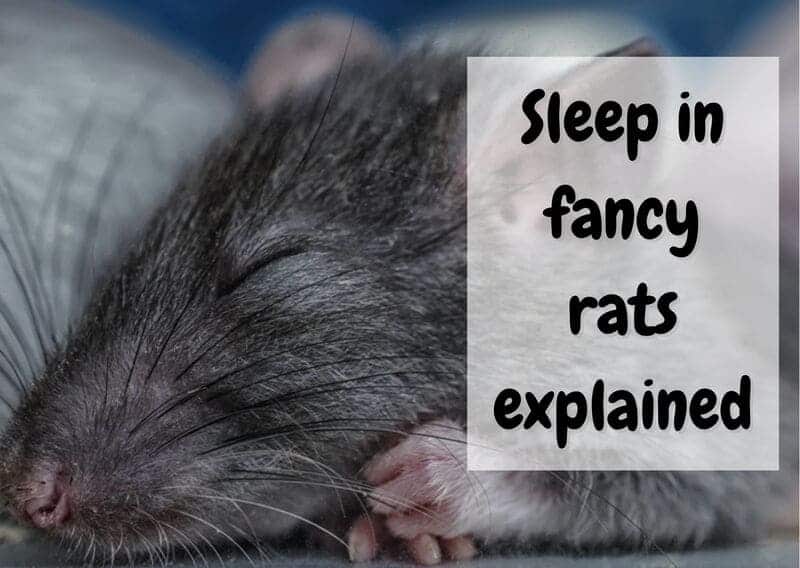 All fancy rats will be active after dark, but that won’t be the only time they are awake. They have an interesting sleep cycle that will make them more active at certain times of the day.

Are Rats Nocturnal Or Diurnal?

Rats are considered nocturnal by nature, but they can also show signs of being crepuscular, which means they can be awake at dusk and dawn. However, an interesting fact about fancy rats is that they will adjust their sleep schedule somewhat to your presence but will also have short naps whenever they can, all due to their built-in nocturnal nature.

What is a normal rat sleep schedule?

Your rat will sleep as much as 14-15 hours during the day and will be most active at night, but it will also take plenty of naps at night if they are especially active. This can happen when they are younger and are playing with others. These naps are often just a few minutes at a time and are not really considered deep sleep. During the day, rats can also wake up because of noise or to get a quick snack or a drink of water.

Many owners will keep their rat in a pocket or in their hoodie during the day. This is after they have been tamed and are taken around with their owner outside of having a rat carrier cage. Depending on how tired your rat might be, they will prefer to sleep in their cage since this is a comfort for them.

Some practical steps for your fancy rats to sleep well

How do I make my rat sleep?

You can only influence your rat but you cannot get them to sleep if they are not tired. With plenty of exercise and a good diet, your rat will find many excuses to rest whenever they want. Obviously, exercise will play a large part in getting them to use up their energy. This can happen from playing in their cage or from handling them in person. Either way, with enough exercise that comes naturally to fancy rats, they will get tired.

Where to place your cage so that your rats sleep well

Your rat does need some degree of quiet while they sleep during the day. Limit the loudness of music playing and make sure that you don’t have other pets in the same room where your rat is sleeping since barking or other noises will keep them awake.

Should I cover my rat cage?

You can cover your rat cage if your home is very cold and you want to conserve heat. This will help keep your rat cozy until you can put the heat back on. You may also do this to signal to them that the time has come for them to have a quieter time. It seems to help, especially for shy or territorial rats.

Careful though, your rat will want to chew on the fleece and might pull the sheet right through the cage bar. What you can do is put a bigger tray on top of the cage and overlay the blanket on top of it so that it hangs away from the cage.

A good rat cage setup should include hammocks that can hang from the roof of your cage. This also gives them a space for crawling and frees up floor space for them to wander and play. Hammocks are often made from fleece but can also be made of woven hay or straw.

Another popular choice is a house that allows your fancy rat to hide inside. It will also be a place where your rat will build a rat nest, so they will pull all sorts of fluffy items inside for cushioning. We recommend giving them the lint that is from your clothes dryer, they’ll love stuffing this into their nest.

Rats like places that they can crawl into, so it’s no surprise they will like sleeping in a hut. This hut can be made from wood or fabric, yet plastics aren’t advised if they are the type that can be chewed.

Any kind of fleece sock is good because they crawl inside and make this space a private getaway. Because they can often pee in this sock, you’ll need to clean it every week so it doesn’t start to smell.

5. Under a fleece blanket

Rats love blankets and will drag them everywhere and turn them into a good sleeping area. Fleece is also a great soft material that is less likely to be harmful if your rat likes to chew on it.

What position do rats normally sleep in?

Rats are real acrobats when it comes to sleeping positions. You’ll be amazed by some of their crazy sleeping styles, so here’s what you can expect.

Rats won’t care too much whether the room is light or dark since they build nests to sleep inside, although most rat owners have reported that a darker room has a calming effect on their rats.

You can choose to draw the drapes if the room is too bright, and if their cage is in a room where there is light shining onto their cage, it would make sense to close the blinds on a window. You can also choose to dim the lights if you have a dimmer installed, otherwise, the lights don’t need to be on if you aren’t using that room. Rats are smart and they will find a place that is nice and dim if it’s too bright for them.

Can you change a rat’s sleep pattern?

Rats will adjust to your schedule to some degree. They’ll always sleep in the daytime with certain waking points where they’ll sluggishly move around. They can also wake up as early as sunset if you’ve trained them to wake up a bit earlier. Keep in mind that seasons, the use of daylight savings time, and clock adjustments will have an influence on your rat.

Since you will see that there is an hour difference when the sun appears to go down, you will likely see your interaction with your rat change too. They will adjust their sleeping habits to wake up if you are expecting them to wake up earlier. But as the season changes, they will find the time to sleep by adjusting to different sleep patterns.

Why is my rat sleeping all the time?

14 to 15 hours of sleep is actually natural for them. If they are sleeping more than 15 hours a day, this could be a sign of sickness or depression. As rats grow older, they will sleep for longer periods to conserve their energy.

Fancy rats will go through their own sleep adjustments as they grow up. It is not common for young rats to sleep a lot but brand-new rats might be sleeping more because they are stressed from being transported to their new habitat. They can also do this if you make big changes in their habitat. Adding stuff to their cage will make them curious, but they can react poorly if you take something away from their cage.

What are some good rat sleep accessories?

Rats like to have soft materials that they can use to create their rat nest. Soft fiber is a good idea since you can always use fleece that is not going to be hazardous to your rat. If your rat does try to chew on these materials, it won’t be nearly as bad as giving them anything that has sewn thread or fabrics. Obviously, you can get a lot of ideas from looking at social media sites that are showing off rat owners and their cages.