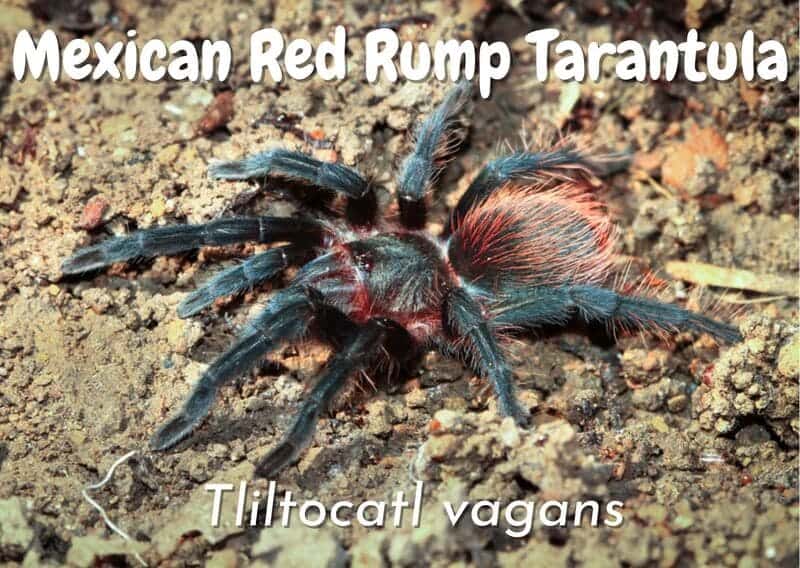 Talk about an impressive spider that has a great back story in addition to a brightly colored rump! This globetrotter has been renamed and rediscovered in many places over the last century and is now commonly found in a pet store near you. This attractive fuzzball specimen is a great starter spider that is easy-going and universally eye-catching.

Tliltocatl vagans – this species was originally discovered by Anton Ausserer (1875) but was later reclassified as (Eurypelma vagans) in the same year. It was later renamed as Eurypelma duponti by another scientist named Becker in 1879.

The weirdest part of this story is the recent rediscovery in 1996 almost by accident, as it was found living in a citrus grove in St. Lucie County in Florida by grove workers. It was brought to a tarantula expert who identified it initially as Brachypelma vagans, but can also be identified as Tliltocatl vagans. There are 7 other species in the Tliltocatl vagans family.

Characteristics of the Tliltocatl vagans

This spider has a deep black-velvet-lined body with bright red urticating hair covering its abdomen. All around the edges of the carapace, connecting exoskeleton tissue is also colored red with a bright half-ring red coloration above the front pedipalps. As slings, they will primarily be brownish little crawlers that look like your average garden spider.

You can get juveniles from a dealer or pet shop reaching at least 2 inches in length. They will reach a full body length of 3 inches with a diagonal leg span of 6.5 inches. Males will be spindlier and thinner looking while the females are more impressive with a thicker and plumper look.

In general, they are pretty active terrestrial spiders that like to spend most of their day out and about. This is what makes them excellent show spiders since they like moving around so much. They will hide from time to time, but this is to chill out or retreat to a safe place.

This species also can live to be 25 for females that are kept happy and have a habitat that is perfect for them to live in. Males don’t stand up to the test of time as long with an average of 5 years at most. This is often from mating attacks that can result from a female who is a quick responder. They can also die from old age, so 5 years is generally the expiration date you can expect.

Your Mexican Red Rump can be spooked easily and will turn defensive. Handle at your own risk. They’re also prone to mood swings and can be territorial if you put your hand in their habitat.

If you need to change their water they can also raise their front legs in protest, so it’s best to distract them with a tasty snack. They’re good for being a beginner spider with some tarantula experience.

Of course, a Mexican Red Rump bite is going to be painful but not poisonous to humans at all. The worst you’ll experience is nagging pain for a day, followed by swelling, and a bite that needs to be treated with alcohol and hydrogen peroxide.

If you do get bit, you need to be careful to not drop your spider if you’re holding them. Most spiders will die if they fall from 1-meter or higher hitting a hard surface.

This is an easy spider to keep since you don’t need to have a habitat that is kept moist all the time. Handling the Mexican Red Rump is quite easy too, which makes for a good beginner spider.

Slings can be kept in throw-away plastic containers like the ones you get at the Chinese takeaway. Use a hot needle to create air holes in the top lid. Juveniles can live in a small 1-gallon tank and an adult needs a 5-gallon tank that is largely vertical.

As a rule, always have clean water in their habitat, since you are not adding any water to their substrate at all. This needs to be refilled every 1-2 days. There’s also the task of removing bolus that’s discarded after they eat. The best advice for changing their substrate should happen at least 1-2 months.

You will want to have a good sticker thermometer that tells you what the temperature is inside the tank. Slings only need substrate but juvenile and adult spiders will need tanks with hiding houses and other decorations. Nothing too fancy unless you want to have a lamp built into the top lid. Buy a tank that has a side or front door built-in to feed your spider easier.

The ideal humidity will be 60-80% due to a deep substrate that’s at least 6-inches deep. The first 4-inches of the substrate need to be moist but the top 2-inches need to be dry. As the lower layers start to evaporate this raises the humidity level to the level your spider will enjoy.

The optimal temperature you want to have in your tarantula habitat will be 75F to 80F degrees all year long. Heating pads under the tank are not recommended as they may lead to heat spots. In the winter you’ll need to adjust the heat so it remains constant.

This species doesn’t need a harsh light but something with a dimmer on it. The best will be using LED lights that can be adjusted during the day. It’s better if you put it on a timer so it can hunt at night in the dark. Never put incandescent lights close to your habitat since it will raise the inner temperature.

Using a substrate that is a good 50/50 mix of sterile soil and coconut fiber is all you need for this species. It doesn’t burrow very much but does need at least 8 inches deep (for adult spiders) so that the humidity levels can be achieved easier.

Always cook your soil and coconut fiber beforehand to kill off any parasites or eggs that can hatch. These can harm your spider leading to death in most cases.

How to feed the Mexican Red Rump tarantula

When it comes time for feeding, slings can eat small fruit flies that have had their wings removed, small headless nymph crickets, and newly born wax worms. All of the juveniles can have small crickets when they reach 2 inches in length.

By the time of growing into adulthood, your spider can enjoy crickets, locusts, mealworms, and roaches that can be given at random so they have a variety of food all the time.

How often to feed them

Slings up to juveniles should be fed twice a week until it’s time for them to molt. Don’t give them any food up until they slow down in their eating sprees. Give them a couple of days to harden after they molt so they don’t get hurt as their exoskeleton hardens properly.

Once your tarantula reaches adult years, it will eat 5-10 crickets every 7-10 days. The waiting period after they molt is one week before you can safely feed them again.

Since their habitat is going to be quite dry, you can give your spider a generous amount of water in a shallow dish. Find a cap that they can crawl over that is a peanut butter twist top.

For all smaller spiders, you can use a shallow twist top from a water bottle or Asprin cap so they don’t fall into the water and drown. These need to be topped off and leveled to the substrate.

Even though this spider is very docile in their habitat, it can be unpredictable at times with a dicey attitude so you should use caution if you decide to handle this spider. You also need to start when they are young but expect they will be quick-burst runners.

This spider doesn’t have health issues except for the effect of parasites that could be introduced into their habitat by accident. This is why you need to sterilize all the substrate using heat to kill eggs that might hatch inside the soil or within substrate fibers like coconut.

Even the sections of bark or branches you put inside their tank need to be baked out to kill anything potentially living inside these natural materials.

Once these spiders reach maturity, they will be ready to mate one month after they have their most recent molt. For males, this will take place after 4 years, and for all females after their 8th-year molt. This will be the best time to pair a male and a female together.

The most obvious will be the sperm sacks that the male will have on his pedipalps. He will drum for the female and wait for her to respond before he tries to mate with her. You’ll need to remove him after that or she will try to eat him.

How many eggs does a female Mexican Red Rump lay?

Once a female is impregnated by a male, she can produce 100-300 eggs in her egg sack. There have been reports that she can produce up to 500 in some rare cases, but the general number is much lower.

After mating it will take an additional 4 weeks before she produces her egg sack. During this time the substrate must have more moisture, and not be as dry as its habitat normally is.

There is little or no financial gain from selling slings and will best be sold in bulk to a pet store for the best offer you can get. If you do sell them online, they won’t fetch as much as other tarantulas will, since they are so common.

This species is so common that they are often given away as free spiderlings at spider shows as freebies when you buy a tarantula. They have earned themselves a meme of their own due to the frequency of being referenced as B. vagans’. If you do find them being sold in pet stores, they are often the least expensive of all of the tarantulas you’ll ever find.