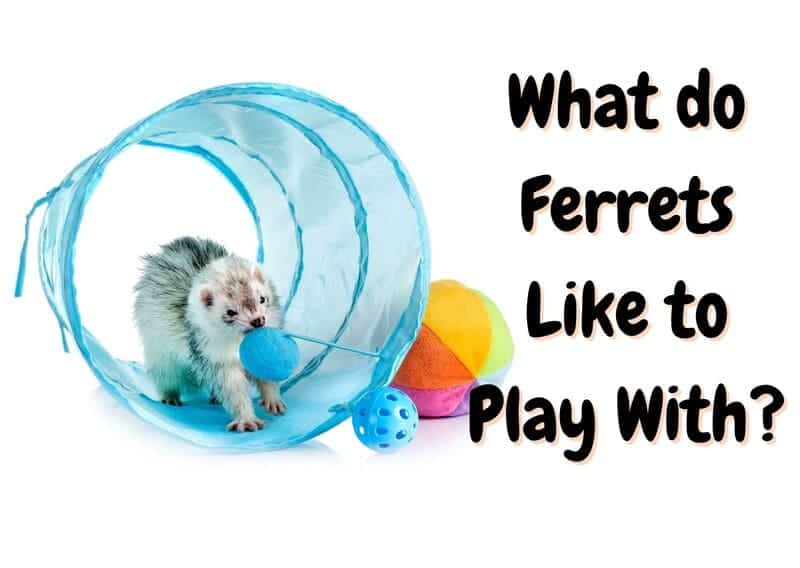 Ferrets are energy-filled little balls of fluff who love to play by themselves, with other ferrets, and also with you. Knowing how to play with them and with what toys can be a little confusing sometimes. After all, every type of pet is unique and every individual animal has its own personality.

What toys exactly do they like to play with and what toys are best avoided? How do you play with your ferret to ensure his safety and yours? This article gets into all of that giving you everything you need to know to have the most fun and the safest playtime with your furry friend.

Like many animals, ferrets like to play with a variety of store-bought or D.I.Y toys. They can play with almost anything and are unlikely to become distressed when left to play alone.

When you are around though, ferrets enjoy playing as much as you do. They can still be very social animals and spending time playing with you is a big positive for them.

On the flip side of this, if you leave your ferret alone for too long he may become agitated and distressed. It’s normally best to socialize with your ferret several times throughout the day and schedule playtime at least twice a day – it can improve his happiness and well-being tremendously.

Here is a list of all the best, and safest, toys for your ferret that you can either buy online or at the pet store. There are also included some toys you can make yourself and some that you should stay away from.

There are so many great toys you can purchase online for your ferret. Most store-bought toys specifically made for ferrets are fine, of course, but it is best to make sure they are of good quality and are not going to break into sharp or small pieces.

Plastic balls are a great choice for ferrets, they can be thrown by you for him to chase or simply rolled around by your ferret himself. Ferrets are very smart and if you have a lot of balls, you may notice your ferret trying to pile them up together to reach something he otherwise couldn’t.

When picking your ferret’s balls it is usually good to choose either a ball designed for ferrets or one commonly designed for cats. Plastic can be fine, but when choosing plastics make sure that it is safe for ferrets – if broken they can become a choking hazard.

A safer alternative can be wicker balls, your ferret will eventually pull them apart but they are incredibly cheap so burning through them often is not an issue.

Ferrets are predators in nature. So, like dogs, they enjoy tearing into a good squeaky toy. Getting teddies with a squeaker or even rubber squeaky dog toys can be great for your ferret.

When buying teddies make sure that they don’t swallow any of the stuffing or the squeaker when they inevitably get there. It’s actually better if you replace the toy before that point.

A big upside for you when getting these toys is that your ferret is less likely to tear the cushions in your living room. Ferrets aren’t typically destructive, but they can become so if you don’t give them some kind of toys they can use to unleash their predator instinct for a little while.

If you do end up buying your ferret some “teddy-like” toys and you have small children it’s probably a good idea to keep any area with your ferret free of your children’s stuffed animals so they don’t become his prey too. You might end up with a very unhappy kid if their favorite teddy bear becomes tattered and torn by your ferret.

Rattle toys are good for ferrets, they find the noise interesting and can be good mental stimulation for them. Rattles should always be sturdy and not likely to break.

If whatever is making the rattle noise should come out of the toy there is a good chance your ferret might investigate by eating it. Like all toys with potential choking hazards, keep a watchful eye.

Large ferret balls with holes are basically multi-entrance hamster balls for ferrets. Ferrets are goofy and love climbing into things. Most good tunnels and exploring toys for ferrets can be made by yourself; this type of ball is the exception.

There are even large hamster balls called ferret exercise balls that your ferret may enjoy. Some ferrets don’t like them, so don’t be disheartened if he isn’t interested.

This one is not exactly a toy but ferrets absolutely love hammocks. You may not be able to play with him too much using a hammock but he will certainly entertain himself.

It’s good to leave your ferret some toys in his cage for when he is alone to keep him entertained. He may end up using the hammock to sleep instead of his regular bed, in which case it is important to wash it around 3 times a week to avoid a bad smell around your house.

Hammocks can come in all shapes, styles, and sizes so it might be nice to buy him a variety. When hanging them it’s best not to hang them too high if he has a large cage as he can hurt himself falling out – ferrets aren’t always the best climbers.

Building toys yourself can help you save money and be fun at the same time. It allows you to get creative and put your heart into making something fun for your ferret to enjoy.

When creating D.I.Y toys you must follow the guidelines of what is OK or not for ferrets. In the next section, there are some specific details about what’s not so good for ferrets to play with.

This may be the easiest D.I.Y project anybody could undertake. Scrunched-up newspaper turned into balls can be great for your ferret.

The sound they make when he grabs them makes them a much more stimulating toy than most others. Just make sure he doesn’t eat the paper, though.

Ferrets are extremely flexible and love squeezing into tunnels. Creating some homemade ferret tunnels using PVC piping is incredibly easy, just buy the pipes and bends from a D.I.Y store.

You can assemble and re-assemble these pipes into any number of combinations of ferret tunnels. Make sure the tunnels are big enough for your ferret to fit through otherwise your ferret might get himself into trouble.

This project might not be cheap depending on what piping you choose but the cost range is really up to you, depending on how large you want your ferret’s tunnel network to be.

Cardboard boxes can fulfill the same role as PVC piping but are much cheaper. Creating some weird and wonderful cardboard structures for your ferret out of nothing but cardboard and tape can be a fun project for anyone, especially kids. Extra tip: fill your box with packing peanuts and enjoy the show.

What Shouldn’t Ferrets Play With?

Ferrets are okay to play with a lot of toys but to decide which toys aren’t so good for a ferret you need to keep in mind some key information about how ferrets behave.

Ferrets, like many predators, like to tear into their toys and destroy them over time. They are acting out the predator-prey dynamic and it’s good for their mental well-being to do this.

However, ferrets also tend to swallow after the “kill”. Ferrets love to chew and swallow things, so when buying toys for your ferrets stay away from ones that provide lots of choking hazards (small pieces, sharp pieces, etc). Cheap brittle plastics when broken and swallowed can make your ferret gravely ill.

Additionally, if a toy is going to become frayed and fall to pieces like a teddy bear, they shouldn’t be left alone with these toys. Even if the stuffing from a teddy isn’t going to choke your ferret it does him no favors being in his stomach.

How To Play With Your Ferret

When playing with your ferret, make sure he isn’t at risk of escaping, and that there are no ferret-sized escape routes out of the house that he might take advantage of. If you are outside he really must be wearing a leash at all times even in a fenced-in garden.

Even though ferrets do enjoy being handled and cuddled from time to time they much prefer being on their own four feet. They will like running as much as possible so even if you are not using any toys, playing chase can be one of his very favorite games. These games are best for children because:

Ferret bites are gentle and not meant to hurt but that might not always be clear to smaller children, so it may be best to limit this type of play. At the very least it should be supervised at all times.

Double Trouble – Are Two Ferrets Better Than One?

Ferrets are perfectly fine being on their own, so if one ferret is more than enough to manage for you, it is okay to just stick to having the one fur ball. If you do feel that you have the means to bring another ferret into your home, you will no doubt have two happy ferrets since they are very sociable after all.

Owning two ferrets could mean you need to make some changes to your current ferret’s living area. He may need a bigger enclosure, which you might want to buy first because when your new ferret arrives it’s best to keep them in cages next to each other, not the same one.