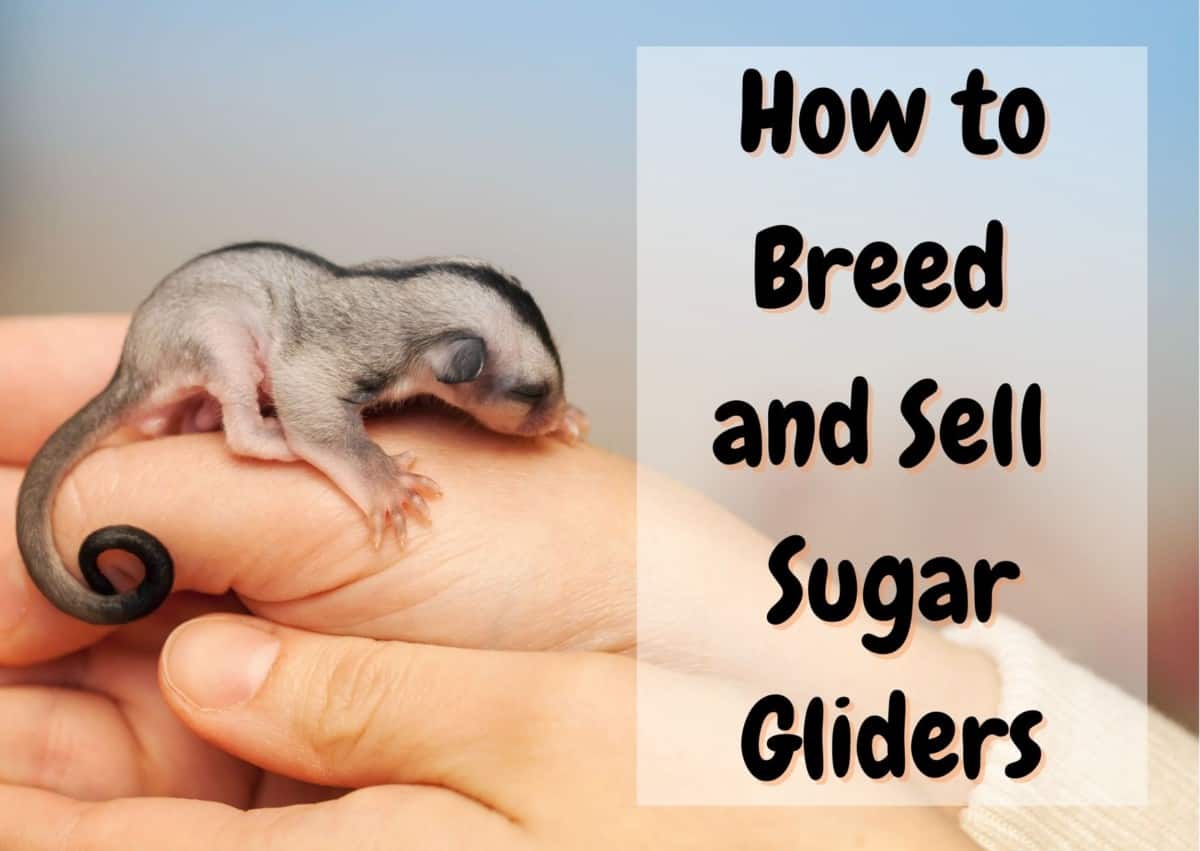 Female sugar gliders have a pouch

Female gliders use their pouches, called a marsupium, for protecting, raising, and carrying their young joeys. The pouch opening sits in the middle of the abdomen, about where you would normally find a belly button.

The vertical, half-inch opening becomes easier to see as the glider matures, but it’s still noticeable in young joeys. If you look at a sugar bear (baby sugar glider), you’ll either notice a small slit in the stomach or a small bump. The small bump is his scrotum, and it indicates that you have a male glider.

Sometimes, the scrotum is mistaken for the male penis. Unlike other mammals, the gliders don’t have separate openings for peeing, pooping, and reproducing. The male penis extends from the rectum and looks like a tiny pink worm.

Male gliders secrete oil from the glands to mark their scent on other members of the colony and their territory. The scent acts as a warning for other males they may come across.

Males tend to reach maturity at about 12 to 15 months while females mature in about 8 to 12 months. In the wild, they typically mate two or three times per year, producing four to six joeys annually.

The good thing about sugar glider breeding is that sugar gliders don’t have a complicated mating ritual. If you place a healthy, unneutered male and female in the same cage, they will eventually mate. The mating process is not mysterious either, with the male mounting the female from behind and repeatedly thrusting.

After successful mating, you may not notice any physical signs of pregnancy. However, the mother’s behavior may change a little. Female sugar gliders that are pregnant tend to become more restless and less sociable.

How Do You Make Sugar Gliders Mate in Captivity?

If the gliders are healthy and active, they should breed easily. Make sure that you continue to feed them a healthy, balanced diet. You should also ensure that the cage is clean.

Fortunately, mating two sugar gliders in captivity rarely require much work. First, make sure that you have a mature male and a female. You should also ensure that they are not related.

While gliders typically breed indiscriminately, you may occasionally find that a male and female don’t want to reproduce. In these situations, your best option is to try using a different glider.

Professional breeders keep multiple breeding pairs. Not only does this allow for a constant cycle of new joeys, but it also allows you to try different pairs until you get the gliders to mate.

If the gliders still refuse to mate, take them to the vet. An underlying medical issue may keep them from exhibiting normal behavior.

As mentioned, you’ll know that your gliders are mating when you see the act. However, you may also hear it. During mating, it’s common for males and females to make strange noises that sound as if two gliders are fighting. When you hear the fighting, you can expect to see new sugar glider babies in a little over two weeks.

Sugar Gliders Remain Pregnant for a Little Over Two Weeks

Sugar gliders have short gestation periods, lasting only 15 to 17 days. Each litter typically contains just one to two babies. While the female goes into heat every 29 days, she may only have two or three litters per year.

Toward the end of the gestation period, just before birth, the mother licks a trail of saliva from the uterus to the pouch. Your gliders shouldn’t need any assistance during birth, but to avoid freaking out, you should watch a video of a sugar glider giving birth. This one offers a close-up view of a sugar glider birthing process.

The tiny pink squirmy thing is a young joey traveling from the uterus to the pouch. The mother helps the process along with her tongue. Then, after reaching the pouch, the joeys remain inside for about 70 to 75 days. Inside the pouch, the babies find one of the four nipples. The nipples swell in the baby’s mouth where it remains stuck in place until the baby develops more.

Joeys are born hairless and blind. After about six weeks, the jaw muscles develop enough to unlatch from the nipple and suck without support. Around this time, the mother’s abdomen should look bigger.

Finally, about eight weeks after birth, you may start to see an occasional tail or leg pop out of the pouch. After ten weeks, the joeys start traveling out of the pouch for short meals, but they still get most of their nutrition from the mother’s milk.

You can pretty much leave the mother and joeys alone while the sugar glider babies remain in the pouch. After they leave the pouch, they have light fur, and their eyes stay closed.

Usually, about ten days after leaving the pouch, the eyes open. The young joeys continue to suckle on the mother’s nipples until they reach about five months of age.

In some cases, the mother rejects the joeys, usually due to a milk supply problem. In these cases, you will need to hand-feed the joeys using a milk replacer and syringe.

The first day that a sugar glider climbs out of the pouch (OOP) for a meal is its birthday. Two to four weeks after OOP, fur should cover most of its body. After five weeks, its ears may perk up. At six weeks OOP, you can start weaning them off milk with a combination of Gatorade, fruits, vegetables, and pellets.

How long does it take to wean the joeys?

It typically takes six to eight weeks to wean sugar glider babies, but owners rarely separate the babies from their parents before the tenth week.

When the baby is eating solid food on its own, it’s time to separate them. If you plan to keep them instead of selling and want them to live in the same cage, neuter the males anytime after the tenth week but before they become sexually mature.

Handle the young joeys frequently, but gently. Frequent handling prepares them for human contact, which is useful if you intend to sell them. Caring for young joeys isn’t much different from caring for your other gliders. You just need to be a little more cautious when handling.

Final Stage: Get Ready to Sell Your Joeys

Before 2007, you needed a license from the United States Department of Agriculture (USDA) to breed and sell sugar gliders. Now, anyone can breed and sell these animals. You just need to make sure that it’s legal in your state and city. Currently, sugar gliders remain illegal in the following areas:

In Pennsylvania and Massachusetts, you need a special permit to own, breed, or sell sugar gliders.

If breeding and selling are legal in your state, you can start marketing your gliders to the public. You can start looking for buyers by discussing your breeding business on sugar glider forums and online communities.

At first, you may struggle to find buyers, as there are many sugar glider breeders and not a huge demand for these exotic pets. As you establish a reputation for breeding healthy joeys, customers may come more easily. If you get serious with your breeding business, consider setting up a website. A website provides 24/7 advertising and provides a central spot for people to find your contact information and details about your joeys.

Can you breed sibling sugar gliders?

No, you should never breed gliders that come from the same lineage. In captivity, related sugar gliders will mate if left together. This increases the risk of deformities and health complications.

Do sugar gliders mate for life?

How many babies can a sugar glider have in a lifetime?

Sugar gliders reach sexual maturity at about one year of age. They can have two to three litters per year, producing one or two sugar bears. If a female reproduces consistently for at least a decade, she may have between 20 and 60 babies.