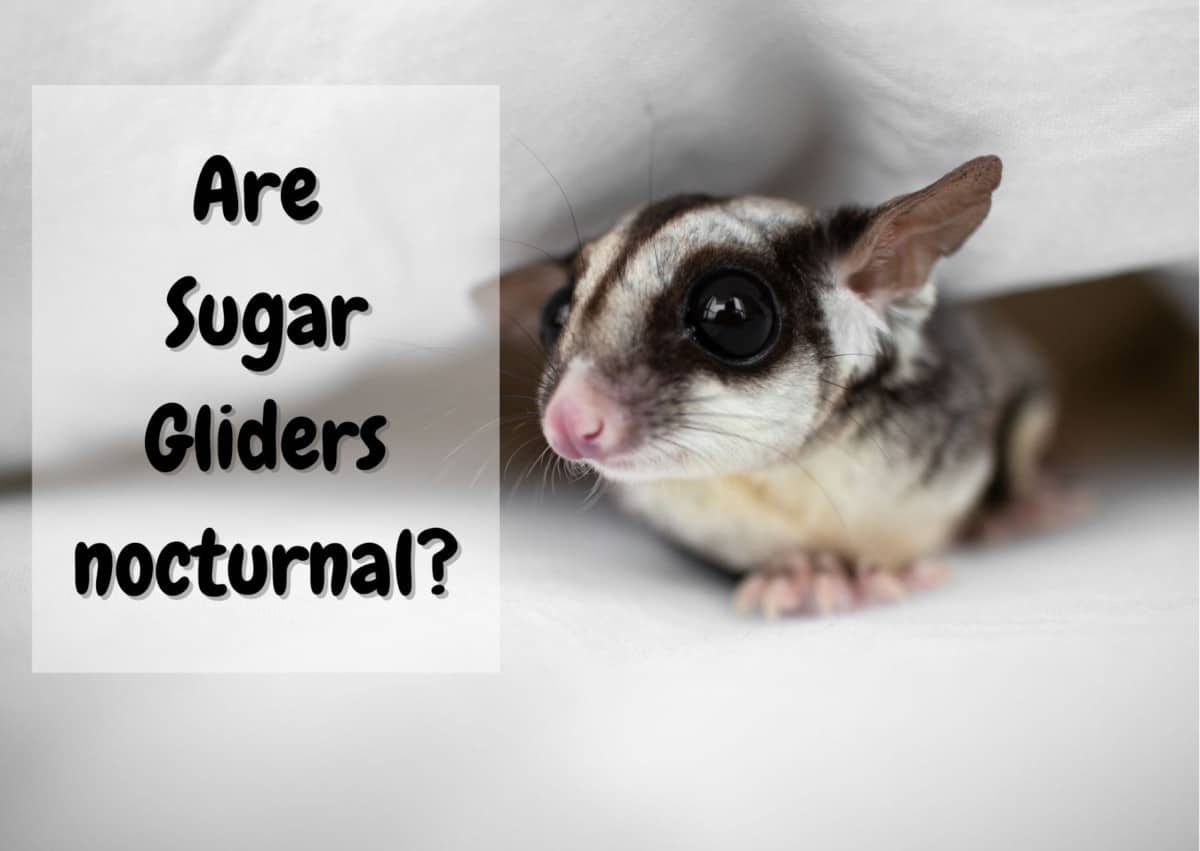 Are sugar gliders nocturnal? Yes, sugar gliders are nocturnal by nature as they sleep during the day while they are mainly awake at night to eat and escape from predators. Sleeping all day long will be a common sight for sugar gliders kept as pets.

This can be appealing for some owners who work during the day and have time to care for gliders at night. Yet some issues can go with pets that remain awake until the morning hours. Here are helpful facts and tips that can make owning a sugar glider manageable for your schedule.

What is a Normal Sugar Glider Sleeping Pattern?

In general, sugar gliders like to sleep all day long. This is 12 hours from sun-up to sundown or according to the season that defines sunrise and sunset times.

Even if you have sugar gliders that are born in the opposite hemisphere from Australia, they will always sleep during the day. It’s just their nature and they can’t help doing that for obvious reasons. When the time the sun comes up and goes down changes according to the season, they will adjust to these changes as well.

So what you will always see with your sugar glider is a natural alarm clock you need to work around. Take note of when they wake up every day and also if you can catch them falling asleep in the early morning. They will need approximately 12 hours of sleep during the day, so make sure they have proper bedding.

Their little bed is often a little sleep capsule made from a sock or duvet fabric. They will no doubt fill this with wool, newspaper, and even dryer lint.

Put a light near their cage that’s on a timer so they can’t see the outside light change at all. If you do this for a while, they can be encouraged to wake up earlier and go to sleep earlier. This takes time and I recommend getting a good lamp timer for this.

How noisy are sugar gliders at night?

Since the night is the time when sugar gliders are most active, they can get noisy in many ways. They may start making barking noises or even crabbing which are two sounds you will need to get used to. The barking noise sounds like a little puppy which isn’t so bad, but the crabbing can be off-putting at first.

This rasping or scratching sound is high pitch and is a sign they are scared or feel threatened. You will hear this often if you spook them when they’re getting used to you. If they are in their cage, they are likely barking to communicate with other sugar gliders near them.

The chewing of plastic and rattling inside their cage isn’t very loud, yet can go on all night. However, this is common to many other small pets such as hamsters, gerbils, and rats. You should find a room where they aren’t heard so easily, but not so far you can’t hear them at all either.

Are they noisier when there are more sugar gliders?

These little guys like to be chatty with each other when inside their cages or out. Commonly, they will bark a bit to signal to each other their location. They can also make crabbing sounds as a sign of danger, or if they are unhappy about something.

Sugar gliders that are separated into different cages will also make more noise to call for females or just be chatty. When you go to sleep at night, be sure to have plenty of toys and objects inside their cage so they are kept busy. This can help reduce the amount of barking they make, although it all depends on how active they are too.

Their barking noises can be a sign that they are hungry, so always have their food ready when they wake up. Sugar gliders like to have snacks ready. After some training and handling, they will be just as happy with a sticky treat they can lick off your finger.

Can you (and should you) change a sugar glider’s sleeping habits?

You see a lot of owners that try to raise a sugar glider to be awake in the daytime. This is not only a bad idea, but it can be harmful to their mental health. Ages of living in the darkness have allowed them to best be kept in areas that are dim and calm for them.

When they grow older, they will be used to this kind of lifestyle and be easier to handle. They will also be less prone to be aggressive if they think it’s time to sleep.

The topic of changing a sugar glider’s sleep pattern is highly debated among the sugar glider community. Some owners simply don’t have the patience to change their sleep schedules, while other owners will take every care to set up an environment that simulates a sleep and wake cycle.

If you decide to curb their sleeping habits, you need to simulate light changes so you would need to have total control of the window shades. Add lights on timers to simulate a daytime time illusion to create an artificial sugar glider sleep pattern.

You can further start bringing food to them when it’s time to wake up. All of these tips will take time, so don’t push your sugar glider into a schedule that they aren’t comfortable with. It can take months before you start seeing a change in their sleeping habits. If you own more than one, they all need to follow this pattern that you want them to adjust to.

How active are sugar gliders during the day?

These little creatures will find as much time to sleep all through the day if they are not disturbed. As the seasons change, there may be times you can see them waking up at dusk or early sunset.

If you do wake them up they might be cranky and groggy and will prefer to sleep until it’s completely dark. At this point, you can put them in a pocket pouch until they are fully awake.

Some owners don’t understand they are nighttime animals and try to change their sleeping habits. As we will see now, it’s not really a good idea and can affect your critter in several ways, like triggering an imbalance in their mental health.

If you’re a light sleeper and wake up from hearing your gliders making noises at odd hours of the night, put them in another room. Not so far you can’t hear their crabbing, which can mean they are scared. You can use just enough soundproofing, such as a closed-door or blanket hanging from a doorway.

If you have roommates that don’t like the noise, find a way to keep them quiet in your bedroom. Use a cardboard box with ventilation holes added for air. Add a light fan breeze to allow the air to circulate, although they do like a warm climate.

A word on keeping other pets in the same room

Sugar gliders are naturally wary of animals that can be considered a threat to them. In the wild, they are hunted by birds, feral cats, and lizards that want to eat them. If you also own an alternative pet that makes noise, this can be alarming for your sugar glider.

Always find a place to put lizards or snakes that have a cage with a light or heat lamp out of sight. If your sugar gliders see these animals it can cause them to worry or panic. This is the last thing you want to hear at night.

Perhaps a room divider that doesn’t allow sugar gliders to see these animals will be enough. Snakes and lizards don’t make so much noise, but a sleeping sugar glider can be awakened by the scratching of a lizard in its terrarium. Just be aware of these things that may spook them when they are sleeping.