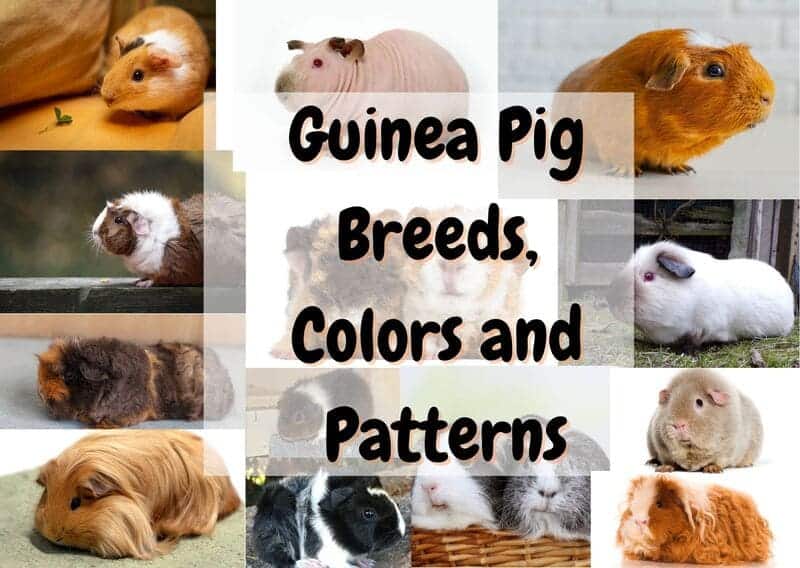 How much do you know about the different breeds and colors of guinea pigs? In fact, there are 15 different breeds with many colors and mutations in between. Finding the best breed for you is what you will learn about in this unique guide.

The American Guinea Pig is an easygoing breed that can live a very long life. This makes them a good choice since they live longer than most cavies. The satin version is more problematic and will have health issues because of how it was bred.

The number of rosettes that cover your average Abyssinian guinea pig can get pretty specific. Most collectors want to see 8-10 of the rosettes covering a guinea pig’s body. This breed is temperate and recommended for advanced owners who raised guinea pigs before.

The Alpaca breed of guinea pigs was first bred in England and has thick and wavy fur all over its body. This breed can live up to 8 years and make them perfect for long-term owners. These are also ideal for novice and advanced owners.

If you want to see the real-life Benjamin Button effect, raising the Baldwin guinea pig is often quite an experience. It is born with normal fur but starts to lose its hair by the time they are two months old. Most Baldwins are only sold to the public after the very end of their shedding.

Crested guinea pigs are good guinea pigs to own and come in a wide variety of colors. Because they have a white crest on their forehead, it looks like a deliberate ‘cowlick’ or ‘bedhead’. Some guinea pig owners will have selective colors that are more desirable than others of this breed.

Himalayan guinea pigs are more sensitive to sunlight than other guinea pigs, so they need a controlled lighting habitat. You can’t take them outside too often for this reason so they will spend most of their life indoors only. These also need experienced guinea pig owners who know how to deal with this breed.

Magpie guinea pigs have black and white stripes and patches that remind the colors of a magpie bird. You don’t see these too often and that is why they are considered rare. These colors are balanced on both sides of their body, giving their coloring more appeal.

The Merino guinea pig is another curly hair breed that has short and spongy fur making them feel like a squeeze toy. This breed also features a crest on its forehead like the white-crested guinea pig.

The Peruvian guinea pig is a special breed that was an innovation that goes back to French and English guinea pig breeders. Their long and soft coat can grow very long and needs continual trimming and grooming. These are better for experienced owners who like grooming their pigs.

Rex guinea pigs are a great breed for novice guinea pig owners. They live at least 6 years and they have a wooly appearance. They are also the type that needs good grooming to keep them this way. Rex breeds are easygoing and have friendly dispositions otherwise.

Silkie guinea pigs do need to have regular grooming since their hair is long. This breed also goes by the name Sheltie in the UK and is collectible if they have a teardrop body shape. These require an owner who is familiar with guinea pigs but they are tolerant of first-time owners.

The Sheba guinea pig is a breed that is also called a Mini Yak due to its wooly appearance. It also can be called the Bedhead’ pig because its hair is full of rosettes on its back. It originated in Australia and crosses an Abyssinian and a Peruvian guinea pig.

Skinny pigs are genetically possible through science and were bred to be hairless for testing in the laboratory. The early versions of these pigs were problematic and suffered from bad health. Newer, improved skinny pigs live longer but need special habitats so they don’t get sick.

Teddy guinea pigs are great for beginners and make a good choice based on appearance. What you need to know is that these guinea pigs need lots of grooming since their belly fur is also long. You will need to have a good grooming brush so their fur stays soft.

Texel guinea pigs come from England and mix the Silkie and Rex breeds to make this guinea pig so different looking. It also needs a lot of grooming to keep its fur from getting tangled. Without grooming regularly, their hair will look matted and need to be cut off.

What colors do guinea pigs come in?

What are the different guinea pig coat types?

Do baby guinea pigs keep their colors when they grow up?

What is the rarest guinea pig breed?

Among the total list of all 12 breeds, the White Crested is considered one that is on the decline as a species. It can still be bought easily enough, but in recent years there are fewer white-crested guinea pigs available.

What are the friendliest guinea pig breeds?

Among the best of all the breeds are the Teddy guinea pigs for their kind and laid-back nature. While they do need more grooming because of their fur, they also don’t mind being groomed more often.

Are some breeds more hypoallergenic than others?

No guinea pigs are hypoallergenic unless you consider getting a skinny pig or Baldwin that loses its hair after 2 months. These hairless breeds could be a good solution since they have very little hair that would be considered an allergen.