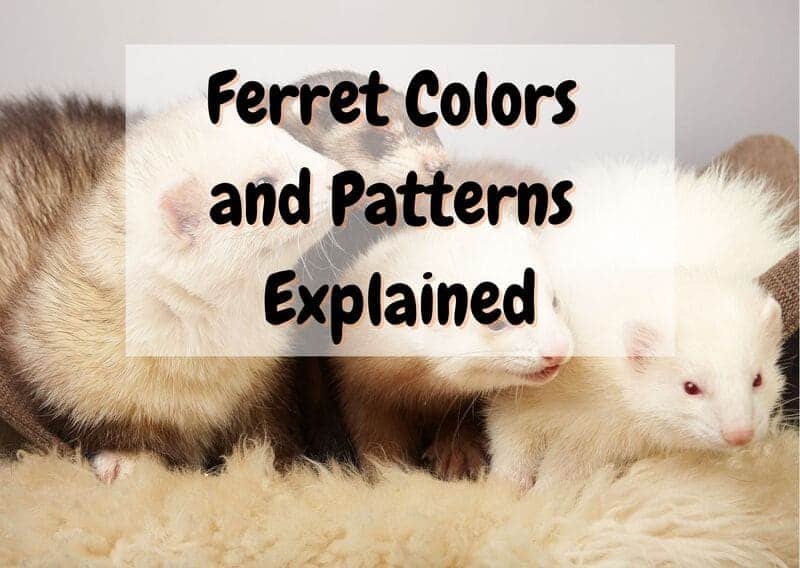 With the increase in interest in ferrets over recent years, we’ve seen the emergence of an incredible diversity of morphs. In other words, there is a ton of different ways that ferrets can look.

What is a ferret morph? It’s the combination of pattern and color that gives each ferret its unique appearance. Although they all belong to the same breed, ferrets can be bred to look very different from each other. For example, a panda ferret is the same breed as a solid chocolate ferret — but they certainly look completely different

In this article, we will discuss 7 colors that ferrets can have, and 13 special patterns and morphs. We’ve even added in some pictures so that you can get a clear sense of what each looks like. After you’ve read that guide, ferret colors and patterns will have no secrets for you.

Let’s start with the basics: even if you are not well-versed in complex ferret morphs, you should be able to identify the 7 basic colors that ferrets can have. Of course, this is not an exact science, and some colors are hard to tell apart, especially if a ferret has two or more.

Albino is possibly the easiest color to identify. It is completely white or off-white. In an albino ferret, the eyes and the nose are a pink color.

If a ferret is white but has dark-colored eyes, it’s not an albino but rather a dark-eyed white ferret.

Ferrets are never completely black. Rather, what we call a “black ferret” is one with black guard hair, even if the undercoat remains white.

A champagne ferret has a delicate hue somewhere in-between brown and cream. Typically, the guard hair is a very light brown, and the undercoat is off-white.

You’ll recognize a cinnamon color in a ferret instantly for its red undertones. These ferrets are a light brown color, with just a touch of ginger. Their undercoat is typically white.

Chocolate ferrets have a medium brown color on the guard hair, with a white undercoat.

The sable color in a ferret is just a touch darker than chocolate. It can be quite hard to tell the two apart, as they also both have a light-colored undercoat and dark eyes. But when in doubt, a darker brown ferret is typically a “sable” color.

Fun fact: sable ferrets actually had their genome sequenced a few years back, in 2014!

Identifying ferret colors is relatively easy, but getting to know patterns is a different pair of hands. Patterns help us to distinguish different types of ferrets, but they are also changeable.

For instance, a ferret may begin its life with a certain pattern and turn into a different one as it gets older. Here are some of the most common ferret patterns.

This pattern is by far the easiest to identify: ferrets are of one solid color, with almost no white on the body. Typically, they may have a little white spot underneath the chin, but no other colors apart from that.

A standard ferret differs from a solid one only slightly. While solids are clearly just one color, a standard ferret may have guard hairs that are of another color, as long as the percentage isn’t too high.

A mutt is a ferret with a complex pattern of different colors. It may have spots, dots, some stripes…When you can’t identify the color pattern of a ferret, it probably is a mutt!

Blaze is one of the most common types of ferrets. It’s also quite specific. A blaze ferret will

You can find several variations of course, such as a chocolate or a sable blaze.

Another easy one to identify, black roan mitts have a little, white, mitten-like coat on their front and back paws. The muzzle is also white and they generally have a white mitt. The rest of their body is a solid, darker color like sable, chocolate, or cinnamon.

A bib has a strong demarcation of color: its whole head, neck, and under the chin will be white or cream, while the rest of the body will have a different color.

Panda ferrets are not actually black and white – they can be white or cream and any other dark color. Typically, their head and bib will be white, they will have a darker mid-section and white or cream feet.

To identify a roan silver, you’ll have to pay close attention to their hairs. At least half of its guard hair must be white or cream, with darker hair scattered over its body.

Every time they shed, roan silver ferrets tend to be of a lighter color.

A milk mouth ferret is a dark color such as chocolate or black, except for a white muzzle. These are very easy to identify and very aptly named!

The patterns discussed above generally concern where the white (if any) and darker parts of fur are located on the body of a ferret. Apart from that, patterns can apply to lots of different kinds of ferrets: you can find sable mitts, chocolate pandas, black standards…And then there are some specific patterns that come in just one color. Here are a few of them.

Albinos are well-known and ever-popular among ferret lovers. They have a solid white coat with pink eyes and nose.

So-called after Dalmatian dogs, Dalmatian ferrets are white with black spots on their body. They are much rarer than many of their counterparts.

Heavy silver ferrets have an interesting pattern of hairs that are half-black and half-white, giving them a unique, shiny silver appearance. They generally have a white muzzle and mitts, with the rest of their body silvery gray.

Siamese ferrets are very easy to identify, with a dark mask around their eyes. They are typically a light color like cinnamon and chocolate, with darker, black, or sable legs and tails.

Yes, the fur of a ferret can sometimes change color. A few of the factors that could cause that change are the passing of seasons, old age, diet, and hormonal changes. Some ferrets get white or whiter during winter and regain a darker hair color during the summer months.

Male ferrets are known to turn a yellowy color during the breeding season, in the spring. Other ferrets may simply be getting whiter because they are aging, just like humans do. Finally, an abrupt change in color could be a sign that your ferret is lacking certain essential nutrients in his diet.

Can Ferrets Change From One Morph To Another?

Yes, but not significantly. Don’t expect a bibbed chocolate ferret to turn into a solid black for example. But with other morphs, there is a possibility for change. For example, ferrets could change from solid to standard with the passing of seasons.

How Many Types Of Ferrets Are There?

Taking into consideration all of the possible colors and patterns combination, it’s hard to say how many types of ferrets there are. Suffice to say, it is well over 30.

Do Colors and Morphs Affect The Value Of a Ferret?

Yes, as some morphs are in higher demand than others, the price of the ferret tends to be higher. Albino ferrets are pretty standard and are usually among the cheapest ones to buy from a breeder. Black ferrets, on the other hand, are much rarer, and usually sell for around twice the price.

Most other ferrets have a cost somewhere in the middle – but do expect to pay more for a solid color, or for a rarer pattern like Dalmatian.

Are Some Morphs More Docile or Aggressive Than Others?

There are definitely some differences between morphs in terms of character. For example, albino ferrets are known for being docile and gentle. They are very affectionate and energetic, making them good companions. Other ferrets may be more aggressive, but it’s hard to tell from color alone.

And remember: all ferrets are highly sociable and need a lot of interaction, no matter what their color. There are a lot more factors that affect the personality of a ferret, so we recommend not focusing on their color too much.

What is The Best Morph or Pattern To Own As a Pet?

The simple answer to this question is…the one that you like best! We all have different aesthetic tastes, and you can get along with a ferret of whichever morph or pattern. So make sure to choose one that you just love the look of, and one that you’ll be proud to show your friends.