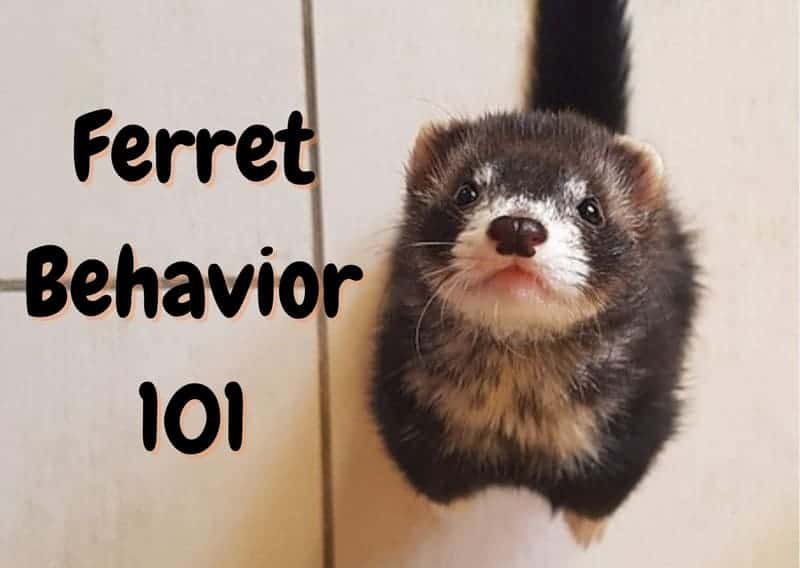 Ferrets are fun to be around. They generally play, drag things around like maniacs, drag their butts on the floor, and like being rambunctious little rascals. But how do you know what your ferret is telling you? Here’s a short list of their essential behaviors.

With this in-depth guide, We will go through everything you need to know about your ferret behavior. We will talk about ferrets’ verbal cues and how they express their feelings, body language secrets, and other quirky mannerisms.

Ferrets are social creatures. It’s almost always a good idea to have two ferrets so they can play and socialize with each other without getting bored. The space for your ferret should also be large enough to accommodate its social needs, as ferrets can become territorial.

When you have multiple ferrets playing, you will see them wrestle. This behavior is typical for all ferrets, so don’t worry if it looks aggressive. It’s the ferret’s way of establishing who is more dominant, but it’s still all in good fun.

Whenever ferrets are very happy or playful, they make clucking noises called “dooking“. You will find ferrets are constantly dooking when they do the dance for joy, cackling as they hop and jump.

Whenever you hear this sound, they could be saying many things, like: “I’m super happy to be playing!” Or, “Oh my gosh, a new smell!” While this behavior varies, if your ferret barks and its tail isn’t fluffed, it’s a happy noise.

While it’s not very common, happy ferrets can wag their tails like dogs, too. If this happens to you, know that your ferret is extra delighted.

Sometimes, they will play by chasing each other. This sort of play is reminiscent of hunting behavior, where the young “train” themselves to become better predators by playing a game of chase. Expect these bouts of gameplay to be rowdy, and full of antics. You might be privy to the dance for joy showing up as well, so have fun!

You may also find that your ferrets will nip at your toes and run away. They don’t want to hurt you. They are telling you they want to play chase. If it happens to you, it’s a sure sign of trust.

3. The Dance For Joy

Ferrets also freak out continually, but it’s likely not due to stress. They are telling you that they are excited. When ferrets are happy, they do “The Dance For Joy.” When you see frenzied sideways hopping, frantic leaps, zoomies, and bumping into things, you will know that your ferret is likely very happy and playful.

Ferrets are animals that literally cannot contain themselves when they are full of energy and joy. To release this tension, they act out in this funny manner around you or their favorite toys.

When ferrets are angry or scared, they will hiss. They are essentially saying: “Don’t mess with me, or I’ll mess with you!”

When stressed, your ferret’s behavior will also be characterized by frenzied hopping and hissing with a poofed-out tail. You’ll see every one of their hairs on the tail standing on end. It’s the ferret’s way of appearing large to ward off predators.

Upset ferrets will bark loudly or whimper quietly. This behavior is prominent when the ferret wants attention, is hurt, or is stuck somewhere. This cue is useful in case your ferret finds itself in a spot it shouldn’t be. Make sure to evaluate the situation appropriately. They might want to be somewhere else, or they could need some cuddles.

Another way ferrets attempt to create dominance is by grabbing each other by the necks or other areas and shaking them. Shaking can occur if there is a new ferret in the home, or if you have extra-territorial ferrets. While this behavior shouldn’t hurt them, you should closely monitor them, so the ferrets learn to play peacefully. This is especially important if the age gap between two ferrets is big.

If you own a small ferret, it will likely honk as a sign that it’s nervous. It’s nothing to worry over, as it is just a sign that your ferret is scared but curious.

Before handling your ferret

Take care to evaluate the sounds your ferret makes before handling them. You wouldn’t want them to bite you when they are displaying this sort of hissing behavior. If your ferret is doing a war dance, give him some space and let him cool down.

There are some critical verbal cues from ferrets that you should know to care for them properly. These verbal cues could potentially save your ferret’s life, so pay attention. In all cases, these warning cues mean that they will most probably need a visit to the vet.

Ferrets have behaviors that they will exhibit to you almost as soon as you get one. Here are a few things that you should know that your ferret will do, and there will be explanations as to why they do these mannerisms in the first place:

Be careful if you have jewelry, shoes, keys, and small shiny objects near your ferret – your little thief will attempt to grab these objects and take them away to a hiding area or corner of their playpen.

It’s natural for all ferrets to want to hoard things. They will typically grab small objects with their paws and teeth. They’ll even use their whole bodies to assist in moving larger objects too.

This behavior can be both devastating or funny, depending on how prepared you are for this eventual circumstance. Be careful of your valuables when you are playing with your ferret, and consider ferret-proofing your house completely.

You will also want to keep your laundry under lock and key. Some ferrets will want to steal your clothes to put into their bedding; if you find them doing this, it’s a sure sign that they find comfort in your scent. They may want something comfortable to sleep on, too.

Ferret sleep cycles deserve a section in the article due to how important sleep is for ferrets. In some ways, ferrets can be similar to cats, especially when you consider their sleep cycles.

Ferrets need several hours of sleep (14-18 hours a day) inside an enclosed area, which makes them perfect for people who work a lot during the day. Just make sure to take out your ferret and play with them to satisfy its natural curiosity.

You will find that if you try to wake up a sleeping ferret, it will sometimes not react to anything you do for a short while. It will be limp, unable to respond to poking or loud noises, and immune to other disturbances.

Do not worry, because this is perfectly natural. Your ferret is in something called a “dead sleep”. Ferrets sleep deeply because they are very active when awake.

Sometimes, you will hear noises, like clucking, barking, dooking, whimpering, or snoring in the enclosure of your ferret’s bed. They are likely dreaming. Research shows that ferrets dream similarly to humans and dogs.

My Ferret Keeps Slamming Into Things. Is Something Wrong?

Do not be alarmed. Ferrets generally have lousy eyesight, and can only see a few feet in front of them. Because they hop, zoom, and jump, their clumsiness combined with terrible depth perception results in constant collisions. As your ferret gets to know his surroundings, this will occur less. But don’t be surprised to see it still happening when they get overly excited.

My Ferret is Very Messy. Is This Normal?

When ferrets eat, you may notice them digging inside their bowls and scattering their food everywhere. You shouldn’t worry about stopping this behavior, because ferrets are natural burrowers.

Several ferrets will eat the food they spread as well, so you will likely not have to worry too much about cleaning up after them.

They can also burrow into their litter box, depending on the ferret. This behavior is normal, but you can mitigate this by establishing a poo pad instead of a litter box when potty-training your ferret.

You may find ferrets dunking their heads into their water bowls, too. While this can be worrisome, it’s another quirk they adapted when they used to scavenge for food underwater, which is nothing to worry about.

My Ferret Keeps Backing Up Into The Corner. What’s Up With That?

This type of behavior is prevalent in ferrets. There are two reasons why your ferret is backing into a corner of the play area

They are looking for a place to go to the bathroom

Cornering is due to a natural response against predators, where the ferret could theoretically protect itself better as it does its business. Ferrets do this to mark territory, so it could be hard to teach your ferrets to stop this behavior in the future. You can minimize this by tracking down their favorite corners and placing specialized poo pads.

If this behavior must be corrected, establishing a larger litter box for your ferret and treating the corner with chemicals could fix the problem too. Also, every time your ferret friend corners, immediately placing him into the litterbox may help.

They are cornering themselves when scared

This behavior is characterized by a poofy tail and a hissing sound. The best way to stop this behavior is to coo and calm your ferret or give him some space.

Will My Ferret Recognize Me?

Yes, ferrets recognize their owners. The more you play with your ferrets and engage them during their playtime, the more they will engage with you. They may not be able to see you too well, but they will imprint on your scent and know when you are in the room with them.

When a ferret starts bringing your things into its hidey-hole or cage, nips at your toes, or regularly visits you, you will know they miss you and want your interaction. The best way to foster this reaction is by continually being with your ferrets when they are ready to play.

How Do I Know If My Ferret Is Dying?

If your ferret is constantly whimpering or wheezing, it may be having trouble. Because ferrets live short lives, it’s important to remember that if they seem weak and unplayful, something may be going wrong.

There is a multitude of reasons why your ferret would be weak, from cancers and tumors to heart issues related to old age. If your ferret doesn’t seem to be as active as it once was, it’s a good sign that you should take it to a vet. When a ferret has reached the end of its life, the best thing you can do is comfort your ferret in its last moments.