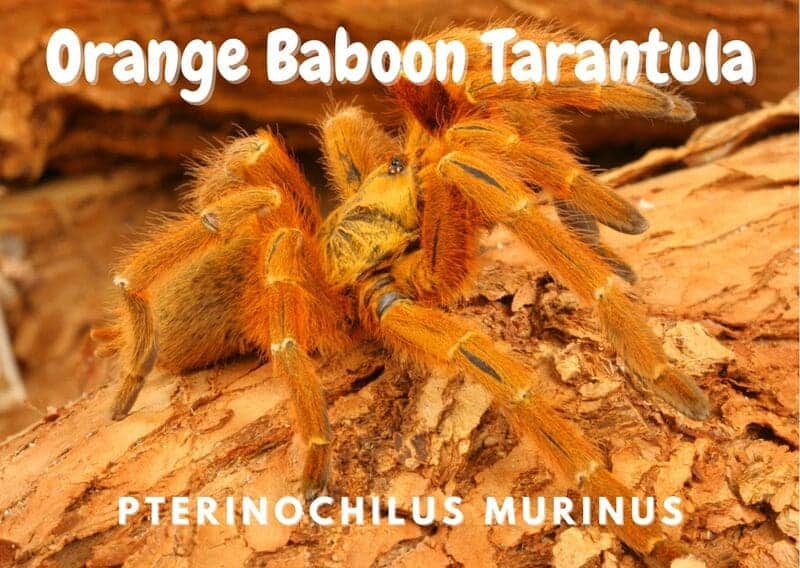 Some spiders are truly a stand-out variety. The Pterinochilus murinus aka Orange Baboon tarantula is one of them. Coming from dry African scrublands, this species is known to be filled with plenty of wild spirits.

Not an easy spider by any means, this species is pleasantly colored with colors that tell you it will be trouble if you dare to touch it. Let’s learn some more about OBT.

Pterinochilus murinus– Discovered by Reginald Innes Pocock (1897) Given the name Orange Baboon Tarantula- OBT. It is also known to spider experts as the Orange Bitey Thing.

Characteristics Of The Orange Baboon Tarantula

The Orange Baboon Tarantula is quite obvious to pick out, with its incredible rusty-red color over its’ entire body and legs. Over the carapace, you will notice a star-like pattern also.

The abdomen also features a distinct wishbone pattern followed by various spots and line markings. Leg segments are visible and add to the overall look of this OBT. Sometimes the underside of their legs can have an iridescent green and blue sheen to them.

Females are known to grow as long as 6 inches in length (over 15cm). Males, however, are roughly 5 inches (13cm) but have longer skinnier legs. Slings measure 0.5″ in length and grow to 1.5″ after their first 4 molts.

This spider is very defensive and will immediately rear up with its front legs when approached. Despite this, they can be prone to biting if they cannot escape. For this reason, only the most advanced handlers should decide to own this species. They will also hiss loudly letting anyone know it does not want to be bothered.

As you might expect, the females are dominating the life span record for the males. A female can live from 15-20 years with no problem. The male, on the other hand, will live as much as 4-5 years if they are lucky, and haven’t encountered mating attacks.

The experts all agree that this OBT should not be handled except when moving or taking it to a new enclosure. It just is too aggressive to handle safely. It will bite, and the bite itself is extremely painful!

Some have described the pain as muscle cramping, swelling, and pain in the bite area. The venom is not lethal but you should be warned, this is one spider you want to avoid touching.

You will find online a few videos of Pterinochilus Murinus owners handling their T. Here is one below, however, be warned, this is not one thing we advise you do – ever.

The beautiful Orange Baboon Tarantula is absolutely an advanced spider. Their nature is not well-suited for intermediate collectors, and even some experts are not ready to deal with this one. Perhaps this is why they are often collected since they have such a nasty disposition.

This spider species will need a 5-10 gallon tank to house it. You will also need many safeguards to prevent escape. It doesn’t readily like to escape, so the top lid and access windows need to be strong enough.

We recommend a glass enclosure for a couple of good reasons. Plastic enclosures can be fine but they don’t last nearly as long as glass. Repeated washings will dull the surface and not make this species as viewable too. Over time, (if you have a female) it’s better to have a showcase tank that shows it off in style.

Normal cleaning duties such as changing the water and removing dried insect bolus or left-over prey are daily. A good monthly cleaning is advised due to the substrate being moist. You don’t want mold or fungus growing in that material. It also helps to make sure there is no outbreak of possible mite or parasite invasions too.

The addition of obstacles and various hides will make this spider more interesting. It doesn’t require much but the decorations you put into the habitat should be ceramic or plastic. This is mainly for cleaning ease since this species is a heavy webber. Rock and plastic plants are good additions too.

Your orange bitey thing will like 65% humidity in the tank for the most part. A hygrometer will make all the difference to maintain that level. Most experts also think that 60-70% is fine for yearly conditions they are used to in the wild. Add a small heating pad under your tank, this should have a temperature knob to keep the heat constant.

In the wild, the temperature in the Zambezi Valley can range from 80-90F from season to season. Your habitat should be 78-82F just to simulate a more mild weather pattern. Depending on where you live, outdoor temperatures are blistering hot; you need to turn off the heating pad.

Use an incandescent lamp that has a 30-watt bulb inside. Your spider may like to get some sunshine from time to time. But be sure to have a shaded spot so it can relax. Since it likes to burrow it may not be out on some days if the weather is too hot.

This spider will like to burrow so a good substrate material is recommended. Before you put anything into the habitat, the material should all be free from bacteria. It’s possible, that living creatures in the soil or moss can harm your spider too. It will need to be cooked in an oven to kill anything that moves. Use an oven with 150F for 1 hour to be sure your substrate doesn’t become a death trap for your spider.

Use this cool mixture recipe. Peat moss and coconut fiber mixed with topsoil and vermiculite. They should be equal parts. The vermiculite helps retain water and is used by gardeners in the form of pellet grains. Place 4-5 inches of substrate mix on the bottom of your tank. Spiderlings need only half of that thickness. Don’t overwet them either and pay attention to the hygrometer.

They like to dine on cockroaches and crickets, but you can also introduce grasshoppers and even dubia roaches. The smaller slings will need pinhead crickets and mealworms.

How often does the OBT need feeding?

Mature adults will eat once a week but are very hardy for longer waiting times in between feeding. Slings will eat more often but not more than twice a week and especially not after they have molted. This applies to the mature spiders too, since their exoskeleton or fangs will not hard enough to pierce hard insect shells.

Yes, the orange baboon spider needs plenty of water too. It can dehydrate easily so that water helps regulate their body mass. Put a left-over twist-off lid from a tomato sauce jar or honey jar. Bury it into the substrate until it meets the same level. Remove, clean, and refill it every day.

Because this spider comes from a region where they are hearty enough to survive, they don’t have any problems. The substrate is the main issue that needs attention. Some owners swear that bone dry is best, while experts know that some moisture is good. It just keeps a burrow from collapsing. Slightly damp soil in that African region is normal.

Molting, on the other hand, is part of their yearly cycle to grow bigger. They will stop feeding and drinking water to shrink. If you see your spider on its’ back one day, don’t panic. It will likely molt in a day or two. After that, it will go back to a safe place to dry out for a while. If you follow the sterilization of the substrate correctly, then mites or parasites will be no problem either.

The OBT is often nasty to people but is never too unkind to reproduce. This species can breed more than a couple of times in the same year creating a double-clutch that will provide up to 200 eggs. The female will make a silk cocoon and each clutch will be separate from the other. It takes 2 years for spiderlings to be mature enough to reproduce.

After their 2nd year, molt males will begin making the sperm web and then be ready for pairing with a female. Although you might have made preparations by feeding them well, attacks by the female can usually kill the male. If you decide to pair them for mating, be sure to have more than one male on hand.

How many eggs does a female OBT lay?

If everything was a good paring (and hopefully your male escaped without becoming a meal) she will then lay eggs. It can be 75-100 will hatch in 5 weeks. There are cases where she can be paired again (to be double sure) which can result in a double-clutching of egg sacks.

What to do with the spiderlings

After collecting newly hatch spiders they can be transferred to their little habitat. With so many, you might decide to keep them inside small containers. Sell them to other enthusiasts or private exotic pet stores. You can benefit from the extra income if the mating was a success. Pet stores will sell the little ones at around 50 dollars per spiderling.

Availability of the OBT

These are not rare to find but are in high demand because they are exotic, aggressive, and excellent Webbers. They are best-suited when raising them as spiderlings, and you’ll see how their attitude gives them the unique name for being so headstrong. If you have the appropriate knowledge for this level of spider, they won’t be hard to find.