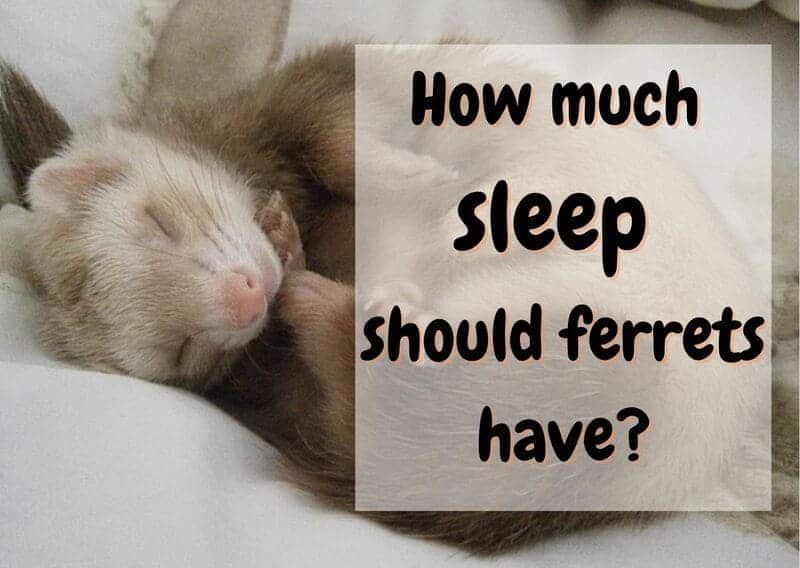 One question that is commonly raised by new ferret owners and individuals interested in owning a ferret is: “how much sleep should a ferret have?”

A ferret should get between 14 to 18 hours of sleep every day. While they don’t have a tendency to sleep for a long, uninterrupted period like humans, ferrets do sleep for many shorter periods throughout the day, waking for play or food and water between 8 to 10 times per day.

The distinct difference between the way in which ferrets sleep and the way in which humans sleep can often cause confusion and frustration in new owners, as they adjust to the seemingly random sleep schedule of their new pet.

How Many Hours Should A Ferret Sleep?

The amount of sleep that a ferret should be getting throughout the day is approximately 16 hours, though it is common for them to have as little as 14 hours or as much as 18 hours of sleep.

With several sleep cycles throughout the day, ferrets experience restfulness through a number of short REM cycles that end up totaling approximately 40% of their sleep time, according to a study. This is very different from our own extended sleep cycle, in which we experience 4 to 5 REM cycles within one sleep period that lasts for about 20% to 25% of our total sleep time.

While it seems like ferrets sleep a lot more than they need, this is simply because humans have a tendency to determine what is considered ‘normal’ behavior by basing it on their own needs. In reality, ferrets truly do need these long periods of sleep, broken up by several periods of activity.

In fact, 75% of a ferret’s day is spent sleeping, while the remaining 25% is spent playing. So, you can put your concerns about having an overly lazy pet to rest.

Adapting To Your Ferret’s Sleep Pattern

When considering your ferret’s sleep habits, you need to be sure to turn your concern towards your own habits as well if you want to understand their potentially confusing sleep patterns.

For example, do you work from home, or are you out of the house most of the day? If there is nothing to do and nobody to play with, it shouldn’t be surprising that your ferret would rather take a much-deserved nap while you are at work than wait around anxiously for your return.

Does your ferret have a friend? While ferrets that are unfamiliar with each other may show a tendency to fight, ferrets that live together in domestic bliss adopt a pattern of sleeping, playing, and grooming at the same time.

The final thought to consider is whether your ferret truly is asleep, or if they are merely drowsing. Studies have shown that ferrets spend a significant amount of time in a drowsy state that, while not technically sleeping, does have the appearance of sleep.

Factors That Impact How Much Sleep Your Ferret Should Get

The amount of time that your ferret sleeps can be affected by a number of different factors. So, before you worry about an overly sleepy ferret or an unusually active ferret, make sure to take the following factors into consideration:

The age of your ferret, like most other pets, contributes significantly to the amount of sleep that they require. Females also tend to be the more active of the two genders, while males enjoy slightly more sleep.

Ferrets go through several stages of growth that can impact the amount that they sleep. As babies, they tend to sleep a lot – even more than the possible 18 hours that an adult ferret can spend sleeping.

As they get older their energy level will naturally increase, and due to this rapid increase in energy young ferrets are actually far more active than their adult counterparts, despite still being in the juvenile stages of life.

However, once they begin heading into their elderly years, they return to approximately the same sleep schedule as they had when they were first babies, adopting a longer sleep schedule that can include up to 20 hours of sleep.

Similar to their more common domestic pals, ferrets will tend to match the energy level of their owners. If you work all day and come home tired and lethargic, then there is a pretty good chance that you will have a ferret that adopts this expected sedentary lifestyle and they will spend a higher amount of time sleeping.

The flip side of this is that if you do regularly play with your ferret, they will likely be more active during their playtime, but will hit the pillow hard when play is over. This is a simple matter of your ferret expending a large amount of energy and simply needing a break.

Ferret’s bodies are capable of adapting to the seasonal changes of our world and they automatically keep track of these changes by using the total amount of daylight hours within a given 24-hour cycle. It is an automatic process, much like our own circadian rhythm, which signals our body and mind to eat, sleep, and increase wakefulness throughout the day.

So, as the nights lengthen and fall turns to winter, you should notice that your ferret increases the amount of time that they sleep.

However, because this is an almost automatic process, you have to be careful to allow your ferret the accessibility to natural light so that their bodies can go through this natural change. If your ferret is kept in artificial light for its entire life, there is a chance that it can develop diseases, such as adrenal disease.

Less severe conditions can affect your ferret, such as levels of stress. High-stress environments with a lot of noise and disruption will negatively impact your ferret’s sleep cycle and will lead to anxious behavior.

On the other side of the spectrum, an environment that is peaceful and serene can significantly increase your ferret’s feelings of safety, leading to longer and deeper sleep periods.

It should be noted that ferrets are capable of going into a sleep so deep that you may think that your quiet, serene environment has killed them. Watch how nothing will wake up this ferret from slumber.

This dead-like sleep appears at first as though they are merely sleeping. Then, after you pick them up, give them a little nudge or rub their belly, you will soon realize that any dog, cat, or human would have already woken up. This can trigger alarm bells to sound in your head, but there are simple ways to check and make sure that they are okay.

To ensure proper blood flow and oxygen are going to their head, check their gums to make sure that they are still pink in color. Listen carefully to their heart and make sure that it is still beating, then try your best to detect their breathing.

Once you have made sure that their heart is beating, that they are breathing, and that there is blood flow and oxygen going to their head, you can rest easy and let them do the same – they will definitely wake up on their own when they are ready.

Getting to sleep can be an issue for some pets, but ferrets have a tendency to sleep nearly anywhere. This can present some issues if you don’t keep an eye on them.

While they are willing to pass out on the carpet, the floor, the stairs, and anywhere else, ferrets love to sleep in dark, warm places. As burrowing animals, they can often be found under blankets, under pillows, hiding under your furniture, in the clothes hamper or closet, or in hammocks which you can hang inside the cage.

If your ferret seems to prefer a specific place around your house, but you need them to sleep in their cage for safety, placing something with the same scent and feel inside their favorite sleeping area should do the trick.