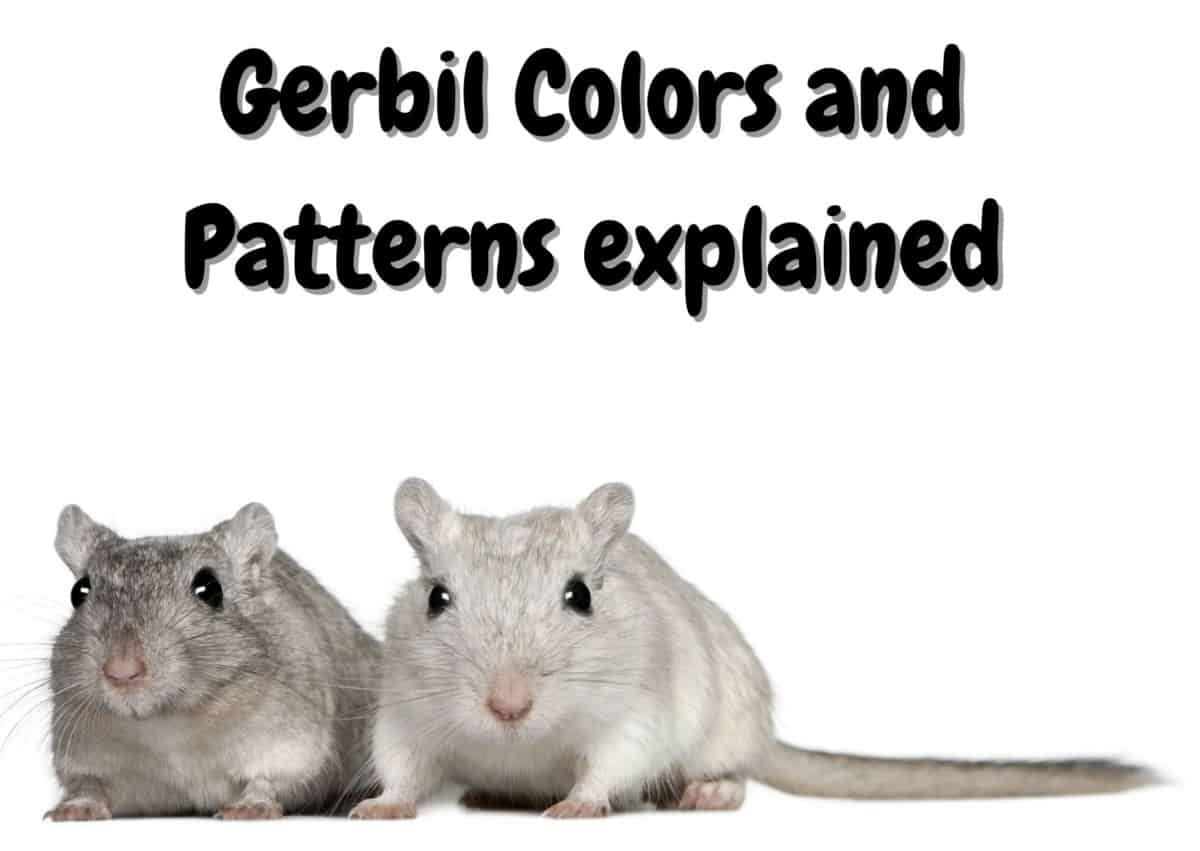 Gerbils are a wide diversity of breeds and colors that make them universally appealing. There are so many varieties within the gerbil species, and it can be pretty head-spinning to name them all. This brief guide will best detail which colors, patterns, and breeds you should know about.

Talk about a burst of color that you can encounter with the spectrum of colors, shades, and tones that gerbils can exhibit. While most pet stores will offer just 8 basic colors to choose from, there are actually 40 different color variants. Let’s have a look at some of the most common gerbil colors.

Most of these gerbils have brown fur that has gray and orange running through their hair. The eyes will be black and the belly is colored white. Their skin will range from pink to gray with pink-colored arms and black-tipped ears.

These gerbils are mostly gray with a generous peppering of black-tipped hairs all over their body. They have black eyes and their coat gets darker in the winter.

This is nearly the same as the Colorpoint Agouti but is gray-colored with brown peppered tips instead. The eyes are black or shades of gray and have a dark-tipped tail stripe.

This gerbil is primarily gray-colored with black tips over much of its coat. The belly is white but the eyes are genetically black.

This version has light gray-colored fur with dark peppering along with the tips. They also have white bellies and black eyes.

These have nice rich beige and yellow coats and have white bellies. Most breeds in this color will have a gray-colored rump.

These red-eyed and white-bellied gerbils have a lavish cream color with no gray on the rump. This Cream variant often looks similar to the Argente Golden, though in a lighter version.

This is a mixture of the Argente Golden and Argente Cream, with red eyes and a white belly. There is also a Duvet color that appears Cream-colored with a bit more yellow involved.

Aside from the ones that are totally black all over, some versions have white patches under the chin or on the tips of their paws. Younger pups can appear a dark slate color with a pinkish belly that will darken over time. Their eyes are primarily black and have a shiny sheen with very little fuzz.

Lilac-colored gerbils are primarily dark gray with no black fur showing anywhere. The sheen is a resulting Lilac appearance with most of these gerbils having white marks on their paws. The eyes are always colored red and this variant stays this color all their life.

For those who like red-eye gerbils, this version offers a light gray color all over. The pups will appear white at first but then turn totally gray once fully grown.

These pink-eyed gerbils have a gray color that is closer to Lilac and Dove-colored gerbils. The head especially will be a little bit darker in this variant.

This is exactly how it sounds since this is a white gerbil with black eyes. There may also be accents of gray on the nose and ear tips, but they keep their feet and tail a pink color.

This is an all-white gerbil that is colored totally white from head to rump. The eyes are a nice pink and pups will appear pink for a while until their white fur grows in.

This is nearly identical to the (PEW) version except that the tail will start turning dark when they reach 4 to 6 months old. The color of their tail then appears to be a brown or grey color.

This is a deep orange color all over their body including the belly, with characteristic dark black eyes. The eyes, ears, and base of the tail will all have dark tinting over the skin.

Just like the Dark-Eyed Honey, this version is a lighter orange-cream color. This version will also have a light white-colored belly that rises up the side of the gerbil.

This is a creamy white color that covers most of the white fur with small amounts of orange in the cream color. There is a white diamond patch on the top of their head.

This color combines an orange coat that contains brown to black-tipped hairs over most of their body. The eyes will always be black and the color variations will all range from brown or black tips.

This is similar to the Nutmeg, only the orange color is replaced with a grey undercoat and black eyes. This color doesn’t include brown tips, so only black tips are seen instead.

The appearance is mostly white with light grey shading on their feet, nose, and tipped ears. This gerbil has eyes that are also gray colored.

This is mistaken as black but is actually a dark gray color that has a high slate sheen. Most of the time, you need a true black next to a slate to see the color difference.

This color combination includes pink, peach, and gray all at the same time. The tips of the hair are black along with the eyes, and the ear tips are lightly-tinted black.

The overall color is a majority of solid browns and dark accents on the nose, ears, and tail. They have pinkish-gray skin with dark gray-colored eyes.

You will see light brown and gray color over most of the gerbil coat with darker areas on the base of the tail and head. Most of the shine on their coat looks top-dusted with dark tones.

Also known as orange siamese, grown gerbils in this shade are white with dashes of orange down their tail and along the top of the head. The tips of these hairs also have creamy highlights and paws that are darkened.

This is also known as Champagne and looks similar to an orange tail. Their tail has a white tip and pink paws but there is a white diamond spot on the top of the head.

Spotted gerbils can be any color but have dominant white spots on the head, neck, or down the nape of their neck. Often they have a diamond marking on the top of their head too.

With all pied gerbils, they have white markings on their forehead. These can run down the neck and shoulders that may also run down the back.

These gerbils have mottle markings along with the lower back and hindquarters. There is no limit to the color that this gerbil can be.

This version has heavier mottling all over the body and isn’t limited to the hindquarters. This is also allowing a wide range of gerbil colors among the white mottle spots.

The total number of breeds numbers 110 various breeds from all over the world. Getting your hands on some of the rarest types is problematic since some states don’t even allow them. This is because they present a rodent threat that can quickly spread out of control if two of them happen to get loose. These gerbil breeds are actually classified as breeds according to the country in which they were first discovered.

What is the most popular gerbil?

Mongolian gerbils are very popular since they come in a good variety of colors. In recent years, there has been a debate over the Mongolian gerbil VS Fat-tailed gerbil as to which one makes the best pet. The fat-tailed gerbils often live longer over Mongolian breeds and are also very docile, but a little bit more expensive too.

What is the best gerbil breed to keep as a pet?

Of course, you are limited to the breed of gerbils if the pet store only offers a select type. Mongolian gerbils are good pets, but the popularity of fat-tailed gerbils is on the rise. If you get in touch with private breeders, you may get your hands on this harder-to-find breed.