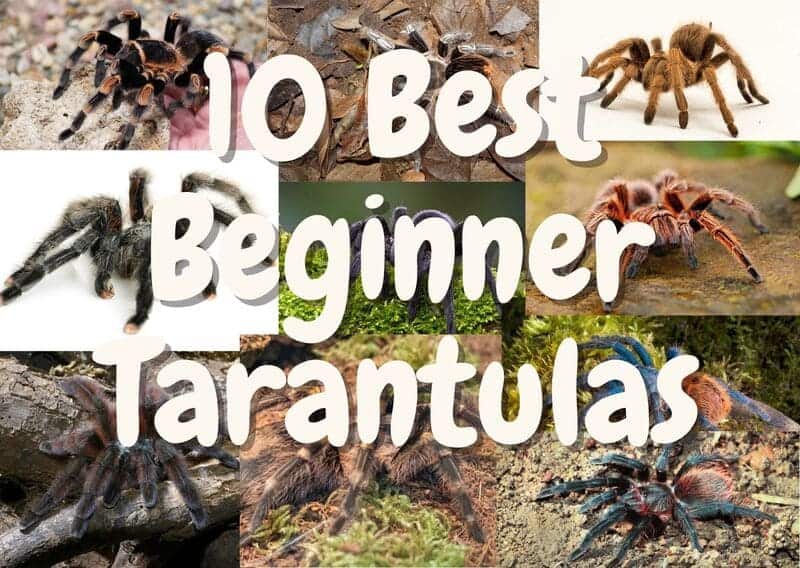 What are the best beginner tarantulas on the market? With around 850 species of Tarantulas around the world and new species being discovered on a regular basis in the heart of the Amazon forest, you could say that you are spoiled for choice. However, not all species are a good option for a first-time tarantula owner.

The 10 best tarantulas species for beginners are:

In this post, we will take a closer look at these five tarantula species a complete novice will be most comfortable with, mainly due to their low-maintenance profile and their docile nature. Without further ado, let’s get to know the 10 winners.

The Arizona Blonde tarantula, also called Desert Blonde and Palomino Blonde, is found in Mexico, Arizona, and California. You can tell it’s an Arizona Blonde by the exotic blonde color on its body and lower legs, along with black hair on its femurs and brown hair on its abdomen.

The Mexican Red Knee tarantula lives in the semi-desert land of Mexico and Panama. You can identify it’s a Mexican Red Knee by its black abdomen and few strands of red hair and black legs with red, tan, and orange stripes.

Even though this tarantula likes to burrow in the sand, you should avoid placing sand in its terrarium, as it can block its book lungs and result in death. However, you don’t have to deprive them of their favorite pastime. Instead of sand, use a shallow, 2 to 3-inch, substrate with cork bark, laid horizontally on top of it. However, with a shallow substrate, extra care is needed to ensure no décor falls into it. Use low-level lighting and keep the temperature between 69 to 78 degrees Fahrenheit with a relative humidity of between 40% to 60%.

Your average Brazilian Black is soft and velvety jet black with even hairs all over its body. There are also some bluish to grey highlights at the tip of the legs. Obviously, its abdomen and legs have a metallic blue sheen, but not limited to chocolate brown shades.

The Antilles Pinktoe tarantula is a very colorful spider. You might see variants that have vivid rosy-red and electric blue highlights. There is another version that can appear to be metallic green with plenty of purple-looking highlights. They can even have bright red abdomens or striped patterns forming ornate designs.

You just never know what color the carapace will be in the end though since these can become bluish-green or iridescent green with blue, and even versions of chocolate.

These impressive beauties that come from Argentina and Paraguay are an overall dark brown tarantula. The upper legs along the body are often dark black followed by rich orange hair emerging at the initial exoskeleton joint. The rest of the abdomen and legs are tipped with light orange or pink hairs.

The Mexican Red Rump comes from Central America and has an overall black body with black legs. The abdomen has vivid bright red setae that stand out.

The Green Bottle Blue tarantula is an easy one to spot due to its blue legs, green carapace, and orange-rust colored setae on its abdomen. This import from Northern Venezuela also has dark-tipped feet and rusty setae hairs over much of their legs.