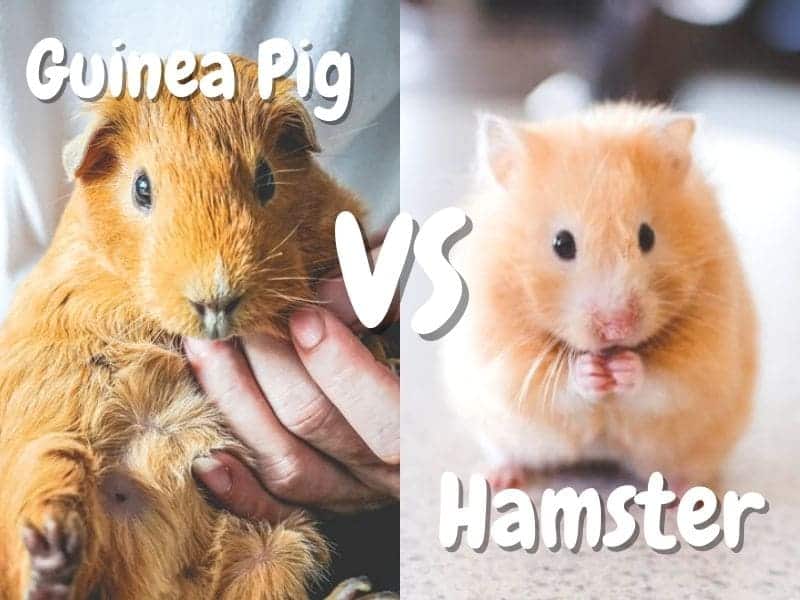 Both guinea pigs and hamsters are very popular exotic pets, although they are quite different in many aspects. In the United States alone, the number of households keeping a hamster or a guinea pig is about the same, at about 1.5 million each. But is one easier to keep than the other?

In this article, we will compare the two species so that you have a better understanding of their differences and make an educated decision about which one you might want to consider as a pet.

1. Physical Differences: Guinea Pigs Are Much Larger Than Hamsters

Physically guinea pigs are fairly different. First of all, guinea pigs are about 4 to 10 times the size of a hamster, depending on the breed. Guinea pigs can weigh anywhere from 1.5 to 4 pounds, while hamsters are typically between 1 and 4 ounces. Also, guinea pigs have large round heads and bodies, and they do not have tails.

Hamsters have features that are much more rodent-like. They tend to have tails, though they are fairly short on most hamster breeds (except for the Chinese hamster). They typically have round ears, short faces, and blunt noses. Hamsters also have fairly distinctive cheek pouches that they use to carry around food.

There are other physical differences between baby hamsters (called pups) and baby guinea pigs (called piglets). Hamster babies are born hairless and blind, while guinea pig babies are more fully-developed when firstborn with lots of hair.

2. Personalities and Temperament: Guinea Pigs Are More Social Than Hamsters

Hamsters are very active and curious creatures. Guinea pigs are also active, but not nearly as much as hamsters are. For this reason, you have to make sure your hamsters have plenty of ways to exercise and get their energy out. You are going to want a wheel of some sort and a climbing toy or two in the cage.

Takeaway Point: Keeping One or Several?

If you are wanting to keep several animals together, the guinea pig is the best option. Guinea pigs are social creatures so it’s best to get multiple of them at the same time. On the other hand, hamsters are better if you are only wanting one new pet right now. With some dwarf species, you may be able to keep multiple hamsters together, but there is always a chance that they will turn on each other and start fighting.

Guinea pigs have significantly longer lifespans than hamsters. On average, guinea pigs live somewhere between 5 and 8 years. How long your guinea pig lives depends on a variety of different factors, some influenced by genetics and others influenced by care.

A guinea pig typically costs somewhere between 10 and 40 dollars. Additionally, because they are social animals, you are going to need to buy at least two. Many pet stores and breeders will not even sell you a solo guinea pig. Because of this, you can expect to pay between 20 and 80 dollars for a pair.

On the other hand, a hamster at a pet store will usually cost somewhere between 10 and 20 dollars. Additionally, since hamsters are happy on their own, you generally will not have to buy more than one. There are some breeders that specially breed hamsters with really good genetics and may sell them for significantly more.

Guinea pigs typically keep a similar sleep pattern as you. That means they tend to be most awake and active during the day. They are often the most active in the morning and evening, taking a nap during the middle of the day.

Hamsters are nocturnal. That means they usually sleep during the day and are most active at night. Because of this, you will want to interact with your hamster most in the evening, and if you keep your hamster in your room, the constant activity and noise through the night can be frustrating.

If the noise level during nighttime is your main deciding factor, you should go with guinea pigs rather than hamsters. Guinea pigs are typically most active during the day, which means there should not be a ton of excess noises besides the occasional chewing or movement through the night. On the other hand, hamsters are nocturnal and they tend to run on their wheel, play, and eat all throughout the night, which can produce a lot of noise.

Because guinea pigs are so much bigger than hamsters, they need a significantly larger cage. Experts generally recommend somewhere between 7.5 and 10.5 square feet per guinea pig. Additionally, the more guinea pigs that you have, the more cage space you need. Guinea pigs will also need bedding, a food bowl, a water bottle, and toys.

In addition to space for the cage, you will need space to store supplies. You will need similar amounts of space for both guinea pig and hamster supplies, so your remaining consideration should be the cage space.

Guinea pigs are herbivores. That means their diet is made up of entirely plant foods. You can get some pellets to feed your guinea pig, or you can feed your guinea pig a mixture of hay, grass, and green vegetables. You will also notice that your guinea pig may eat his own droppings. This is actually good for them as it contains specific vitamins and nutrients that they need.

Hamsters are omnivores. That means that they eat both plants/vegetation and animal protein sources. You can use pellet food to give your hamster the nutrients that he needs, or you can make your own mix. The problem with a mix – whether you make it or buy it – is that hamsters will often pick through it and eat only their favorite pieces, causing them to miss out on lots of key nutrients.

Takeaway Point: Both Guinea Pigs and Hamsters Have Simple diets.

Guinea pigs and hamsters have different nutritional requirements. There will be a difference in how much you feed a hamster and a guinea pig though. Dwarf hamsters tend to eat about one teaspoon of food a day, and Syrian hamsters tend to eat about two teaspoons of food. Guinea pigs need about a cup of food a day and will usually do best if at least some fresh vegetables are mixed in.

Overall, guinea pigs are pretty easy to take care of and do not typically have any major health issues. However, they may develop a few different health problems, such as digestive tract problems and infections. If your guinea pig starts to show concerning symptoms, you should take him to your local vet.

Hamsters have a few more health issues that you should be on the lookout for. They are susceptible to digestive problems, skin diseases, teeth issues, respiratory infections, and tumors. Hamsters are also known to catch colds, just like humans. The good news is most of these conditions are entirely treatable, especially if caught early, so if you start to notice any symptoms, you should take your hamster to the vet immediately.

9. Geographical Differences: Guinea Pigs Are from The Andes, Hamsters Come From Asia and Europe

Guinea pigs were originally wild animals native to South America. They were then domesticated as pets and were also used as food in many parts of the world. However, today there are no longer any guinea pigs in the wild, so you cannot just go out and catch one even if you are in South America.

Hamsters do still live in the wild. In fact, there are almost eighteen different wild hamster species, though, unfortunately, many of them are on the endangered list. You can find these different hamster species in many places across the globe. Wild hamsters can be found in China, Greece, Romania, Belgium, Syria, and other countries across Europe and Asia. However, you will not find any wild hamsters in North America, and they should not be released into the wild.

Which One Is The Right Pet For Me and My Family?

Now that you have a better understanding of the differences between guinea pigs and hamsters you are better able to decide which of the two is the right pet for you. You now know the main differences in terms of character, habits, trainability, diet, and interaction.

If you have a busier schedule, hamsters are likely going to make a better pet for you than guinea pigs, but they still require plenty of time and attention. In the grand scheme of pets, both guinea pigs and hamsters are relatively low maintenance, but you still need time to devote to their care.

FAQ About Guinea Pigs VS Hamsters

In this final section, we are going to answer some of the questions that people often ask when considering getting a hamster or a guinea pig. With this final bit of information, you should be able to make an informed decision about whether you want to get a guinea pig or a hamster.

Which One Between The Two Is Best For A Child?

Both guinea pigs and hamsters can be great pets for kids. They are small, fun, and relatively low maintenance. Overall, guinea pigs tend to be better for children than hamsters. They are bigger, which means they are less vulnerable and fragile. They also tend to have better temperaments for children as they pretty much never bite or get aggressive.

They also are less likely to mistake a tiny finger for food since they are herbivores. Hamsters usually do fine being handled, but when they are startled or scared, they can bite, which may be scary for young children.

Finally, guinea pigs are fairly low maintenance, so with supervision, many different ages could successfully care for a guinea pig. This does not mean a hamster makes a bad pet for children, guinea pigs just tend to be a little better.

Do Guinea Pigs And Hamsters Bite?

Hamsters are more likely to bite, especially at the start. They also only typically bite when they are feeling threatened or scared, but they tend to feel threatened or scared more often than guinea pigs. If you wake a hamster up, accidentally sneak up on it, or do anything else that slightly spooks it, the hamster may feel defensive and bite at you. However, with time hamsters can bond with certain humans and therefore become less likely to bite.

Can You Pet a Guinea Pig And a Hamster In The Same Cage?

No, you should not put a guinea pig and a hamster in the same cage. First of all, guinea pigs are significantly larger and may accidentally end up hurting your hamster. However, the big concern is that hamsters tend to get very territorial and aggressive about their space and may end up starting a fight with or attacking your guinea pig. The environment would not be safe for your guinea pig or your hamster.