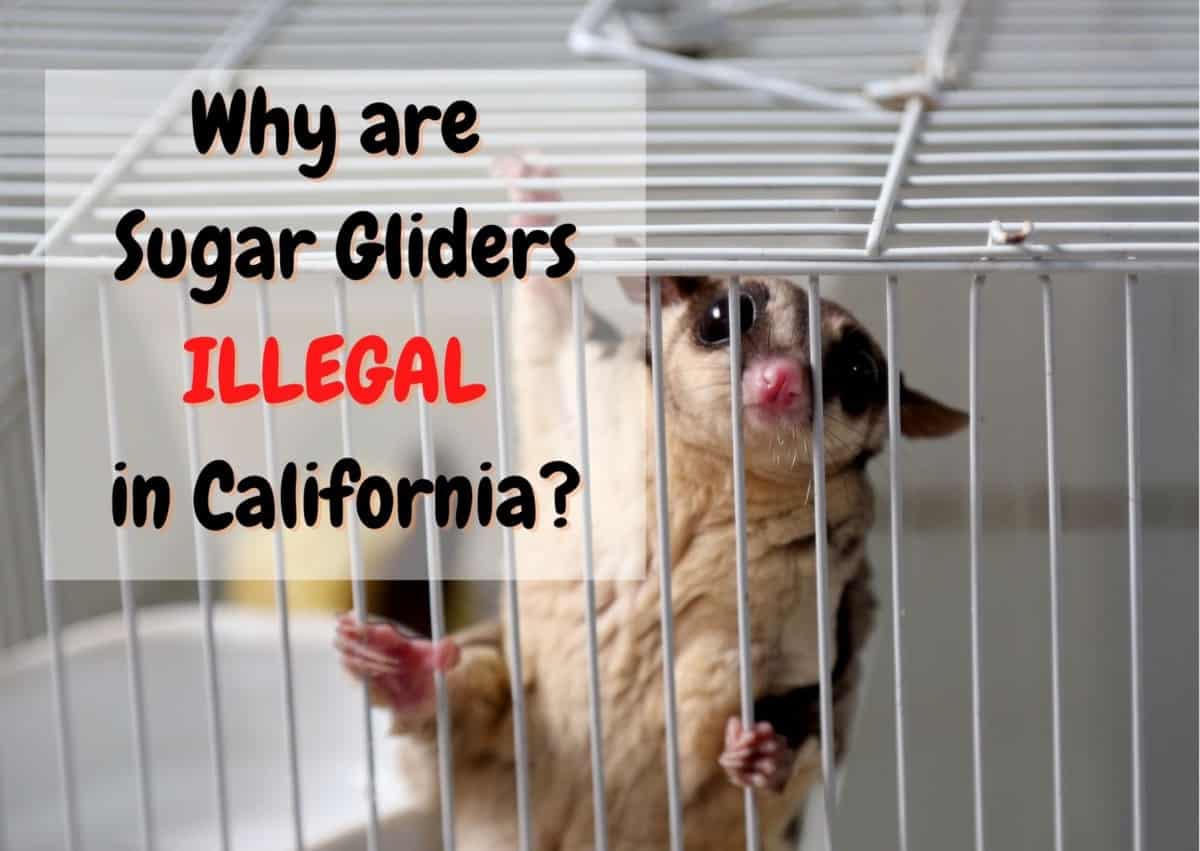 Sugar gliders, with their sweet faces and curious nature, are becoming more and more popular as exotic pets in the USA. Native to the rainforests of Indonesia and Australia, they have been bred as domestic pets for more than a decade. So why are sugar gliders illegal in California and other parts of the country?

Sugar Gliders are illegal in California in order to protect the delicate environmental equilibrium of the state. According to the California Department of Fish and Wildlife’s website, many exotic animals are prohibited as pets because they are not native to the state or USA, and the introduction of such foreign animals may threaten the native wildlife and crops.

The Reason Why Sugar Gliders Are Illegal In California

California is known for having particularly strict laws surrounding exotic pets, and a lot of people disagree with sugar gliders being on the list of banned animals. However, it’s important to remember that these laws are in place to protect

Where else are sugar gliders illegal in the US?

It’s not only California that prohibits owning a sugar glider as a pet. Hawaii, Alaska, and Pennsylvania have all banned sugar gliders, as well as some cities, including New York City and St. Paul’s, MN. You can find out here exactly where sugar gliders are illegal in the US.

What other animals are illegal in California?

Along with sugar gliders, the following animals are prohibited or restricted as pets in the state of California:

The list goes on. You can find a more detailed and definitive outline of which exotic animals are banned at the Legal and Historical Animal Center’s website.

Are all exotic animals illegal in California?

Fortunately, not all exotic animals are illegal in California. Although It might be wiser at this stage to ask yourself which exotic animals are legal as pets in the state of California, as the list seems to be shorter than those that are banned, The following is a list of just some of the exotic animals you can introduce into your family:

When choosing any pet, it’s advisable to make sure you’re legally allowed to own it. Just because it’s for sale, doesn’t necessarily mean that the vendor is adhering to state or federal law.

That being said, there are plenty of exotic animals that can make great additions to your family, and you shouldn’t be put off looking into becoming the owner of an exotic pet.

What happens if I buy a sugar glider (or another illegal exotic pet?)

It’s always advisable to check with your local authority first before buying or adopting any exotic animal. However, if you do find yourself in possession of an illegal exotic pet, you risk:

Penalties will depend on the species of animal you own, and the condition of the pet at the time of seizure.

For example, it’s very unlikely that you will face criminal charges for having a sugar glider or hedgehog, and in most cases, the animal will be rehabilitated in another state, sent to an animal shelter or refuge, or donated to a zoo.

However, you will likely encounter harsher punishment for keeping venomous or particularly dangerous, such as a poisonous snake or crocodile.

Are the laws going to change any time soon?

The laws surrounding owning exotic animals have long been contested by many people and groups across the USA. For example, this petition in California is calling for the ban on ferrets to be lifted and has so far gained tens of thousands of signatures.

There are similar gatherings of support for a lot of the animals restricted or banned in California, but certain species tend to get more attention than others. The prohibition of owning sugar gliders, for example, has baffled Californians for a long time; whereas not many people look to be trying to lift the ban on crocodiles.