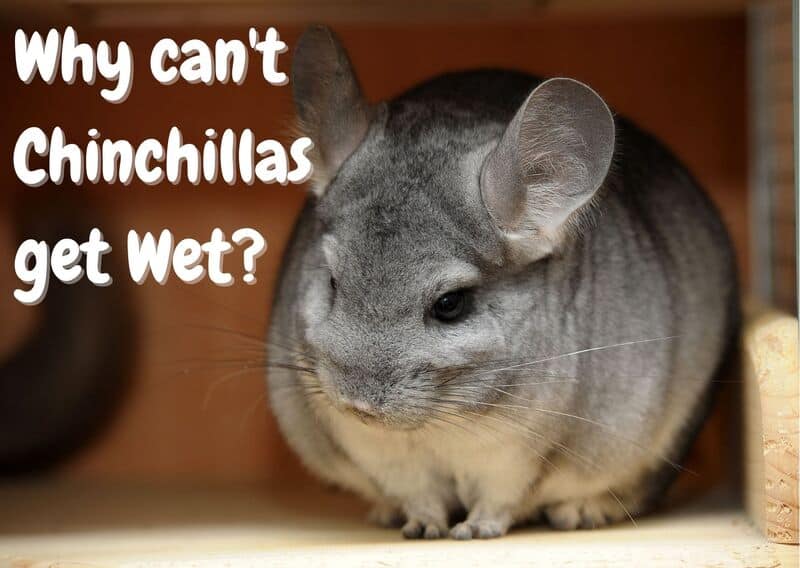 Many new chinchillas owners ask themselves, “Why can’t chinchillas get wet?” The answer is quite simple.

You shouldn’t allow chinchillas to get wet as their fur is so thick it takes them too long to get dry and they might get sick as a result.

However, chinchillas can be tolerant of water in many cases as you will soon find out.

The Reason Why Chinchillas Can’t Get Wet

The reason why it is not advisable for chinchillas to get wet is that their hair is incredibly thick, making it very difficult to dry. This could then lead to the development of fungus and other bacteria if they are not dried up straight away, which could in extreme cases lead to death.

To give you an idea of how thick chinchilla fur is, they simply have one of the highest fur densities in the animal kingdom, with more than 20,000 hairs per square centimeter. Compare this to the average human hair density of 120 hairs per square centimeter, you now understand why it will take a tremendous amount of time for the hair to dry if there is no direct sunlight, as is often the case in captivity.

The first thing you need to do is fish them out of the water. Get them on a dry fluffy towel to soak up the majority of the water. The next step is to have new towels on hand to help speed up the drying process.

How long they happen to have been in water will determine how long it takes to get them dry. General fluffing of their fur with heavily soaked areas doesn’t take very long to get dry using this technique.

What if it gets wet a little bit on its body?

Perhaps your chinchilla is a bit sloppy using the water bottle and gets wet over the whole front of its chest. Well, you just need to have nice absorbent paper towels handy to help soak up the water. These will work quickly to keep the water from getting deeper into the fur.

If the fur starts to get clumpy from being soaked, these areas need to be pressed with absorbent material to dry it faster. If you need to, a wide-tooth comb can help get air in between the matted fur. Working back and forth with gentle care will help circulate air into these problem areas.

Can water kill a chinchilla?

Direct contact with water does not kill a chinchilla unless they drown or cannot swim to safety. Water is not something that will cause your chinchilla to become ill. The contributions that will end up killing a chinchilla are likely health complications.

Chinchillas are finicky animals that do suffer from the psychological effects of certain things. Falling in water is not going to cause your chinchilla long-term depression. They will be upset about as long as it takes for them to get dry and will probably avoid what caused the accident in the first place.

Do chinchillas ever get wet in the wild?

In the wild, chinchillas live in a very dry climate, however, they do occasionally get wet in nature. How they deal with this is just like any other animal with thick dense fur.

Rainfall in the Andes

The average annual rainfall in the Andes is a lot more than you might expect. The amount of rain this mountain region gets is at least 41.8 inches per year. This is not much but it does show you that their native soil does get soaked from time to time.

If this were such a devastating problem for the health of chinchillas living there, they would cease to exist. The belief that chinchillas cannot get wet at all comes from previous chinchilla owners that didn’t understand how to properly care for a chinchilla.

What about snow and winter weather?

Chinchillas have been known to run around in the snow if they come out from their burrows. But most people often forget that the Andes Mountains are pretty high up. These peaks can reach 16,000 feet above sea level, and the average temperature is 23 degrees Fahrenheit.

This gives you an idea of why chinchillas have such thick and furry coats. Temperatures above 75 degrees Fahrenheit promote mold and fungus. If they get wet in a warmer environment it leads to a temperature and humidity difference that is dangerous to their health.

How do chinchillas clean themselves then?

A chinchilla will have an instinctive need to have a dust bath since this is fast and effective. As their fur is too dense to groom easily, the ashy powder found in the Andes Mountains makes an ideal way to clean off their fur. The powder helps soak up excess water and can be shaken off easily.

For the average chinchilla raised in captivity, they are doing this to control skin oil build-up. A major difference is daily diet intake and the average temperatures they are raised within. A comfortable room temperature of 72 degrees Fahrenheit is fine for a chinchilla. Anything higher and they will produce more oil from their skin. This will automatically require a dust bath more often to keep their fur clean.

Your chinchilla likes to take a dust bath to control the oil on the surface of its skin. The volcanic ash that is used for a dust bath soaks up the oil and is shaken off after frolicking around several times. They will shake off clumps of ash that have soaked up the skin oils making their fur feel softer and cleaner. They will be happy to take a dust bath at least twice a week depending on the weather and temperature.

A good way to make sure your chinchilla stays clean at all times is by grooming them on a regular basis. Chinchillas enjoy being groomed and it’s a good time to check that their fur is healthy and not matted. You may also have a look at their nails and teeth to avoid any long-term complications.