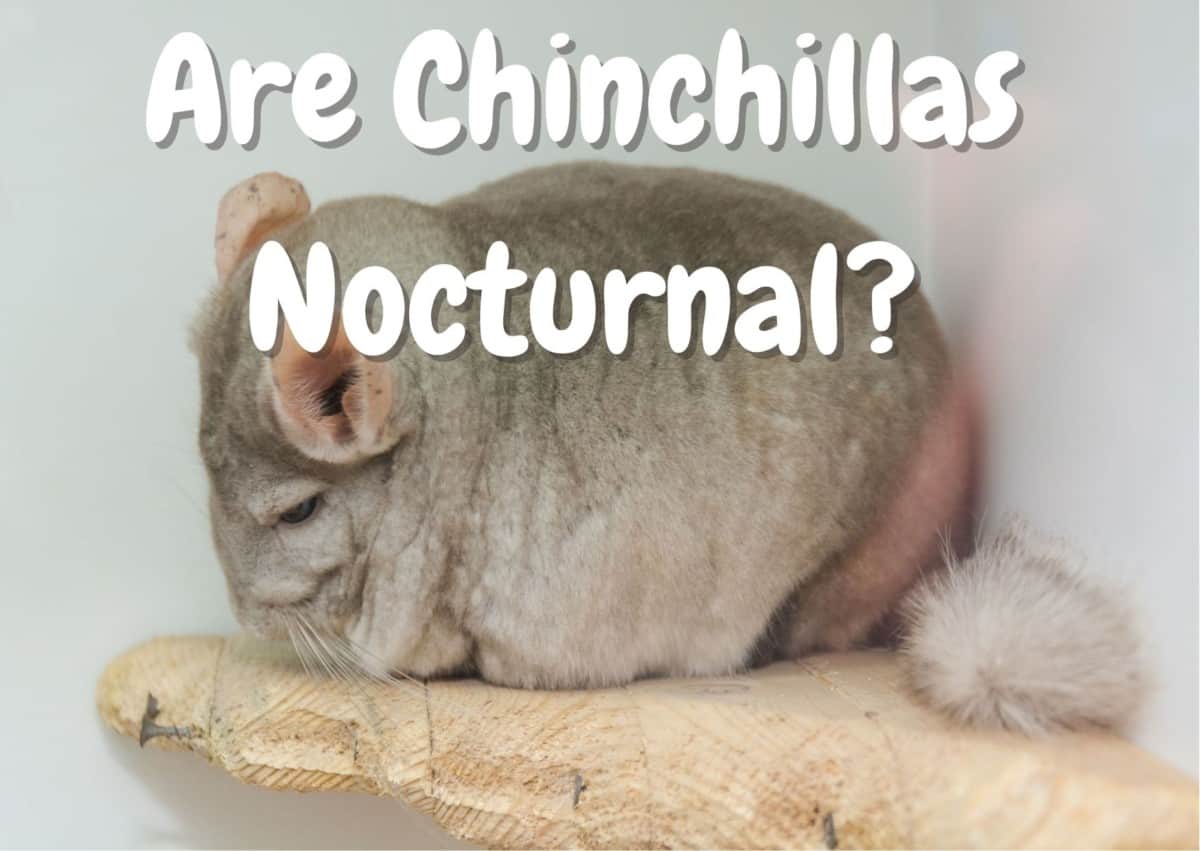 Chinchillas are mostly active at night even though they are not technically nocturnal. They are actually crepuscular instead since they wake up at dusk when the sun is still going down. Nocturnal animals only wake up after the sun is down and are only active when there is no light present.

This is a nice aspect if you have a job that you work during the day and get home to find they are just waking up. But keep in mind that they will be awake for most of the night after that. This is why they will need to be kept in a room that will be quiet enough for them to sleep.

Just like every other pet that is awake for most of the night, they need enough interaction from you to get exercise. Aside from the food that they will eat, they need plenty of items within the cage that keep them busy. These should include an exercise wheel and plenty of chew toys. Since you can’t let them roam around all night, these will keep them mentally and physically busy. These activities will allow them to be happy until they go back to sleep in the morning.

What is a normal chinchilla sleep schedule?

Your chinchilla is going to sleep as little as 11 hours or as many as 14 hours in a row – this all depends on how soundly they are sleeping. If they wake up during their sleeping hours, it may be from something that wakes them up, such as a loud noise.

Their sleep schedule is often during the entirety of the daylight hours. The room they sleep in should be dark and as quiet as possible. If you disturb them, this can disrupt that sleep pattern and this makes them stressed.

The temperature will also determine how long they sleep. If the level of comfort is not right, they won’t sleep the entire length of time and will be cranky as a result. Chinchillas don’t like to be too cold or too hot while they are sleeping.

Where you place your cage is also going to be critical, and it is not always a good idea to keep them in your bedroom. Any noise you make in the daytime will wake them up and make it harder for them to go back to sleep. Try finding a room where they can sleep without being disturbed in any way.

Where do chinchillas normally sleep?

Chinchillas are not difficult when it comes to choosing a place to sleep. They might prefer to sleep inside some kind of shelter to make sure natural light does not disrupt their sleeping pattern, but if the room is dark enough they might choose any of the following spots inside the cage.

Inside the cage, they will often have a little hut that looks like a little house or shack. They can retreat to these tiny hideouts to curl up and go to sleep. This is a fun sight to see them squeeze into a hut where they sleep for a little bit.

Hammocks are the most comfortable spots to see a chinchilla stretching out and snoozing. They are ideal because they are hanging from the roof of their cage and can hold more than one chinchilla at a time. Some hammocks have several pockets that a chinchilla will find comfort sleeping inside.

If your chinchilla does not have a little hut, it can be a chinchilla house that has enough room for more than one pet. These are for cages that are larger and provide sleeping nooks that are fine for multi chinchilla families. A chinchilla house is usually more geared toward keeping them busy but it makes a good spot to snooze.

4. Anywhere else inside their cage

There’s no telling where your chinchilla wants to take a nap since it is common they will get tired from playing around. If they feel comfortable enough, they will find spots where you might never expect them to fall asleep. Even if it’s right on something they are playing on, this can double as a spot where they will sleep too.

How can I make sure my chinchilla gets enough sleep?

If you find your chinchilla has a hard time getting asleep, check for these five factors that are important for a balanced sleep pattern.

What normal positions do chinchillas normally sleep in?

Your chinchilla is an interesting creature to watch, even when they are sleeping. Below is a list of all the safe positions your chinchilla may adopt when he is sleeping.

Your chinchilla will sometimes sleep while standing on all four legs. It can be strange to see them sleeping like this, but animals like horses and mules will sleep like this as well. Don’t be alarmed if they just look as if they are standing motionless for a long time.

This is how we like to see a chinchilla sleeping since they look so cute. They will be curled into a little ball inside their hut or on a hammock. If they are especially tired after exercising, they might even curl up and fall asleep right on the spot.

This can happen if the temperature is higher than usual. If they are overly tired or have eaten too much, this position might suit them better. For females, it can be that they are pregnant and that position is more comfortable for their belly.

This is one of the more shocking positions that you can see is your chinchilla laying on its back with its legs in the air. Some owners might be worried since they don’t see them breathing, but in fact, chinchillas are such deep sleepers that their breathing slows down to the point of looking dead.

At some point, you will see your chinchilla in crazy positions, looking more like the coyote in the roadrunner cartoons. If you have a camera that makes very little noise, you’ll want to capture these moments.

6. With their ears drooped

It is a bit strange to hear your chinchilla barking while they are asleep, but it happens. The reason is just like any other animal that is sleeping. All animals can dream, which is why they may be making noise.

All body functions are going to continue when chinchillas are sleeping. If they are grinding their teeth it will be a nervous reaction to dreaming that can form into a constant habit. Since most chinchillas are continually chewing while they are awake, this will continue if they are dreaming of eating.

These won’t be long cries of pain that are coming from your chin. A sleeping chinchilla is going through different stages of sleep into a deep sleep. Once they start dreaming, anything can happen including making light crying sounds. Often enough, your chinchilla might wake up as a result of sensing danger.

Don’t be worried about twitching movements since these are triggered by muscle spasms. It can happen if a chinchilla is dreaming, but not always. Twitching is a completely natural effect that will happen from sleeping in odd positions.

What are some good chinchilla sleep accessories?

These are good if they are made from fleece material, and they give your chinchilla a place where they feel safe. Hammocks allow single or several chins to get together and rest. They are better to use since there is no thread that can be harmful to them to chew. Here is a good example of a safe chinchilla hammock.

Soft beds are a good option if they like to rest inside these half-clamshell nests. There are plenty of beds that you can choose from, and most of these are made from fleece.

Many of the huts and houses are great for chinchillas to hide and play in addition to being a cool place to take a nap. If your chinchilla is taking up residence in a hut, they must be feeling secure enough to sleep there all day long. If they get too hot, they’ll come out and find a cool spot to lay down and sleep after that.

Can you change a chinchilla’s sleep pattern?

When you care for your chinchilla, there are just some things that you don’t want to change. Your chinchilla is naturally used to being awake at night. The only thing that you can do is to work around their sleep schedule.

Chinchilla owners that tried to change their sleeping schedule find that it’s not profitable – many chinchillas suffer from the stress of having their sleeping habits altered. They have an internal alarm clock that is genetic by nature.

About the only thing that you can do is try to simulate dust to dawn conditions using light timers. You might try feeding them when they first wake up. If they hear their food being brought in at earlier wake-up times, this might help.

Why is my chinchilla sleeping with its eyes open?

It can be worrying to see your chinchilla sleep with its eyes open. They won’t always do this but from time to time, if they’re napping, they can stand still with their eyes open for short periods. This means they are snoozing but still have cognitive functions like hearing and seeing. Sudden noises will snap them awake almost instantly.

They will sleep with their eyes closed if the conditions are right, but there will be periods when they keep their eyes open. This might be from being nervous about something, as chinchillas are known for being twitchy.

Why is my chinchilla sleeping all the time?

Having a chinchilla that is especially lethargic might be a sign that they are bored or not interested in doing anything. However, this is sometimes a sign that they have an imbalance in their diet.

You should start worrying and bring it to the vet if you start seeing they are not eating or drinking water. Sleeping and lazy activity during the day is common for chinchillas in general. Be very careful about the room temperature, as this can be one of the reasons they are not being active.

As a chinchilla owner, you need to engage them in being active if they are just being lazy. Reduce their snack intake by limiting natural sugar goodies too. They need to be active enough so they don’t gain weight, which will help them to stay mentally and physically fit.