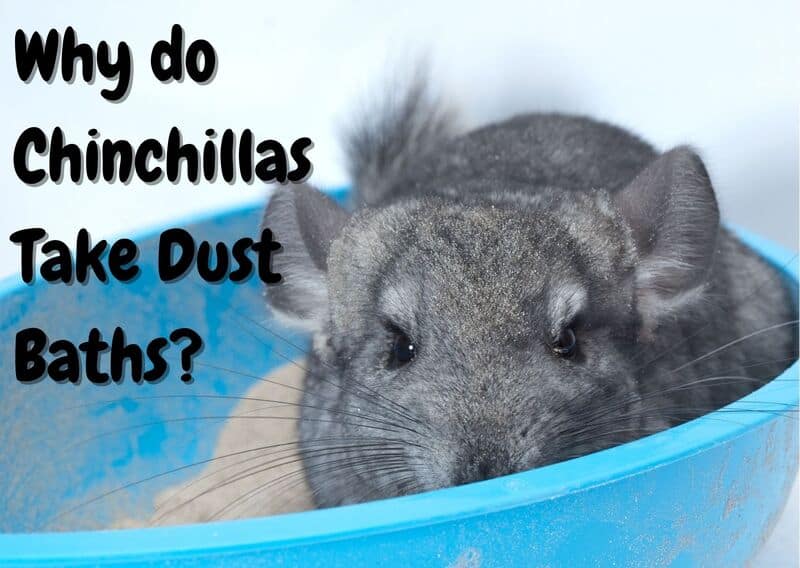 If you are thinking of getting a chinchilla as part of your family, you might wonder “Why do chinchillas take dust baths?” The reason is simple, as you will soon find out.

Chinchillas take dust baths not only to promote a clean and healthy coat of fur but also to help absorb excess oils.

Your chinchilla will instinctively need to do this and this guide will explain in detail the dos and don’ts of a chinchilla’s dust bath requirements.

Why Do Chinchillas Need To Take Dust Baths?

Chinchillas have naturally oily skin because of the density of their fur. They have an incredible number of 50-70 hairs per follicle, making it harder to release oil into their fur. Through centuries of living in a dry mountainous country, they have learned that dust baths help take away excess oil.

We all know the feeling of having oily hair and it’s easy for us to wash out our hair of these excess oils. That feeling of freshness is exactly what a dust bath does for chinchillas. You will see that their playful motions are not just for happiness, but the relief of getting rid of their oily skin.

What Exactly is a Chinchilla Dust Bath?

Since chinchillas do not take water baths due to the density of their fur, they take dust baths instead to clean themselves. This process of rolling in the dust for a few seconds is referred to as taking a “dust bath”. It is faster for chinchillas and allows their fur to remain free from dirt and oil that get on their fur.

If you have never seen them do this in person, they all follow an instinctive pattern that every chinchilla does. Since they originate from the arid mountain range of northern Chile, this is the only method they have developed to keep clean.

What is the Dust Made Of?

The dust is actually volcanic ash that is a mixture of fine pumice that is ejected from a volcano. Not every volcano produces this kind of ash, so commercial chinchilla dust is not actual dust from a volcano. Because volcanic ash is so fine, it penetrates into their thick hair and soaks up oil that’s stuck to hair follicles.

What Do Chinchillas Do When Taking a Dust Bath?

Through several thousands of years of their natural cleaning habits, your chinchilla already knows how to roll around in their dust bath. They follow a ritual that is often comical to those who have never seen it happen before. It never gets old watching them go through their motions.

How often does a chinchilla need to have a dust bath?

Chinchillas will have a dust bath every couple of days or more, depending on if their fur is oilier or not. In the summer when it’s warmer, your chinchilla is more likely to need frequent dust baths. The limit is usually once or twice a week but not always the case for chinchillas that are extra oily.

Over a day or two, this dust will come off as they shake and move around. This is barely noticeable since this dust being shaken off will be so fine. The oil that has soaked into this dust simply falls away leaving your chinchilla soft and continually fluffy.

How often your chinchilla will have a dust bath also comes down to diet, so the food that you feed them that has higher fat does have an impact. Age can be a factor in some cases. Chinchillas process their food depending on their exact diets, so not every pet will have the same oil production. So while dust baths should be part of its care routine, you also need to limit a dust bath to 3 times a week so you don’t cause dry skin issues too.

Should my chinchilla take dust baths in his cage?

You may wonder if a dust bowl should be part of your chinchilla’s cage setup. We don’t recommend putting a dust bath inside the chinchilla cage for two main reasons.

The first has to do with keeping their hay from getting covered with dust. Some owners like to have a plastic container or a simple wooden box outside the cage. There are even special dust bath containers that are rounded so your chinchilla can flip over easier.

The second reason is that they learn that a dust bath happens outside their cage, so they will be excited to come out of their cage. It is good for exercise and you can let them scamper around. This is a also perfect reason to socialize with your chinchilla.

Where do you buy the dust bath powder?

Some brands are commercially available that are worth buying for your chinchilla. I’m not against big-name brands and I’m also not afraid to mention products that are made from quality materials. But the best chinchilla dust is from soft fine volcanic ash and can be sourced from several online sources.

Some shops are selling high-priced dust mixtures that have all sorts of gimmicky mixes. All you really need is good quality volcanic pumice that comes from a qualified source.

Can you make your own dust powder?

In terms of cost-effective savings, you can easily buy these two materials online at a fraction of the cost of pre-made chinchilla dust. It’s really just an option if you want to provide dust that doesn’t have padded pricing. There are also plenty of DIY videos that tell you how to make the best chinchilla dust bath formula.

As far as pre-made products, you can find many of them that all promise better skin, just be sure to check the product reviews to see what it does for their pet.

Can you reuse chinchilla dust?

To an extent, you can reuse the dust that your chinchilla is rolling around in. Sooner or later, that dust is going to need cleaning, sifting, or being thrown out. There is only so much ash that absorbs effectively before it gets clumpy. If you make your own dust bath mixture, the outgoing cost is next to nothing. Being able to reuse your dust also depends on how often they are having their dust bath.

Another thing about using any dust is keeping it inside a container that can be resealed. Ash is very moisture sensitive and can soak up moisture if you leave it out. Put it inside Ziplock bags or plastic containers that have a sealing top.

How long can a chinchilla go without a dust bath?

The longest is once a week but if you go over that, their fur can start getting oily and matted, which will require extra grooming. The problems only start when you give them dust baths more often than they actually need.

Some owners argue that a chinchilla does not need a dust bath that often, but this can be from those who have dust allergies. I suspect that their chinchillas also have vitamin supplements, so be sure to give your chinchilla a dusting once a week.

Do baby chinchillas need a dust bath too?

From the first time that you get your chinchilla at home when they’re around 10 or 12 weeks old, they will be happy to try the dust bath. They naturally understand what it is for because it is an instinctual behavior. Place them into a dust bath and they will be excited to frolic around in their dust box until they have had enough.

They won’t need to have a bath more than twice a week, so only once a week is perfect for them. Most young chinchillas will need to be removed from their dust box so they don’t dry out after 15 minutes. You have to be careful of their paws and skin getting too dry from the ash. A good general dusting is nice for a few minutes, but they won’t know this at first and want to play longer.

How do chinchillas take dust baths in the wild?

If you can travel to the mountain slopes of the Andes and northern Chile, you will have a chance to see them take dust baths. They find that the natural volcanic pumice is the best material to clean their extra-plush fur. Since these mountain ranges are covered with much of this ash, they rub around in piles of this pumice whenever they want. There is no scientific proof they do this more than a couple of times a week, yet in the wild, they do have limits.

Why can you not get a chinchilla wet?

This simple answer is their fur is so dense, that it just doesn’t dry very easily. It’s also a problem that will cause more harm to them if they do get wet. They don’t respond well to being wet and will have negative physical effects that result in emotional trauma. They are very fragile to subtle changes around them and getting wet could trigger all sorts of issues.

This can lead to fur slippage, bald spots, and excessive shedding, making your chinchilla look unhealthy. It might sound excessive, but chinchillas are better off staying away from water as much as possible. It’s just not part of the weather pattern of their natural environment.