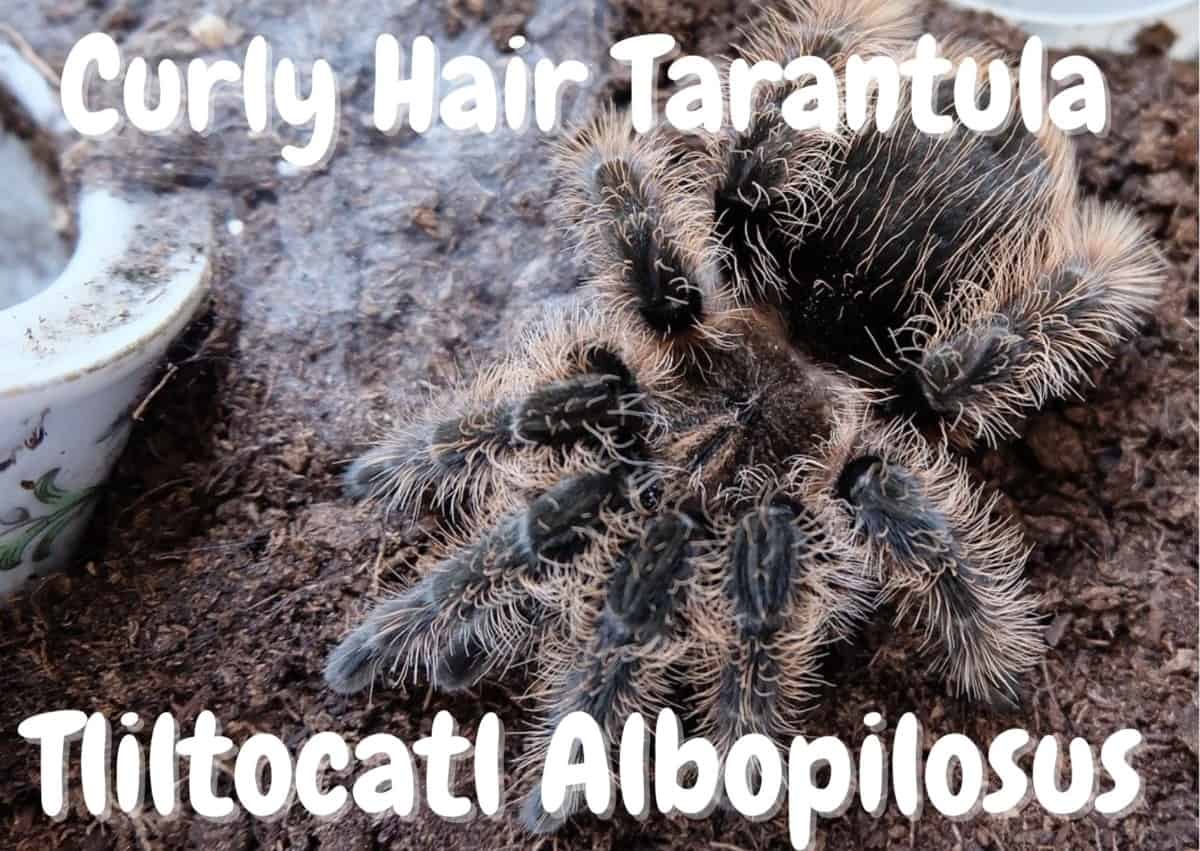 The Curly Hair Tarantula is very popular due to its gently giant nature. They make great school pets and are wildly popular for being so hairy-looking.

This spider used to hunt the jungles over in Honduras, but now they can be found just about everywhere in the world. Enthusiasts love them since they make great pets that can be handled easily. Are you looking to have your own too? Find out what it takes to raise them yourself.

Characteristics of the Curly Hair Tarantula

Overall this is not a colorful spider, to say the least, and has no prominent markings either. It appears as a chocolate-brownish or black body. Around the lining edge of the Cephalothorax below the eyes and along the Chelicerae, there is a light or dark ring. It can be colored rustic-orange to tan with darker rim edges also.

Above the carapace is sometimes a triangle-shaped pattern that can have solid or striped lines radiating within it. The most obvious characteristic is the presence of long curly blond hairs that cover their abdomen and legs. They will often appear to be stiff prickly type hairs but are quite soft to the touch.

The 1st instars are curious slings as they appear with wonderfully large abdomens that resemble shiny green grapes. By their second molt, the 2nd instars will develop a large black spot on their abdomens. By their 3rd molt, they will look more like mature adults with spikier-looking legs.

The little ones when you buy them after their 3rd molt will measure a ¼ inch at most – sometimes even smaller than that when they are in their first and second stage instar stage. In the first year, they can reach 1 inch in length, and 3 inches (7.5cm +) by the 3rd year. As mature adults, the female can reach an impressive 6 inches in length (16.51cm). Males do tend to be smaller in body size, yet retain longer legs as a result.

This is a rather hearty species that will do very well if taken care of properly. A female can last 20-25 years, while males can typically live up to 5 years only.

Experts will agree this is a great beginner tarantula. It has the most docile temperaments of all the tarantulas and is very easy-going. Taking care of this spider will be problem-free if you keep in mind this is still a spider that can be upset.

Starting with a smaller spider of an inch will be pretty easy since they need a small plastic container with holes poked in the top. A large take-out soup container is suitable for some substrate at the bottom. As they grow you will need to make appropriate upgrades until you need an enclosure.

By their third year, you will graduate to a 5-gallon tank. It can be any of the spider enclosure styles however this tank should have adequate ventilation due to the temperature these spiders thrive in.

This curly hair spider isn’t an escaper artist but you should still have a lockable lid. It can be plastic or glass however we recommend glass since it doesn’t scratch as easily over the years.

You will find that with any kind of damp environment, the substrate will need closer attention when it comes to cleaning. It needs changing at least once a month to prevent bacteria, mold growth, or possible outbreaks of mites. This, in turn, will keep your enclosure free from problems over time.

This species is a fan of roaming at night so the enclosure can include interesting items. It’s more for them to navigate and climb over than anything else.

They are a terrestrial species that will spend much time in the day in their burrow. If you include a half-shelled coconut or some fake rocks, these are fine. Don’t include items that they can climb onto and fall from the top of the enclosure. These might be damaging to your curly hair.

The big three all need to combine forces to create a climate that your spider is used to. These tarantulas come from Honduras, where temperatures are much higher. On average they will be content with 70-85F temperatures. These hairy spiders will like 65-70% humidity which won’t be too hard to maintain.

Spraying the tank once a week is all that is needed to keep the level balanced. The substrate will need to be moist toward the bottom of the tank at all times. Use a 30-watt incandescent bulb to regulate the additional heat they get. No more than 12 hours of light at a time will simulate daylight hours for them. If you live in a region that is cooler than 70F in the summer, you can add a heating pad under the tank to make up for cooler environments.

These spiders will need a substrate made for burrowing, so the mixture needs to be the right kind. Use this formula that is perfect for them: two parts of coconut fiber mixed with peat moss, and two parts of topsoil and vermiculite. Combine the coconut and moss with the soil and place it into an oven so it can then be sterilized.

Whatever bacteria is living in that soil, moss and fiber needs to be cooked at 150F for no less than an hour and allowed to cool off for a full day. You can then mix in the vermiculite and add it to the tank.

Small slings need just a depth of one inch whereas mature spiders need up to 5 inches. Spray the substrate generously and let it sit for a week before putting your spider inside. This will allow the topsoil to be much drier than underneath. Once you see it’s 50/50, it’s ready.

Beginning with the slings, they will eat headless crickets, mealworms, and wingless fruit flies. As these spiders get bigger, they will eat crickets, large insects, dubia roaches, and even pinky mice followed later by fuzzy mice on occasion.

How often do they need feeding?

This species is often a real glutton. Little ones eat twice or more a week and older tarantulas will eat every week. An adult will accept 3-4 crickets per week. If they are finished feeding, the prey needs to be removed at once from the tank. Only give your spider insect that is professionally cultivated to ensure they have no parasites or mites attached to them.

These spiders do need a water dish and it also needs to be based on their size. A small spider will need an aspirin cap, while three-year-olds will like a Snapple cap. Adults can use a jelly jar lid. These need to be flush with the substrate. Curly Hair Tarantulas like to fill their water with the substrate for some reason, so it should be cleaned and refreshed daily.

This is one of the most laid-back of all the big spiders for all levels of enthusiasts. They just don’t seem to be bothered when they are handled by people and they rarely bite or flick their urticating hairs. However, they can and will if they have a reason to be spooked, but for the most part, they are very docile.

The bite is not dangerous except if you’re allergic to their venom. It will be like a bee sting for most people. Be kind to them and they will tolerate you in return.

There are health concerns you need to be aware of before owning a curly hair tarantula. They can become dehydrated if they don’t have drinking water, but will often stop eating if they are about to molt. This is a yearly process after the first year, so look for signs that they will molt. If they are sluggish and not receptive to their food, leave them alone.

If they flip over and look dead, give the tank a good spray to increase the humidity – just not directly on them, off to one side opposite to where they are laying. It will help them escape from their tight exoskeleton easier.

If you have followed the rules for cooking out the substrate, then mites and other things will not affect your spider. Mites are terrible at infestations and can eventually kill your spider. A clean substrate is always a smart idea from the very start of owning these spiders.

These are very common spiders to buy at pet stores and exotic pet stores. In the wild, they are rarely caught anymore. They breed exceptionally well. So much that collectors will often give away to other avid fans for free.

On average, look to see prices of 5 dollars for slings under inches. A 2-inch spider will be around 15 dollars. Get to be friends with your exotic spider dealer and they might just add a freebie sling.