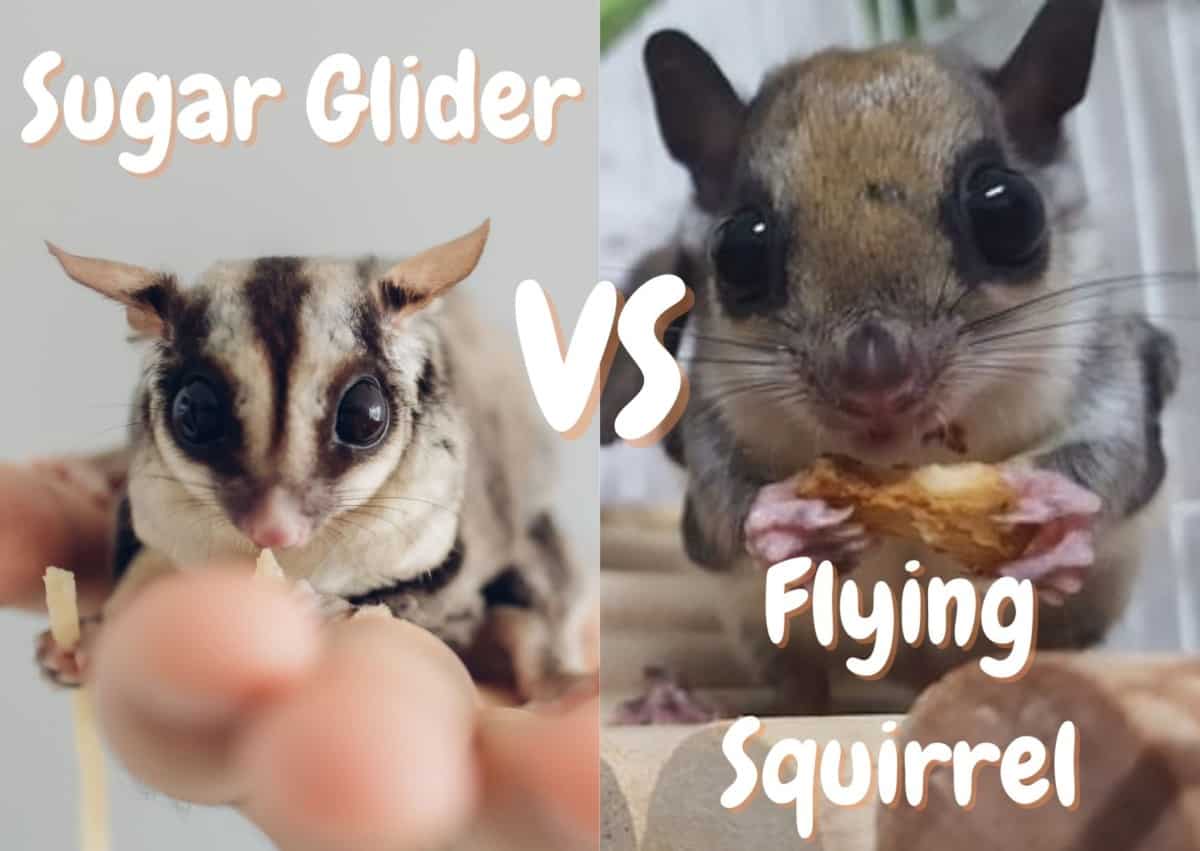 Can you spot the differences between the two critters above? The one on the left is a sugar glider while the one on the right is a flying squirrel. What are the main differences and which one makes the best pet? This article will help you get the answer to these questions.

To start with, here are summarized in a chart the main differences between a sugar glider and a flying squirrel.

Telling the difference between a sugar glider and a flying squirrel can be quite challenging, so in this post, we have listed all the differences between the two species.

Although a sugar glider and a flying squirrel can look very similar physically, that is generally where the similarities end between these two creatures. They are different in almost every other defining characteristic.

Sugar glider VS flying squirrel – which one makes the best pet?

Before walking into your favorite exotic pet shop, keep in mind that both sugar gliders and flying squirrels:

In regards to which of these animals makes a better pet, it depends on what you’re looking for in a pet. If you are looking for a single pet, you would be fine in obtaining a flying squirrel, as they can survive and thrive by themselves with solely human interaction in their lives.

Sugar gliders, on the other hand, oftentimes will become depressed and fail to thrive if they are the only sugar glider in your home. Sugar gliders fare best if they have at least one companion, as they are highly social animals who rely greatly upon other gliders to thrive.

Therefore, if you do not have enough room to support multiple pets, you would fare better with the squirrel. But if you are ready to welcome more than one pet in your house and have room to accommodate them, sugar gliders are a great option.

On the other hand, several species of flying squirrel are native to North America and also strive in areas including Northern Eurasia, Mexico, Central America, India, and Southeast Asia.

Both the sugar glider and the flying squirrel are nocturnal animals that are very social in nature. Both can be very affectionate animals when they are kept as pets. Generally speaking, the flying squirrel is more independent and is quite happy left alone for longer periods of time.

However, a sugar glider that is kept with no other sugar gliders will often become depressed, sometimes to the point of self-harm.

Moreover, both flying squirrels and sugar gliders go through a process of “bonding” with their owner so it is very important that they spend time with them every day, especially at the beginning. Some sugar gliders can even act jealous when they become attached to one human owner, which is quite a funny sight to behold.

A sugar glider and a flying squirrel are two completely different species and therefore could not mate and create any viable offspring together. The sugar glider is a marsupial, most comparable to a kangaroo. In fact, their offspring are known as joeys.

They are born formed, however, and they spend several weeks inside the mother’s pouch, being nursed and becoming acclimated to life in the outside world while comfortably viewing it from the safety of their mother’s pouch.

A flying squirrel is, on the other hand, a placental mammal giving birth to one live baby at a time, and upon birth, it is ready to nurse and subsist outside of its mother.

Although they will remain close as the mother raises her offspring and socializes him, the mother squirrel has no pouch and does not carry her baby the way sugar gliders do.

4. Sugar Glider VS Flying Squirrel – Differences in their chattering style

When it comes to the sounds they make, the two species have very different characteristics and identifiers. Sugar gliders are very vocal marsupials, which can come as a big surprise to first-time owners.

Flying squirrels are not vocal outside of the normal chattering that is often associated with North American squirrels.

Both animals fly using the same membrane that extends from the front to the rear leg, giving a parachute-like piece of skin the ability to carry these light animals for great distances.

This is what gives the animal the appearance of flying. However, they are merely drafting on the wind, versus actively flapping any portion of their body to cover a distance.

When it comes to keeping these animals as pets, thought should be given to their lifespan. A sugar glider has an average lifespan of 14 years, both in and out of captivity.

A captive flying squirrel can live between 6 to 12 years depending on the breed, so both make for long-term pets and should be given serious consideration before obtaining one to keep.

7. Sugar Glider VS Flying Squirrel – Availability in the USA

You should also check the local laws before the acquisition of either of these animals as a pet. It is illegal to possess flying squirrels in a large number of states and municipalities. Some places require you to hold a specific license in order to own these animals.

The requirements to own an exotic animal such as a sugar glider depend upon your state and municipality. A few states prohibit the keeping of sugar gliders as pets, such as Alaska, California, Hawaii, and Pennsylvania.

It is important that you thoroughly research the laws in your area regarding the ownership of these animals. Just because someone will sell them to you in your state of residence does not mean that they are legal to be owned in that particular state or municipality.

8. What is it like to keep them as pets?

Sugar gliders can be smelly

As far as keeping them as pets, sugar gliders have a stronger odor that can be quite bothersome to individuals sharing a living space with them. Sugar gliders make good pets outside of the fact that they have a musky smell and can’t be potty trained.

Both require a strict diet

Both the sugar glider and the flying squirrel require a diet especially sold for omnivores, as they cannot subsist on merely vegetation or grubs and mealworms. So it is very important that they are fed a balanced diet consisting of both of these sources of nutrition.

The need for a competent veterinarian

In order to ensure that you will be able to maintain a healthy animal, prior to obtaining either of these pets, it is best to ensure that there is a veterinarian in your area that specializes in treating marsupials and these types of exotic creatures.

Not all veterinarians have experience in dealing with pets of this type, and not all will be able to provide the level of care and knowledge necessary to maintain the health of your animal.