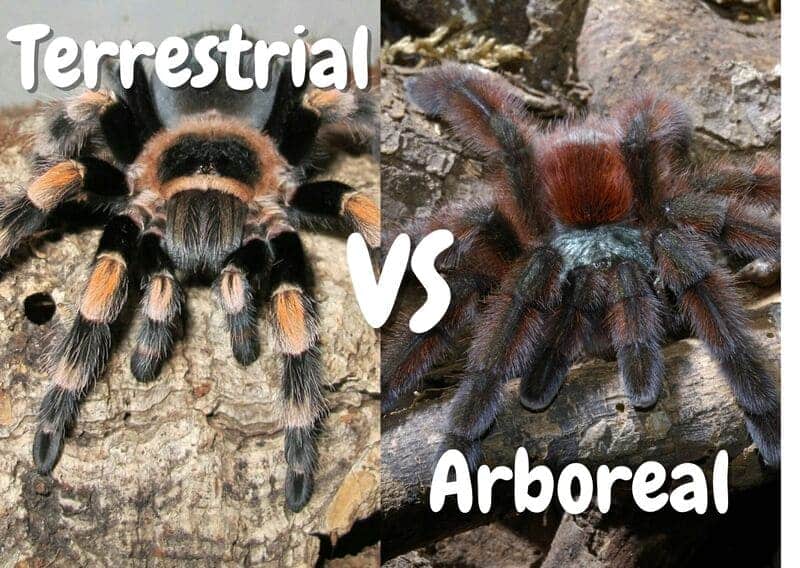 Tarantulas are fascinating spiders to have, but with close to 900 different species, it can be hard to pick which you want. What does not help is that within the tarantula realm you have several types of species: terrestrial tarantulas and arboreal tarantulas.

In this post, you will learn about the main differences between the two, along with what enclosure requirements they each have. You will also discover what are some of the best arboreal and terrestrial species to keep as a beginner.

What are the differences between terrestrial and arboreal tarantulas?

The biggest difference between terrestrial tarantulas and arboreal tarantulas is where they live and spend the majority of their time.

Terrestrial tarantulas, just like their name implies, live on or in the ground. Some live on the surface, hiding under bark or leaves, while others create burrows and actually spend a lot of their lives underground. The tarantulas that burrow in the ground are often referred to as fossorial tarantulas.

On the other hand, arboreal tarantulas tend to live off the ground in trees or other elevated structures.

When it comes to size, it really depends more on the exact species of tarantula you get rather than whether or not it is terrestrial or arboreal. Both groups of tarantulas have species that are smaller and species that grow to be huge. They are, after all, considered the biggest type of spider in the world.

Tarantulas range from 4.5 inches to 11 inches, measuring from the front right leg to the back left leg. As far as weight, they range from 1 ounce to 3 ounces. For more specifics about size, check out the section about the best terrestrial tarantulas and the best arboreal tarantulas.

On the other hand, arboreal tarantulas are usually only recommended for experienced owners. They are very delicate, especially when they are young. They also tend to be much more likely to bite when handled.

Arboreal tarantulas are typically found in more tropical areas and climates, but they can be found all around the world. There are species found around Asia, Africa, South America, Central America, and the Caribbean.

For the most part, terrestrial and arboreal tarantulas eat similar things. They both will be happy with a diet made out of most traditional feeder insects such as roaches and crickets.

However, since arboreal tarantulas can climb, they often will appreciate the extra challenge of catching some flying insects.

The big thing to keep in mind is that arboreal tarantulas should not be handled much at all.

A good rule of thumb when it comes to the size of your tarantula’s enclosure is that it should be three to four times the width and length of your tarantula with its legs fully extended. If it is a terrestrial tarantula, you are going to want a slightly wider and longer enclosure.

On the other hand, if it is an arboreal tarantula, it can be a lot skinnier, but it needs to be tall enough for your tarantula to climb up.

Terrestrial tarantulas need at least several inches of substrate at the bottom of the enclosure so they can dig or burrow as much as they want. He will also need a substrate that will hold up and not collapse on them when they are in the burrow.

Arboreal tarantulas do not need all that much substrate on the bottom because they will spend most of their time climbing structures.

When it comes to terrarium setup, terrestrial tarantulas do not need a lot when it comes to accessories. They would enjoy things like a small tunnel or a piece of bark to hide under.

Extra lighting is not necessary for either kind of tarantula because they do not like bright lights. The regular lighting in your room is enough for your tarantula to be perfectly happy. If you are wanting to add a light to your tarantula’s enclosure, consider using a red light.

However, arboreal tarantulas do better in tropical climates, so you are going to want to mist their enclosure regularly to ensure that it stays humid enough.

The Guyana Pink Toe Tarantula is very unique because its hairs look almost blond. There are a number of different pink toe species, and these specific kinds tend to be a little bit more aggressive than some other breeds, but they are also on the smaller end (only growing to about 12 centimeters), which can be good for beginners.

Arboreal tarantulas are usually faster than terrestrial, and Orange Tree Spiders are the fastest tarantula there is. They do have quite a painful bite, but their hairs are not going to cause you any discomfort. Because of their speed and temperament, they are generally best for owners that are at least intermediate level.

The Candy Shop Spider has a fun name and a beautiful look. It is a dwarf species, which means it only grows to a few centimeters. They are also very delicate, especially when they are younger, which is why they are usually better for more experienced tarantula owners. They are also rather expensive. But if you think you are ready for this delicate breed, they are a great option.

When you think about a tarantula, the picture that pops into your mind is likely the Mexican Red-Knee tarantula. These tarantulas are very docile, which means they are really easy to handle and great for beginners. Plus, you only need about a 5 to 10-gallon tank.

The Costa Rican Zebra tarantula is a very calm, ground-dwelling species. However, they can move quite fast, which means that despite their temperament, they are not ideal if you are wanting to hold your pet spider. Nevertheless, this spider breed is a must-have for a lot of tarantula hobbyists.