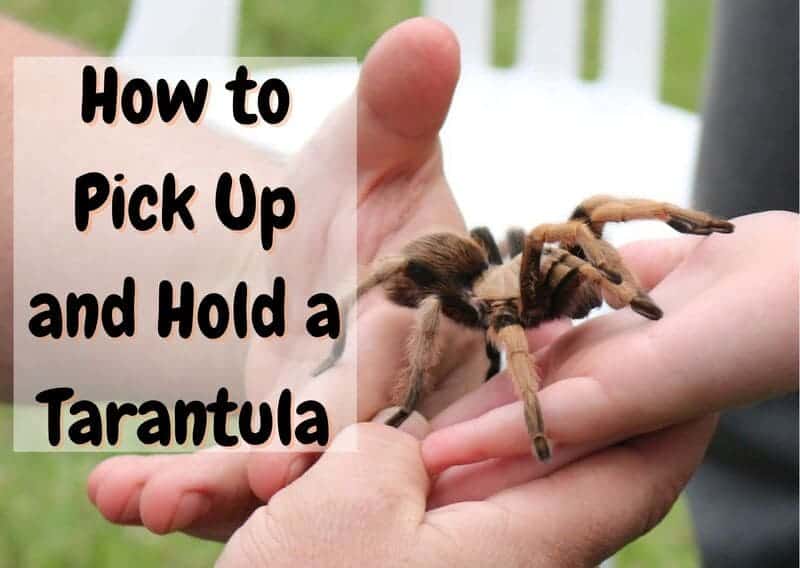 Handling a tarantula is an exciting experience, but quite a daring one for first-timers. Understandably so, since tarantulas have been too often depicted as vicious spiders ready to bite on a whim. However, the reality is very different. Tarantulas are very docile creatures and safe to handle.

Each tarantula is different so you might want to experiment and see what method the spider responds better to.

Picking Up a Tarantula – The Different Methods

There are several methods for handling tarantulas to reduce the risk of getting bitten or hurting the spider:

Each method has its own advantages and disadvantages. Pinching is often the safest way to pick up a pet tarantula, but there is a chance of injuring the tarantula if you are not careful.

After pinching the spider, pick it up quickly and set it on the open palm of your opposite hand. If the legs leave the surface at the same time, the tarantula is less likely to feel threatened.

The forceps provide an alternative to the pinching method but still involve pinching the legs. You use the forceps in place of your thumb and forefinger. After pinching the spider with the forceps, you swiftly set it on the palm of your hand.

With cupping or palming, you swiftly cup the spider underneath its abdomen with both hands. You perform this action from above and fold the legs inward as you slide your hands underneath.

When completed, you should have the spider cupped in your hands, keeping it from biting or moving. Due to the complexity of this action, it may not be the best option for beginners. It also keeps the spider from walking around, eliminating the point of handling.

Free handling requires you to keep your hand flat while allowing the tarantula to walk onto your open palm. This is one of the easier methods and least likely to aggravate the spider.

Place your hand near the tarantula, with your palm up and your fingers straight. Use a finger from your other hand or forceps to gently coax the tarantula toward your hand.

To use the cup and paper method, simply place a paper cup over the tarantula, and slide a piece of paper underneath. This is also one of the recommended methods for removing a tarantula from its habitat.

After capturing the tarantula in the cup, carefully place it on a flat surface. Tilt the cup to allow the tarantula to walk from the paper to your open palm.

When you use one of these methods and have the tarantula in your hand, ensure that your hand is no more than a foot above a flat surface or the ground.

To keep the tarantula from falling or crawling over, use the hand-to-hand method. As the spider starts to crawl, place your other hand in front of its path. It should crawl to your second hand. Repeat this process, allowing the spider to continually crawl from hand to hand.

How to avoid dropping your tarantula on the floor

No matter which handling method you use, it is important to avoid dropping your spider. Tarantulas can live up to 30 years, but a fall of more than a foot could cut your pet’s life short.

A significant fall may damage its legs, potentially requiring amputation. However, the worst risk is that the abdomen will split open, killing the tarantula. The most common reasons for dropping a tarantula include:

To reduce the risk of accidentally dropping your tarantula more than a few inches, use a large, flat surface, such as the floor, a table, a bed, or a desk.

It is easier to place the tarantula on the surface first, as reaching into the habitat is often awkward when using any of the handling methods discussed above.

When should you NOT handle a Tarantula?

One of the best ways to avoid getting bitten is to pay attention to the warning signs of a tarantula attack. As with most animals, tarantulas give a warning before attacking.

There are also signs that a tarantula does not want attention and that it may act defensively if picked up. If you detect any of these signs, avoid handling the tarantula:

Lifting one or two front legs is often the first indicator of a defensive tarantula. The lifted legs remain tense and may slightly wave back and forth.

The next defensive stance involves lifting its first two legs and extending its thorax into the air. While the previous stance was more of a warning, this stance indicates that the tarantula is ready to bite.

When the tarantula turns around and faces its abdomen toward you, it’s getting ready to urticate hairs toward you. When the hairs touch your skin during this process, it causes a stinging sensation and may cause skin irritation.

A tightening of the limbs occurs when the tarantula wants to hide from its threat. Avoid picking up a tarantula in this state, as it can quickly assume one of the defensive stances.

A tarantula grooms itself by licking its feet and rubbing them against its body. During the grooming process, the tarantula may become agitated when picked up.

Tarantula handling during the molting period

You should not pick up a tarantula when it’s preparing to molt. When a tarantula seems unusually slow and refused to eat, it is likely getting ready to molt.

During the molting process, the tarantula turns over and lies on its back until it’s done. This can last between a few minutes to a couple of hours. You should never handle your tarantula during this critical stage.

Also, allow at least a week or two before you handle your tarantula after the molting process since its exoskeleton is still fragile during that period.

Avoid Provoking or Aggravating the Tarantula

Tarantulas can bite when they feel threatened or provoked. Besides paying attention to the signs of an agitated tarantula, always follow these simple tips for keeping your pet calm and docile:

Basically, whenever you pick up a tarantula, keeping it moving from hand to hand is your only concern. Do not move it around, wave it around, or use any fast movements, and things will go smoothly.

Tarantula Handling: What You Need to Know beforehand

Tarantulas may look scary at first, but they are very interesting creatures, and understanding their anatomy may eliminate some of your fears.

Tarantulas have two main body parts – the prosoma (abdomen) and the opisthosoma.

Tarantulas are Relatively Docile and Shy

A lot of the fear of tarantulas comes from commonly believed myths. One of the most widespread misconceptions about tarantulas is that these creatures are naturally aggressive to men and pets.

People fear that the tarantula spends its time looking for victims, which is not true. Most tarantulas are surprisingly docile creatures, depending on the species. They only bite when provoked or when they feel threatened.

Even in the wild tarantulas rarely bite humans, as they prefer to search for insects and small prey.

3. What really happens if you get bitten?

If you do get bit, you may worry about the venom. Luckily, the idea that tarantula venom can kill is another myth.

The National Institute of Health doesn’t consider tarantula venom dangerous. However, it may cause irritation. If you get bit, wash the site immediately and apply a cold compress to reduce swelling.

Some people do experience allergic reactions to tarantula bites. Instead of mild irritation, you may experience itchiness, puffiness around the eyes, and redness.

If you notice an extreme reaction, you should visit your doctor or local hospital, but you don’t need to worry about going to an emergency room or finalizing your will.

Learn More About Your Species of Tarantula

Before handling a tarantula, you should know more about its typical behavior. The slow-moving, docile species of tarantula that are easier to handle include:

New World tarantulas are generally calmer and slower compared to their Old-World cousins. Species from the latter group include the King baboon spider and the Pterinochilus murinus, which have a reputation for being aggressive and should not be handled if you are a tarantula novice.

What if I’m scared of spiders?

Eliminating the fear of getting a bite also reduces the risk of dropping the spider. When you’re scared of the tarantula, you’re more likely to jump or drop it if startled.

Some people advise against handling a tarantula if you have a phobia. However, confronting your fears is the most effective solution.

If you are handling the spider for the first time, try to limit the duration. Hold it for a minute or two and put it back in its habitat. With frequent handling, you should eventually get over your fear.

Should You Wear Protective Gear When Handling a Tarantula?

One of the biggest risks with handling a tarantula is accidentally dropping the spider, which typically occurs when the handler is afraid of getting bit. To reduce this fear and the risk of getting bit, some people choose to wear gloves.

A pair of work gloves should protect against the fangs of a tarantula. For complete protection, consider wearing long-sleeved clothing and tucking your pants into your socks. This eliminates spots where the tarantula can reach bare skin.

How Do You Keep Your Tarantula from Biting You?

You may be surprised to learn that most tarantulas are not aggressive and make great pets. However, these spiders can bite. These steps should help reduce the chance of feeling the sting of a tarantula bite:

The general rule is to avoid handling your tarantulas too frequently. The more you handle the tarantula the greater the chance that you may eventually drop it.

Some owners even recommend never handling the spider unless necessary, such as when transferring it to a different habitat. You should also avoid provoking the tarantula during handling. Don’t blow on it or wave it around.

Remember that they only bite when they feel threatened, and sudden movements can startle it. To protect against bites, you may also choose to wear protective clothing.