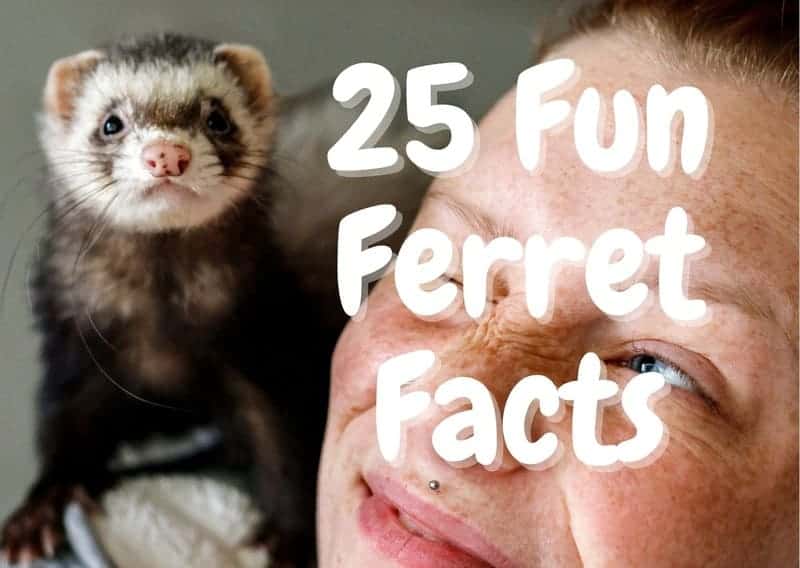 25 Ferret Facts That Will Surprise You

The scientific name for a ferret is Mustela putorius furo which actually stands for “stinky little thief“. While this name may sound mean to those who have never owned a ferret, it will make perfect sense to seasoned ferret lovers. Ferrets love to take pretty much any small things they can get their paws on and hide them in stashes around the house. If something you need ever goes missing, be sure to check all your ferret’s favorite stash locations.

3. Ferrets Used to Work for NASA

Before we had robots, ferrets used to work for major companies like Boeing and NASA to run cables in air crafts. Ferrets have also been used to run cables underground at big events, including the royal wedding of Lady Diana and the Millenium concert at Greenwich park. Isn’t it cool to have a pet that used to work for NASA and for the royals?

Ferret legging is a sport of endurance. For this sport, people (typically men, but it can be women too) take a ferret and put it in their pants. The pants are tied at the bottom and belted at the top, and whoever can endure the ferret scratching and biting the longest wins. The current record is held by Reg Mellor, who beat out the previous record of 60 seconds with a whopping 5 hours and 26 minutes.

5. Ferrets Are Not Actually Rodents

6. Ferrets At The Races

Ferret racing is another entertaining game that people have been enjoying for decades since British ferreters got the idea in the 1980s. Today, ferret racing is typically done in the countryside, and bets are taken on by onlookers. Watching the ferrets bolt through the tunnels is a lot of fun for ferrets and people alike.

7. The Legality of Ferrets

Ferrets are rather common household pets, so you would not expect to have to check out the law before you bring one home. However, in California, Hawaii, New York City, and Washington D.C., it is illegal for anyone to own a ferret. Additionally, in many states and cities, you have to get a special permit or license in order to bring home a ferret. So make sure you check out the law before you move with your furry ferret friends.

8. Ferrets and Hawks: A Surprising Duo

Ferrets, despite their small size, are natural hunters in the wild, and they actually can be used as trained hunting partners for falconers. Falconers (people who hunt with birds of prey) can train ferrets to drive prey to their hawk or falcon; however, the pair needs to be introduced from a young age, so the bird does not mistake the ferret for the prey.

In the wild, ferrets have very short lifespans. Most wild ferrets only live to be between 1 and 3 years old. However, in captivity, they can live a lot longer. Pretty much all domesticated ferrets should live to be at least 4 to 6 years old, but some live even longer and see closer to 8 or 9 years. In fact, the oldest ferret on record lived to be fifteen years old.

Ferrets have pretty distinctive body shapes and appearances, so you might be surprised to hear that some people actually sell them as poodles. In 2013 there were people in Argentina drugging their ferrets with growth hormones and steroids, giving the ferrets a new haircut, and then selling them to unsuspecting buyers as miniature poodles. Believe it or not, the transformation was so good that the owners did not realize they actually brought home ferrets until the vet let them know.

11. Why Ferrets Are So Flexible

12. Ferrets Can Get The Flu Too

Ferrets are actually capable of catching human strains of the flu. This means if you come home with the flu, you might end up with an extra trip to the vet. Additionally, because ferrets can catch human flu, they have traditionally been used to test human flu vaccines.

If you have ever owned a ferret, you probably notice that he spends a lot of time sleeping every day. In fact, most ferrets will sleep anywhere from 14 to 18 hours a day. As a matter of fact, ferrets can go into such a deep (or dead) sleep that you can barely detect a pulse at all. It is almost as if they are hibernating.

14. The Dream World of Ferrets

Another interesting sleep fact about ferrets is that they have a lot of REM (or rapid eye movement) when they are asleep. In fact, sleep studies done on ferrets have found that they spend around 40.28% of their total time asleep in REM sleep. The REM stage of sleep is when most dreams occur, so it is probable that ferrets dream a lot more than other pets.

15. No Fruits and Veggies for Your Ferret

Ferrets are what are called obligate carnivores. This means that ferrets’ digestive systems are really only set up to process meat and other sustenance that comes from the prey they catch. In fact, other nutrients like fruits, vegetables, grain, and dairy can cause a lot of problems for your ferret’s overall health. This is why many experts recommend a diet of mostly raw meats for ferrets or at least a kibble that is high in protein and fat and low in sugars, starches, etc.

Ferrets are known to dance around. In the wild, ferrets and other similar animals like stoats and weasels are known to perform a dance for their prey to send them into a trance and make them easier to catch. In captivity, domesticated ferrets will still dance, but it seems to be just for fun. During the dance, they arch their backs, puff out their tails, and hop around from side to side. Generally, dancing is a sign that your ferret is happy and content.

While your ferret is inevitably going to do something seemingly stupid and get himself into trouble, ferrets are actually very intelligent creatures. Because they are so smart, you can train them to do a number of different functional and fun tricks. On the functional side of things, you can train your ferret to walk on a leash or use a litter box. But you can also teach your ferret a variety of different fun tricks in response to verbal cues. However, their intelligence (combined with their flexible bodies) is why they are such excellent escape artists, so be sure to ferret-proof your space.

The rumor that ferrets can be smelly pets is not a myth, especially if you do not get your ferret desexed. Ferrets are known to release a scent to mark their territory, and they also have naturally smelly oil glands. To control the smell, you should make sure to regularly clean their cage and any rooms they have access to. However, you should not bathe your actual ferret all that often, as that can actually make your ferret smell more as the oil glands try to replace the oils you washed off. Only bathe your ferret a few times a year when absolutely necessary.

You may have heard in the past that ferrets are nocturnal, but ferrets are crepuscular creatures. That means that they are naturally more active and awake at dawn and dusk but sleep a ton at pretty much any other time of day. If your alarm clock does not wake you up at dawn, your ferret sure will, and when you are winding down for the evening, your ferret will be up and ready to play.

Ferrets actually do not have a great sense of vision. They are nearsighted creatures, which means they can only see things clearly when they are very close up. However, ferrets have excellent senses of smell which allow them to hunt and find things even if they cannot see them clearly. This does mean that your ferret might come running whenever you open the treats, even if you are on the other side of the house.

21. Ferrets Have Been Pets For a Long Time

While the popularity of ferrets has come in waves, they are by no means new or even relatively new pets. Ferrets were domesticated for the first time about 2,500 years ago. They were originally domesticated as hunting animals, but they have also been beloved pets for a long time. However, they have only really been considered household pets in America for about 30 years, and many people still argue that they shouldn’t be.

22. Ferrets Used to Be Considered Royalty

For a long time throughout the Middle Ages and Victorian era, ferrets were actually status and symbol pets. Around Europe, ferrets were only pets for royalty, clergy, and nobility. In fact, the members of these high classes wanted it to be such a sign of status that in 1390 the British made it illegal to keep a ferret as a pet if you were not a royal, noble, or a member of the clergy.

23. Ferrets Were Considered Pest Control in the US

While ferrets have not been household pets in the United States for all that long, they were first introduced to the country in 1800 on boats. Sailors would bring ferrets onto boats in order to keep vermin away from the food and other supplies. The only problem would be when the ferrets would get into the food and supplies instead of the vermin.

The USDA or United States Department of Agriculture used to actually recommend that farms buy domesticated ferrets as a form of pest control. When farmers would take this recommendation, they would have to hire someone to care for and watch the ferrets. This caretaker was called a ferretmeister.

As mentioned before, ferrets are naturally great hunters. In the wild, they will catch and hunt things like small rodents, frogs, and even rabbits. Europeans noticed this natural skill and decided to use it to their advantage. Early European ferret owners domesticated their ferrets and trained them to hunt rabbits, mainly for sport but also for sustenance.