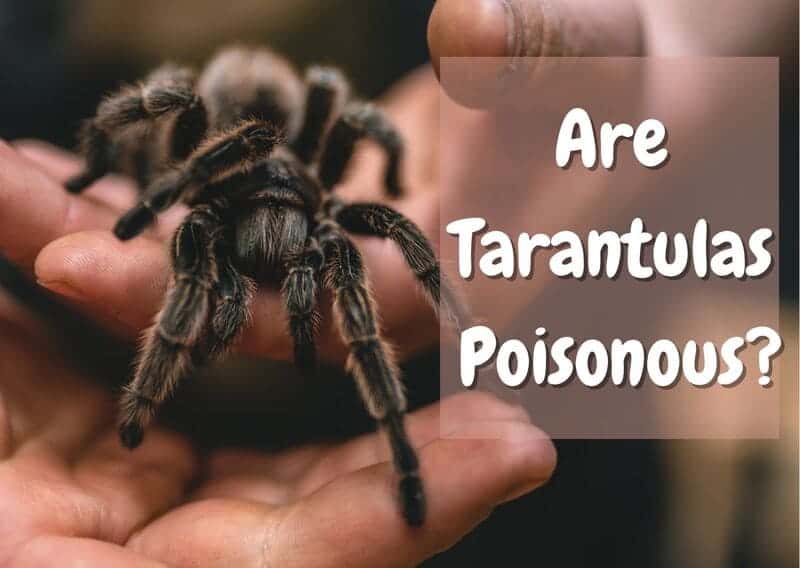 Tarantulas are one of the most villainized creatures in media, but is their bad rap really justified? Whether you are thinking about getting one as a pet or you just live in an area where you might come across one, it is important you know how to be safe.

In this article, we are going to go over how dangerous a tarantula actually is in addition to what you should do if you happen to run into one.

As a matter of fact, tarantulas are not poisonous. In fact, in many countries, tarantulas, fried or spiced, are considered to be a delicacy. However, while you can eat every part of the tarantula, most people who eat tarantulas prefer to remove the hairs before they do so.

What Is The Difference Between Poisonous and Venomous?

The terms venomous and poisonous are often mixed up. In fact, most people use poisonous to describe both things that are truly poisonous and things that are actually venomous. When you are researching animals (either those you might come across in the wild or those you want as a pet), it is important to understand the difference because they mean two very different things when it comes to your safety.

Poisonous is used to describe organisms that are fatal or release toxins when you eat them. Usually, it is plants that are poisonous, not animals because being poisonous is not a great defense mechanism for animals. However, there are still some animals that are actually poisonous.

Venomous, on the other hand, is when animals release some sort of toxin when they bite or sting. The toxins can range from slightly harmful to extremely deadly and all still count as venomous. Animals like snakes and some species of spiders like the Black Widow are said to be venenous.

After learning the difference between poisonous and venomous, you may be feeling more concerned about the latter instead of the former. However, while some tarantulas may have a slightly venomous bite and many of them have hairs that carry some venom, it only (at most) causes pain and sometimes only mild discomfort.

Can A Tarantula Kill A Human?

So all of this information is likely making a tarantula seem a lot less scary, even if looking at one of these furry eight-legged creatures still gives you the creeps. But, is it possible for any tarantula to kill a human?

No, unless you have a special (and very rare) allergy to tarantulas, a tarantula cannot kill a human. In movies and TV shows, tarantula bites are often dramatized and people need to get help quickly or they will die. However, in reality, a tarantula bite is not all that dangerous.

Most tarantula breeds that you might come across have relatively mild bites. Most won’t feel any worse than a bee sting and will not cause any lasting problems. Even the more venomous breeds of tarantula will only cause discomfort and sickness for a few days and the person will recover completely. In fact, there are absolutely no recorded deaths connected to tarantula venom.

Can Tarantulas Kill A Dog Or A Cat?

So what about your pets? Are they at a higher risk when it comes to tarantulas?

The answer to this question is actually yes. While tarantulas pose no real threats to humans (especially adult humans), they can pose a threat to your dogs or cats. There are some breeds of tarantula that can release enough venom to kill a cat or small dog.

Furthermore, there is definitely enough venom in a tarantula bite to make your dog or cat seriously sick for a few days, so if a bite does occur, you should take him immediately to the vet.

It is also worth mentioning that your dog or cat could also be dangerous to a tarantula, especially a pet tarantula. If your dog/cat confuses your tarantula with a toy, he could scratch or seriously damage your small, furry pet tarantula.

There are probably only two ways that you have seen tarantulas portrayed in media. The first is aggressive and dangerous spiders that you should stay far away from. The other is gentle furry creatures that some people calmly hold in their hands or on their arms. So which one is more accurate?

Well, the truth is, tarantulas are not a naturally aggressive species. Pretty much all tarantulas will leave you completely alone if you leave them alone. In fact, when most tarantulas are threatened by a predator, their first instinct is to hide and or run, not attack. It is only when they have no other option that they will bite, but even then they do not always release their venom.

Of course, there are some breeds of tarantulas that are more aggressive than others, but the majority of the time, if you leave them alone, they will leave you alone.

What Should You Do If You Come Across A Tarantula?

Even knowing that tarantulas do not pose any real threat to you, coming across one can be quite scary and will likely cause an immediate fight or flight reaction. So what should you do if you happen to come across a tarantula while outside in your yard or on a walk somewhere?

Well, first of all, there is not usually any reason to kill the tarantula. As mentioned before tarantulas pose no real threat to humans. If you have pets or small children you are worried about (or have an infestation) you can call an exterminator to deal with the problem. But most of the time, you really just need to leave it alone and walk the other way or past it.

Because you do not know for sure what will spook a tarantula, it is best not to try to touch or pick up the animal. Even though it will not harm you, a bite is not pleasant.

What Should You Do If There is A Tarantula In Your House?

Tarantulas do not live in webs like many other similar species, they live in burrows in the ground. Additionally, most tarantulas rarely leave their burrows.

Females almost never will (unless absolutely necessary) and males typically only leave when they are looking for females to mate. For this reason, it is very unlikely that a tarantula wants to be in your home. Instead, it is more likely that he accidentally crawled inside and is now stuck.

Because of this, all you really have to do if a tarantula is in your house is capture it and move it outside. Once you do, he likely won’t come back because he does not want to be there either. However, if you do seem to have an infestation or regular problem, it is best to call an expert exterminator.

What Happens If A Tarantula Bites You?

If a tarantula does happen to bite you, it will likely feel similar (pain-wise) to a bee sting. Often, the area where the tarantula bites will also become warm and red. Additionally, if the tarantula feels particularly threatened and flicks hairs at you, you may experience itchy bums where the hairs land. The itching can last a while.

If you are allergic to tarantula venom, there are other symptoms that you may experience. Relatively minor reactions include itchiness, puffiness, swelling at the sight of the bite, and a skin rash. More severe reactions include breathing difficulty, loss of blood flow, and rapid heart rate.

If you do appear to be having a severe reaction, it is best to seek medical attention right away. However, most of the time you can just wash the area with some soap and water and then ice the bite. You could also consider taking some over-the-counter pain meds or allergy meds.

Where Are Tarantulas Located In The United States?

Tarantulas can live anywhere. In fact, because they are common pets (and sometimes are released or escaped), it is possible that you could come across one in pretty much any state. However, tarantulas typically prefer warm and dry climates over areas that tend to get colder or have more rainfall.

For this reason, it is much more likely that you will come across tarantulas in states such as California, Texas, and Arizona. Most of the time the tarantulas will spend their lives in the desert regions in these states. However, during mating season they may wander closer to your home or even inside of it.

Other areas where tarantulas are more common include regions in both Central America and South America. There are also certain species found in regions in Asia. For example, the Cobalt Blue tarantula is native to Myanmar.

What Is The Deadliest Spider In The World?

So if tarantulas (one of the more commonly villainized spiders) aren’t so bad, which spiders do you need to be wary of?

Well, according to the Guinness Book of World Records, the most venomous spider in the world is the Brazilian wandering spider. A single bite from this spider can cause intense pain and a whole host of medical problems.

Usually, within 3o minutes severe symptoms begin to set in like irregular heartbeat, blood pressure problems, nausea, vertigo, hypothermia, and convulsions. If you do not get the anti-venom quickly, it will likely kill you.

What Are Some Animals That Are More Dangerous Than Tarantulas?

Cone Snails: Cone snails are beautiful creatures, but they have quite a sting. While there are only a few humans that will ever get stung by one, the venom is highly toxic and there is currently no anti-venom.

Golden Poison Dart Frogs: While frogs are generally rather safe and even cute animals, the golden poison dart frog is extremely deadly. It is said that there is enough venom in one tiny frog to kill up to ten grown men.

Box Jellyfish: You generally want to keep away from jellyfish as they carry quite the painful sting, but the box jellyfish is especially dangerous. Once stung, the toxins will directly attack your heart, nervous system, and skin.

Black Mamba: Some snakes are dangerous while others are completely safe. One of the most dangerous snakes is the Black Mamba. If you get bit by one, you typically only have 20 minutes to receive the anti-venom, or else it will be fatal.

Tsetse Fly: The Tsetse fly is a tiny little organism (about the size of a housefly), but they carry parasites with them. These parasites can cause serious problems including behavioral changes, poor coordination, and sleeping problems. They can even be fatal.

Is It Dangerous To Keep A Pet Tarantula?

Taking all of the information you have learned from reading this article into consideration, it is not dangerous to keep a pet tarantula. First of all, they will be perfectly happy spending their whole life in an enclosure, so you will not have too much interaction with your pet in the first place. Additionally, when you do interact with your tarantula, he likely will peacefully coexist.

The one thing to keep in mind is that the hairs on tarantulas can be rather irritating when touched. The hairs can cause skin rashes and inflammation in the eyes and nasal passages. However, as long as you keep your tarantula away from your face and wash anywhere your tarantula touches, you should be fine.