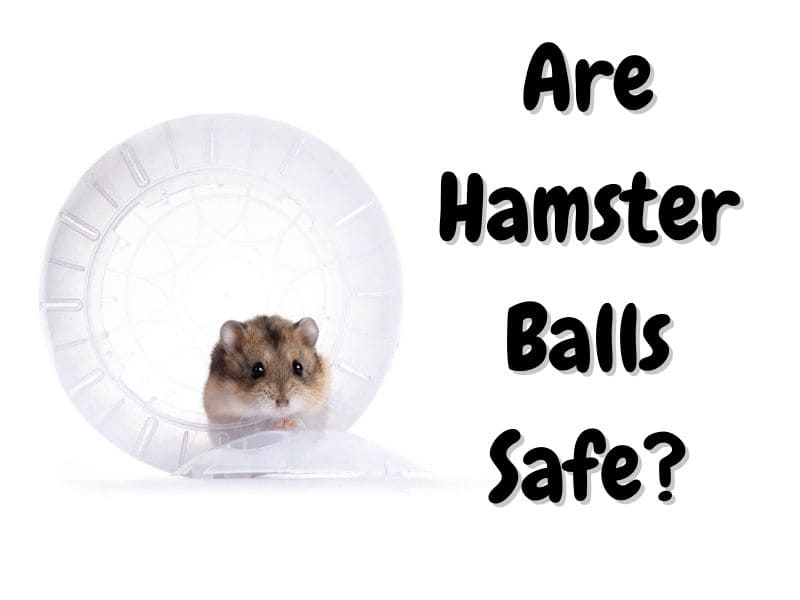 One of the most common hamster accessories is the hamster ball. It is also one of the most controversial hamster accessories. Are hamster balls as safe as they are generally advertised? Unfortunately not. Hamster balls are a stressful and dangerous experience for your critter. A hamster in a ball has little to no control over its environment and might get hurt by hitting objects around him.

In this article, we will cover 6 aspects of hamster balls that make them generally unfit for regular use. We will also go over some safe alternatives to get your hamster out of his cage and exercise if you are not using a ball.

What Are Hamster Balls?

A hamster ball is a relatively small transparent ball that comes in a variety of different colors. These balls generally have a door that twists on and off, and they are hollow so that you can place your sweet hamster friend inside of them. They also have small slits all around so that the hamster can get air while in the ball.

The main purpose of these balls is to let hamsters out of their cage to explore and exercise while making it easier for you to keep track of your hamster, protect your furry friend from other animals and unaware humans, and prevent your hamster from getting under or into things that you do not want him to get into.

While hamster balls seem like a good idea at first, they are generally not a safe option for your hamster to exercise. Let’s have a look at 6 reasons why hamster balls are actually dangerous and what alternatives you may find to allow your furry friend to explore and have fun outside his cage.

1. Hamsters Get Stressed As They Are Disoriented

Hamsters have poor eyesight so they use their whiskers to help orient them in the world, detect obstacles and figure out where they are going. When you put a hamster in a hamster ball, you hinder their eyesight even more because the material and shape of the balls distort and further blur the world around them.

Additionally, because the hamster balls are made out of plastic usually at least 2 mm thing, hamsters are unable to use their whiskers to detect obstacles and make sense of the world around them. This combination of worsened eyesight and inability to use their whiskers can cause hamsters to feel extremely disoriented and stressed.

2. Hamster Balls Are Generally Too Small

Despite the fact that these exercise balls are advertised for hamsters, the vast majority of them are too small for hamsters. A hamster ball would need to be at least the same size as a hamster wheel to make it safe for your hamster.

When hamsters are running in a ball that is too small for them, it forces them to arch their back while they are running. This is not a natural position for them and it can lead to massive spine injuries, backaches, and overall feelings of discomfort.

3. Hamster Balls Are Not Natural For Hamsters

Domesticated hamsters still share the same instincts and needs as wild hamsters. Hamsters in the wild run for miles and miles every night so it is important for you to provide your hamster with ways to mimic that level of exercise – but balls are not a good way to do that.

When you put your hamster in the ball, he will not instinctually know the purpose, nor will he understand what is happening. This can cause your hamster to run around more out of confusion and panic than actually enjoying the exercise and fun that you are trying to provide him. Your hamster wants to explore, but when you put him in a ball, he just wants to get out of it.

Because of this, it is generally better to use other alternatives, which we will go over in a later section, to provide your hamster with exercise and running time.

It was mentioned earlier that most hamster balls do have small slits all around the ball that are there with the purpose of providing air to your hamster while he uses the ball. And while this is true, it is rarely enough.

As hamsters run and warm up, heat can build up quickly inside the hamster ball, and it is unable to escape through the slits or holes. Before long, your hamster may overheat and become dehydrated, which can be extremely dangerous.

Additionally, the holes are not usually big enough to allow any significant amount of air to come into the ball. This is a problem for two reasons. First, without enough air, your hamster could actually end up suffocating and fainting while in the ball. Second, if your hamster poops or urinates while in the ball, the lack of air could cause a build-up of ammonia, which can be extremely dangerous for your critter.

5. Other Pets Around The Ball Can Cause Hamster Trauma

In the wild, hamsters are naturally prey to a lot of different animals. However, they are able to survive and protect themselves because they are so quick and good at hiding. Being in a hamster ball slows down your hamster and prevents him from hiding in small spaces to get away from predators, in this case, your other pets.

Whether he is in the ball or not, your hamster is going to be afraid of your other pets, so preventing him from being able to quickly and efficiently get away can cause your hamster a lot of anxiety and trauma.

6. Hamster Balls Get Dirty Easily And Can Cause Health Issues

We talked earlier about how ammonia can build up when your hamster relieves himself in the ball, and that can cause a lot of health issues. However, that is not the only dirt and health-related problem that your hamster could experience.

First of all, in addition to ammonia, if your hamster defecates in the ball, he will be forced to continue to run in it until you remove him from the ball. This can lead to health problems like bacterial infections and even chemical burns.

Additionally, while your hamster runs in the ball, dust and dirt can get in. Hamsters have fairly sensitive lungs and are prone to respiratory infections, so running around and breathing in dirt and dust while in an exercise ball can lead to severe lung problems.

So we have established that there are several different safety risks associated with hamster ball use, but do hamsters still enjoy hamster balls despite that fact?

For the most part, hamsters do not enjoy spending time in their hamster ball. Often we assume that anything that gets them out of their cages and gives them an opportunity to explore the world around them would be something that they would enjoy. However, the sad truth is that hamsters actually become very stressed and anxious when they are in hamster balls more often than not.

It is hard for them to enjoy time running, exploring, and playing when they are stressed. Your hamster would much prefer to explore and play in a controlled, contained environment than have a whole house to explore and be stuck in a ball.

What Are Some Safe Alternatives to Hamster Balls?

After reading all this, you may be wondering how you can safely provide our hamster with time out of his cage if you are not supposed to use a hamster ball, but the good news is that there are alternatives.

We've all been there - scratching our heads trying to figure out the best rat cage setup possible to make sure our little mischief lives a happy life from day one. How do you know that you are...

If you live in the countryside and are looking for an original pet that is different from the usual dog or cat, a small goat might be exactly what you are looking for. Goats have really unique...