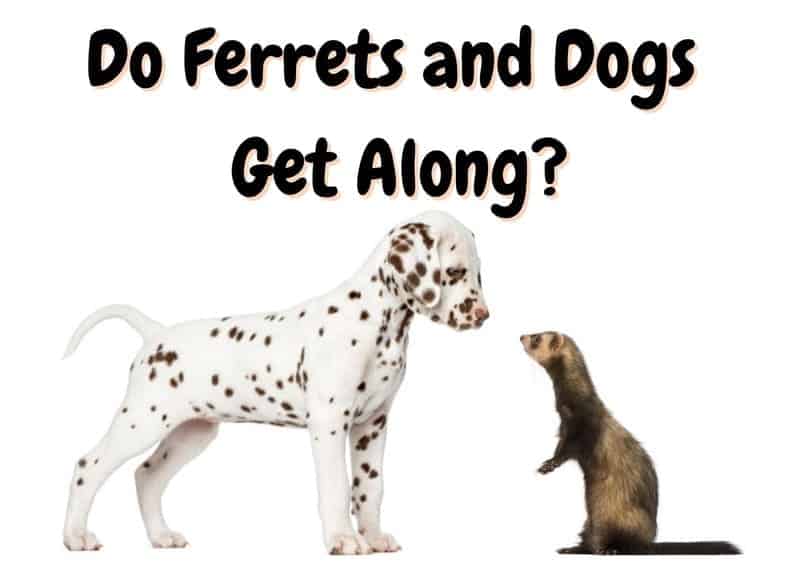 In this article, we are going to go over everything you need to know about dogs and ferrets being friends, including which breeds are best and how to introduce them without causing too much stress.

Do Ferrets Get Along With Dogs?

Yes, many ferret owners have found that dogs make fantastic play pals when provided the right environment and taking things one step at a time. Most pairs of ferrets and dogs will play together, sleep together, and some of them won’t even mind sharing the same meal.

Ferrets and dogs, however, often have different personalities, sizes, and predatory instincts which call for extra supervision, especially at the start. While ferrets will easily spend time with a cat and have many similarities in their personalities and play styles, the topic of dogs and ferrets is a little more sensitive.

So do ferrets and dogs get along? Yes, they can get along just fine. But before you decide to introduce a ferret to your dog, you need to consider a few key points.

Your dog’s personality probably depends a lot on what breed he is, and even then, it can vary a lot from dog to dog. Some dogs are super relaxed and perfectly happy, lounging around the house all day, every day. On the other hand, some dogs are extremely energetic and love to play from the moment they get up to the moment they fall over in exhaustion.

You know your dog’s personality best, and if he is on the more aggressive end, likes to hunt, or is overly rambunctious, this could cause problems when introducing your new ferret into the home.

Ferret personalities also vary from ferret to ferret, but they tend to be a little bit more predictable than dogs. Most ferrets are very playful and inquisitive animals. They are very smart creatures and are even known to get themselves into trouble. They are also natural predators and will instinctively hunt small creatures like rodents or reptiles.

Things to Consider When Introducing Ferrets To Dogs

How To Introduce Your Ferret To A Dog

You are first going to need to pick a location to introduce your dog and your ferret. This should be a neutral territory where both animals will feel less stressed or threatened. If either animal is feeling territorial, a fight is much more likely to break out. You may also want to expose each animal to a toy or item that smells like the other before starting the introduction.

For the first meeting, you are going to want to keep your ferret in a cage or box and your dog on a tight leash. This way, you can allow them to smell each other and meet each other while keeping them somewhat separated and remaining in complete control. Remember, your animals, especially your dog, will pick up on your emotions, so try to stay relaxed and positive.

If this first introduction goes well and both animals seem happy and curious about each other, you can move on to allowing them to interact with close supervision. While it is great to let them play and get to know each other, you should always be right there to separate them if a fight does end up breaking out.

How To Avoid Incidents

The best way to avoid incidents with your ferret and your dog is to pay attention to their body language and other signs that things could be getting tense. The most obvious signs will come from their behavior and body language.

If your ferret and dog are both facing each other and have their ears back, it is likely a sign that they are feeling defensive or possibly ready to attack. If you ever notice your dog or ferret doing this, you’re going to want to separate them and go through the introduction process all over again when they have calmed down.

There are other signs that are dog or ferret-specific. Specific things to look out for with your dog include things like growling, howling, sudden darts at your ferret, nipping, and scratching.

Signs that are ferret-specific include things like hissing, quick or sudden lunges at your dog, or spitting. Even if you only noticed that one animal is upset, you should separate them immediately to avoid an incident.

What Dog Breeds Are Good For Ferrets?

Dog breeds that are known to be friendly and unaggressive are generally best around ferrets. Many owners have found that larger dog breeds are less likely to try and intentionally hurt your ferret (though you may have to be more concerned about accidental injuries with a larger animal.) Many owners have found that breeds like golden retrievers and labradors do really well with ferrets.

No matter which dog-ferret pair you have, they are likely going to do best if they are introduced to each other at a very young age. If your dog grows up around ferrets, he is a lot less likely to view them as prey or a threat. On the other hand, if your dog has never seen a ferret before, he is likely to be much more aggressive.

What Dog Breeds Are Bad For Ferrets?

The dog breeds that you want to avoid are the breeds that are specifically bred for hunting or protecting because these dogs are much more likely to become aggressive around what they view as prey or a perceived threat.

For example, terriers are specifically bred to hunt small rodents like rats, and while ferrets are not technically rodents, your terrier’s instinct will not necessarily make the distinction between the two.

Other breeds that are likely going to have problems with your ferret include breeds like Huskies, Doberman Pinschers, Beagles, Bullmastiffs, and Australian Cattle Dogs. All of these different breeds are known to have particularly strong or high prey drives. This means that even though they are domesticated, they are more likely to have their predatorial instincts kick in.

If you are not sure whether or not your dog has a high prey drive, there are a couple of signs to watch out for. Dogs that have an instinctual desire to chase or catch things are more likely to have a high prey drive. If your dog tries to chase neighborhood squirrels or cats, he likely has a strong prey drive.

What To Do If Your Dog And Your Ferret Do Not Get Along?

However, with patience and training, it is often possible to get your ferret and dog to get along. Nevertheless, even if you do get the two animals to get along, you should never leave them alone unsupervised because instinct or a wrong movement could very quickly lead to an incident.

If there is a sudden incident, remember to try and stay calm. If you freak out, it could cause your animals to panic even more, which could make the situation much worse. Just quickly and firmly separate them and move them to separate areas of the house. When they each have had time to calm down, you can start the introduction process over again.

What Other Pets Do Ferrets Get Along With?

Ferrets often get along well with cats, though it does depend on the temperament and personality of your specific cats. Cats and ferrets are both predators, but they hunt the same type of small game rather than each other. However, there are always exceptions, so you should closely supervise your cat and your ferret, especially in the beginning.

What Pets Do Ferrets Not Get Along With?

Ferrets generally do not get along with any small pets. Ferrets are natural predators, so they will see a lot of small animals that you may have as prey. This includes animals like rats, hamsters, gerbils, birds, fish, various reptiles, etc. Your grown ferret also may be too rough on baby animals like puppies or kittens. With smaller animals, you need to pay close attention so that your ferret is not hurting the other animal. Usually, with bigger animals, you need to pay close attention that your other animal is not hurting your ferret.