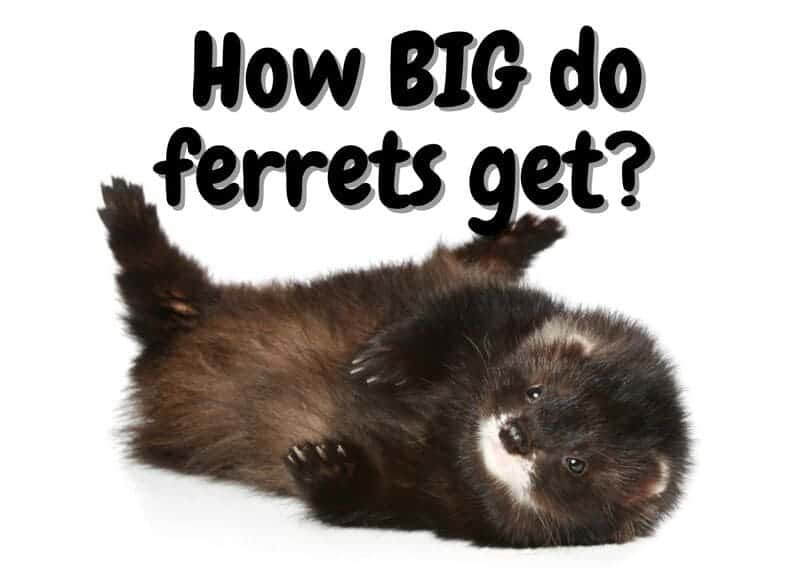 Whenever you are considering bringing home a new pet, one of the important questions you will likely ask is how big you can expect this animal to get. Ferrets are definitely considered small pets. While they are long creatures, growing up to fifteen inches in length, not including their tails, they are very slim and light animals. Of course, the exact size your ferret will get depends on a lot of factors, including genetics, gender, and environment.

In this article, we are going to go over some of the specifics about how big you can expect your pet ferret to get, how fast they grow for the first four months of their life, and some other frequently asked questions relating to ferret size.

How Big Do Ferrets Grow?

When Does a Ferret Stop Growing?

Most ferrets or kits will stop growing at about four months or 16 weeks. If you are used to cats or dogs, this may seem rather young to stop growing, but due to their fast growth rate, they reach full size rather quickly.

However, they may take a little bit longer to finish developing internally and reach sexual maturity. While some ferrets can start reproducing at four months, many will not develop fully till eight or even ten months.

When ferrets are first born, they are only about two inches in length, not including their tail, and only one inch tall. They also only weigh 8 to 12 grams. As newborns, ferrets are extremely dependent on their mothers as they are born completely blind, deaf, and without any teeth. You may also notice that newborn ferrets’ hair looks very different than adult ferrets’ coats do. The hairs tend to be very thin, fine, and pale.

Baby ferrets or kits grow very fast, especially in the beginning. By the first week, most ferrets are already 2.5 – 3 inches long and weigh about 30 grams. Then by the second week, ferrets are closer to 4 or even 4.5 inches long and weigh closer to 60 or 70 grams. While this is still extremely small, they have doubled in length and more than quadrupled in weight. However, besides size and a little bit more mobility, you will not notice large changes for kits yet.

3 weeks is when the development process starts to speed up tremendously. At 3 weeks, baby ferrets start to get their teeth. They also will start opening their eyes and developing ear canals.

As far as size, by the end of week three, baby ferrets will weigh ten times what they did when they were born. Females will grow anywhere from 5 to 7 inches long, and males may grow slightly faster and be up to eight inches.

At about 4 weeks or one month old, things start getting fun. When they are four weeks old, their eyes are likely completely open, they can hear, and they are much more mobile. The baby ferrets will even start to play with each other whenever they are awake.

Between weeks five and six, baby ferrets will finish developing several key features, including their teeth. By the end of week six, pretty much all baby ferrets will start eating more solid foods and will be a whole lot less dependent on their mothers, though they are not ready to be on their own yet.

During weeks six to eight, ferrets will learn the last several things that they need to in order to function separately from their mothers. In fact, some breeders will start sending their ferrets to their new homes at the end of week eight. However, most experts still recommend you wait until the end of week 12 for the ferret’s overall emotional and physical health.

At twelve weeks, most ferrets are ready to be separated from their mothers and siblings when they are sent to their new forever homes. Neither male nor female ferrets are fully grown yet, but they are getting close. That means if you bring your ferret home from the breeder at 12 weeks, you can expect that your ferret is almost fully grown. Male ferrets will be 12 to 14 inches long, and female ferrets will be 12.5 to 13 inches.

By 16 weeks or 4 months old, ferrets are done growing and will have reached their full size. Male ferrets will weigh between 2 to 2.5 pounds, and female ferrets will be lighter, at only 1 to 1.5 pounds. It is around this time that you will want to get your ferret fixed to prevent them from breeding, going into heat, or becoming more territorial or violent.

How Big Do Angora Ferrets Get?

Angora ferrets are purebred long-haired ferrets. They tend to be harder to find and a bit more expensive, but if you want a slightly bigger ferret, you could consider getting an angora ferret. Fully grown angora ferrets can grow anywhere from 1 to 4 pounds and tend to be at least 18 to 24 inches long.

How Does a Ferret’s Size Compare to a Mink and a Weasel?

Ferrets, minks, and weasels are all very similar animals as they belong to the same family, so it can be easy to get them confused. For this reason, size differences can help you identify which is which. Weasels, for example, are about half the size of ferrets when it comes to their lengths. Most weasels only grow to be 6 to 9 inches long. However, their tails are similar in size.

Minks, on the other hand, are much more similar in size to ferrets than weasels are, though they do tend to be slightly larger. Minks typically grow between twenty and twenty-three inches long and weigh between 1.5 to 4.5 pounds. However, when minks are raised on a farm, they may weigh up to seven pounds.

For a complete discussion about the differences between ferrets, weasels, and minks, see our articles Weasel VS Ferret and Mink VS Ferret.

How Big Should my Ferret’s Enclosure Be?

It is important that you get your ferret’s enclosure right because he will likely be spending a good amount of time there. In addition to making sure your ferret has access to comfortable bedding, food, and water, you want to make sure there is enough space for your ferret to play. Ferrets need an enclosure that is a minimum of 18 inches tall and 24 inches wide to provide at least six cubic feet of space.

What should I Do If my Ferret Is Overweight?

If your ferret is dangerously overweight, you should, of course, talk to your vet. However, there are some preemptive measures you can take before talking to your vet. First, you want to make sure your ferret has a healthy diet that is high in protein and low in carbohydrates.

You also want to make sure that your ferret is getting plenty of exercise. He should have toys to play with inside his enclosure, and he should have at least four hours of playtime outside of the enclosure every day.

Do Pet Ferrets Get Bigger In The Winter?

Yes, your pet ferret will likely put on some weight in the wintertime. In fact, some ferrets will gain up to 40% of their weight throughout the winter only to lose it again come springtime. They will also tend to get a thicker coat. Both changes are necessary, automatic changes that black-footed ferrets develop in order to survive winter in the wild.

How Long Do Ferrets Live?