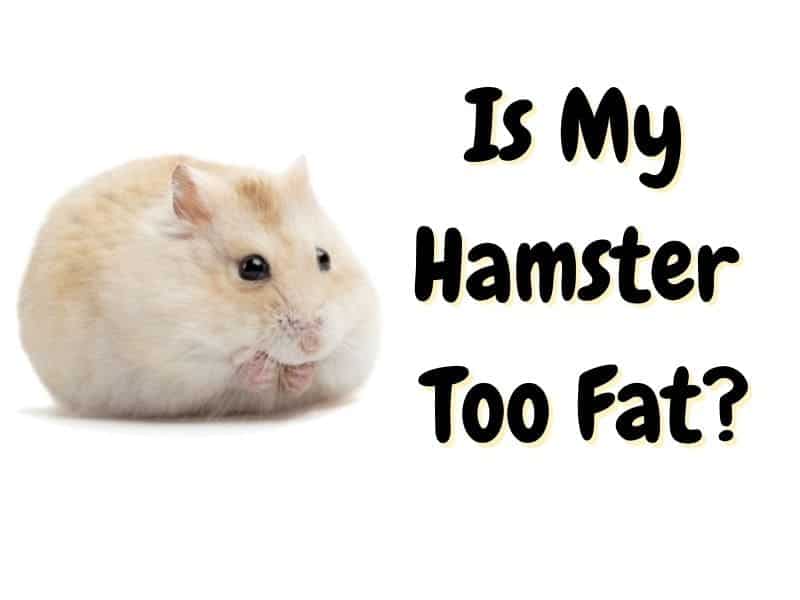 Part of what makes hamsters so cute is their round, furry little bodies, and when they start to get a little chubbier, they can actually start to look even cuter. Unfortunately, if your hamster puts on too much weight, you could run into some pretty serious health problems.

If you want to know what to do if your hamster is starting to gain too much weight, then read on. We will go over how to tell if you actually have a problem on your hands, potential causes, and what to do to help your hamster get back to a healthy weight.

Can a Hamster Really Be Overweight?

It can be difficult to really ascertain whether or not your hamster is fat or just fluffy. First of all, in their normal sitting and walking positions, their skin tends to bunch up, which often gives them a rounded shape even if your hamster is a perfect weight.

They also have big cheek pouches that can reach the whole way around their heads and back to their shoulders, which can give them a chubbier look.

Additionally, they are very fluffy creatures. They can have so much fur that it can be really hard to figure out what your hamster’s true size is.

How Do I Know if My Hamster is Actually Fat or Just Fluffy?

While there may be some slight changes after that, there should not be any major size changes to your hamster. If you are looking back at pictures of your hamster and you notice that your furry friend has gotten significantly larger/wider over time, your hamster may be a little overweight.

It can also be helpful if you can get your hamster to stand up on his back legs. You can wait and watch for your hamster to do this on its own, but hamsters do not stand up like this a lot, so it can be better to try and entice your hamster into the position.

Usually, the easiest way to do that is to hold something above their head that they want, such as a yummy treat. As they reach up to get the treat, if your hamster’s body straightens out, he is probably just a fluffy hamster, but if it doesn’t and keeps its round shape, it is quite possible that your adorable furry friend is a little overweight.

How Fat is My Hamster?

However, in order to make an accurate determination based on the number on the scale, you need to know the proper weight for your hamster, and that varies by hamster breed.

Syrian hamsters are normally about 6-9 inches long and weigh somewhere between 3.5 and 5.3 ounces or 100-150 grams. However, there are times when Syrian hamsters from private breeders are bred specifically to be larger, so it is possible for a Syrian hamster to healthily weigh up to 7.9 ounces or 225 grams.

If your hamster is above that weight, even slightly, there is a good chance that your Syrian hamster would be considered overweight.

Additionally, they are naturally very round hamsters, so it can be difficult to figure out if they are overweight just from looking at them.

Campell dwarf hamsters can vary a bit in size, usually growing to be somewhere between 2 and 4 inches in length. Because of this, they can also vary some in weight, so if you are really not sure, it can be helpful to talk to a vet or another expert such as a breeder, but they usually weigh somewhere between 1 and 2 ounces fully grown.

What Are The Reasons Why A Hamster Might Be Fat?

1. Too Much Fatty Food

More often than not, if you have an overweight hamster, the reason is diet. If your hamster is not getting the right ratio of nutrients (fats, carbohydrates, etc.) or if you are giving your hamster too much food.

Your hamster will need about 16 percent protein in their diet and between 4 and 5 percent fat in their diet. As far as amount, a Syrian hamster only needs about 2 teaspoons of pellet food in a day, and the different dwarf breeds only need about 1 teaspoon.

When you put the food in the dish, it is likely that your hamster will quickly pick it all up and hide it. This does not mean you need to replace the food right away or that your hamster is starving. Hamsters naturally stash their food in some parts of their cage out of natural instinct.

If your hamster is significantly overweight, you may need to slowly decrease the amount of food you are giving your hamster.

Make sure your hamster always has access to a wheel and other exercise toys such as climbing toys. It can also be helpful to give your hamster some time outside of the cage in a controlled space for some extra exercise, such as an empty bathtub.

The third potential reason that your hamster is overweight could simply be genetics. Just like people are naturally different sizes and shapes because of genetics, hamsters can be too. This can be the hardest one to solve, but not impossible.

If you believe that it could be a genetic problem that is causing your hamster to be overweight, and simple diet and exercise changes are not working, it may be best to talk to a vet about possible solutions.

4. Could My Female Hamster Actually Be Pregnant?

Another potential cause of weight changes in hamsters, specifically female hamsters, is pregnancy, though this is usually rare if you are not specifically breeding hamsters. Main breeds of hamsters such as Syrian hamsters can only be kept in isolation, so this pregnancy should not happen.

If you get a breed that can be kept in groups, it is generally recommended that you keep them in single-gender groups to avoid this problem and unwanted aggression; however, if you do end up mixing genders, there is a chance that your female hamster could end up pregnant.

So what should you do if your hamster is pregnant?

A hamster’s gestation period is only between 15 and 22 days, depending on the breed, so by the time you notice your female hamster is plumpy, you will likely not have a lot of time to prepare. You will want to put the pregnant hamster in a cage by herself and thoroughly clean the cage to make her environment as pleasant as possible so that she does not eat her babies.

Why Is Being Overweight Dangerous For Hamsters?

Let’s be honest, a slightly chubby, little, furry hamster can be extremely cute. So what is the big deal if your hamster is a little bit overweight?

Well, the main problem is that being overweight can put your hamster at a significantly higher risk for developing a number of different serious health problems. Your hamster could end up developing diabetes, heart problems, liver problems, and more.

There are two main problems that you will have to deal with if your hamster ends up developing these health problems. First, they can significantly shorten your hamster’s lifespan. Depending on the severity of the disorder, things like liver problems and heart problems can be fatal.

The second problem is that treating these disorders can be very expensive. Things like diabetes can mean that you have to buy your hamster medication for the rest of his life, which can add up quickly.

If you are having problems with your hamster and weight, the first thing that you want to do is make sure you have good food. Generally, spending a little bit more on a high-quality mix is worth it if your hamster is having health problems.

You should also take a look at the ingredients list. Healthy hamster food will have a mix of seeds, cereals, and insects or insect larvae. Additionally, you want to avoid foods that are high in sugar.

2. Put Your Hamster’s Food In A Dish

By putting your hamster’s food in a dish rather than scattered along the bottom of the cage, your hamster will not feel like he needs to forage and hoard. When it is in the bowl, he will feel like he has a stash, so he will be much less concerned about running out.

3. Give Your Hamster A Bigger Cage

4. Allow Your Hamster to Explore Out Of The Cage

Giving your hamster time to explore and play out of the cage every day in a controlled space can help him get more exercise and stay in shape. Just make sure you have it totally closed off so that your hamster stays safe.

5. Have Your Hamster Examined By A Vet

If you are having a lot of problems getting your hamster down to a healthy weight, you want to take your hamster to the vet to look for any underlying health problems that could be causing the weight problems. The vet will then be able to give you some suggestions for some extra measures you can take.

link to 62 Animals That Start With The Letter N

Do you know many animals that start with the letter N? We've gathered them in this post - from the mysterious nautilus to the charming nightingale, all the way through to the Nile crocodile and the...

What animals start with the letter M? We've gathered them all here for you to have them in one place - from the majestic manta ray to the annoying moth, right through to the mink and the mole. So...