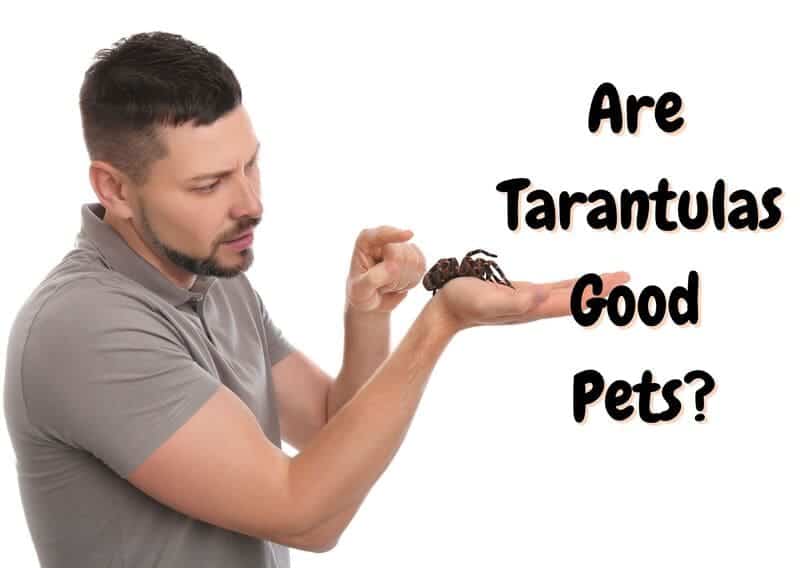 Keeping a Tarantula has become increasingly popular over the past few years in the United States, with the trend getting momentum all over the world. However, in view of the bad publicity tarantulas have received from the media, many would-be owners ask themselves: are tarantulas good pets anyway? Are they high or low-maintenance animals? Are they dangerous?

So do tarantulas make good pets? In short, tarantulas make great pets for the right owners. They are cheap to buy and inexpensive to maintain, easy to care for, quiet, and fascinating to watch. However, do not expect to interact with a tarantula as you would with a dog or a cat: these are lonely creatures who, most of the time, would rather be left alone.

We’ve gathered facts and testimonials from tarantulas owners which will help you make an educated choice as to whether keeping a tarantula as a pet is a good fit for you.

Actually, to the right animal lover, they make great pets. As a spider fanatic, you’ve probably made up your mind of owning one, but then there are your parents, partner, or anyone else you share your home with to convince.

That’s where these 8 reasons come into play.

1. Tarantulas are worth the money

When you’re deciding on a tarantula species to buy, look at the lifespan of both males and females to decide. If your heart is set on a male tarantula, and seven years sounds like a short time, choose a female tarantula that can live up to 30 years, such as the Mexican Redknee Tarantulas and Pink Toe Tarantulas.

2. Tarantulas are not demanding

These relatively low-maintenance creatures will not demand you to nurture them 24/7. They love living in isolation. In fact, playing hide and seek is one of their favorite games. Some tarantula species have different ways they like their owner to care for them, but nothing that you can’t handle.

Just set up a tank with their favorite accessories and they’ll feel at home. You’ll only have to clean their enclosures every 4 to 6 months.

Their eating habits are pretty basic too since they only need to eat a few crickets a couple of times a week. You may buy their food online and have it delivered to your doorstep every month or so, and it’s quite inexpensive compared to what you would pay for a dog or a cat.

3. Tarantulas are inexpensive to own

Except for the rare species, common tarantulas species are inexpensive to buy and care for, costing you anywhere around $20 to $200. Once they fully grow, you’ll only need to feed them once or twice each month. When the molting time comes, they will stop eating for months.

In terms of accessories, let’s take a look at the initial cost:

Except for food and an occasional change of substrate, tarantulas are as low-cost as a pet can be.

4. Tarantulas Are Not Venomous nor Aggressive

Yes, you’ll get to hear that a lot when you tell others that you’re thinking of giving a tarantula a home Although a tarantula bite will be painful, its venom has a low toxicity level to humans.

Have you been stung by a bee before? If you have, you know what a tarantula bite feels like. However, they rarely bite, as they are docile, minding their own business creatures. If a tarantula does feel threatened, it’ll use its hind legs to scrape its hair from its abdomen, flicking them towards the threat.

Therefore, handling them will help your new friend become familiar with you and its environment, so it feels at ease. Here are a few tips for handling a pet tarantula like a pro:

5. Tarantulas are the talk of the town

Seeing tarantulas as a pet in someone’s home is still rare. If you’re a tarantula owner, people will have several questions for you. When people ask you, “What pet do you own, and you say tarantula?”, their expressions will surely change, as who expects someone to say, “I have a pet tarantula.”

Moreover, your tarantula will not demand your attention unlike other animals, such as dogs and cats. Nor will you feel upset leaving them behind. Tarantulas love busy owners, as they prefer their alone time.

We’re going to assume that you are a fan of tarantulas and are searching for reassurance to keep one as a pet. Here you go then — yes, they do indeed make great pets.