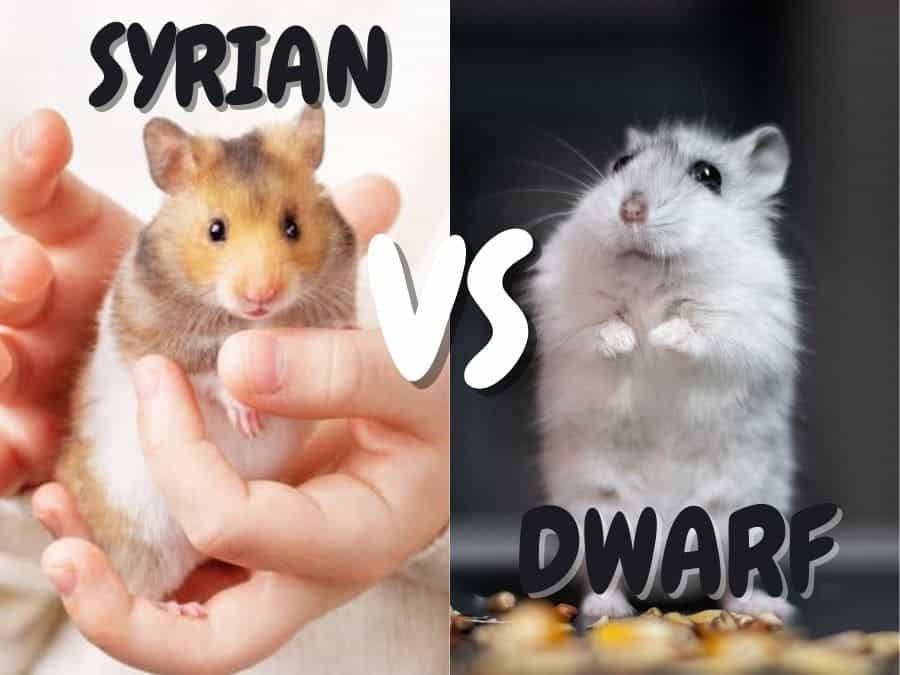 Are you trying to make up your mind about getting a Syrian or a dwarf hamster? The struggle is real. There are five main hamster breeds that you can get as a pet, but you can divide these five main breeds into two groups: Syrian hamsters and Dwarf hamsters.

Today we will help you make up your mind between these two types of hamsters. We will see what are the main differences in terms of morphology, temperaments, habitats, trainability, sleep schedules, and more. You will know in a few minutes which hamster you want to go for!

Syrian hamsters are significantly bigger than dwarf hamsters. Syrian hamsters tend to be between 6 and 8 inches long when they are full-grown, making them the largest hamster breed that you can keep as a pet. They can come in a variety of different colors, though the most popular is a golden fur color, which is how they got the name the ‘golden hamster.’ Syrian hamsters also have large, round eyes.

There are four main breeds of Dwarf hamsters that are kept as pets: Campbell’s, Roborovski, Russian Winter White, and Chinses hamsters. Depending on the specific breed, they tend to be much smaller than Syrian hamsters – somewhere between 2 and 4 inches in length. They come in a variety of different colors and most of them have very short and stubby tails, but Chinese dwarf hamsters actually have decently long tails (about 2 inches in length.)

See also: Where do hamsters come from? An illustrated guide

Syrian hamsters are very independent, curious creatures. They do not play well with other hamsters and need to have their own space and their own cage. However, despite not getting along well with other hamsters, they do great with humans. As long as your hamster is handled by humans from a young age, they can be very affectionate with you and your family. They can even form attachments and bonds with humans.

For the most part, dwarf hamsters do better with other hamsters. In fact, some people even have success keeping dwarf hamster breeds in same-sex pairs or groupings, though there is still a risk that they will become aggressive with each other – especially the Chinese breed.

On the other hand, dwarf hamsters sometimes can be a little bit harder for humans to handle. They sometimes spook more easily and are very fast animals, so you have to be very careful when handling one.

Read: Why do hamsters bite? Here is how to stop that naughty habit

When considering the lifespan of hamsters, there is a lot of different factors that could come into play. Things like your hamster’s genetics, background, care, diet, etc., can influence your hamster’s lifespan significantly, either for the better or the worse. However, looking at average lifespans can help you gain a better understanding of how long you can expect your hamster to live.

For Syrian hamsters, this average tends to be about three years, though some people report that their Syrian hamsters live for longer than that. For dwarf hamsters, we need to break it down by the specific breed:

Takeaway Point: Most hamster breeds live around two years but the dwarf Roborovski lives up to four.

Related: How to Properly Care for a Hamster

How much a hamster will cost you largely depends on where you get the hamster from. For instance, most pet stores sell hamsters for pretty cheap – around $10-20 – while you may end up spending a little bit more money if you go with a breeder. However, with a breeder, you will have a lot more background information about your hamster, so you can have a better idea of what to expect in areas such as temperament and lifespan.

If you decide to get a Syrian hamster, you can expect to pay somewhere between $10 and $20 dollars for a hamster. You can also get a dwarf hamster within that price range, though they tend to be slightly more expensive. Certain breeds of dwarf hamsters, such as the Roborovski dwarf hamster, may even cost closer to 30 dollars per hamster. But again, all of these prices depend a lot on where you get your hamster from.

Takeaway Point: Both Syrian and Dwarf Hamsters are inexpensive to buy, around $10-20 USD.

Syrian hamsters are very active and very curious, so they need a lot of exercise when they are awake in the evening and at night. You will notice that when your Syrian hamster is awake, he is pretty much roaming around his cage constantly. They will also need access to a wheel and other toys that can help keep them both physically and mentally stimulated.

Read: Are Hamster Balls Safe? No – Here is Why

Sleep is actually one area where Syrian hamsters and dwarf hamsters do not vary a whole lot. The first and probably most important thing to understand about hamsters’ sleep is that they are nocturnal animals. That means they tend to be very active at night when most people are asleep and sleep through the day when most people are awake. However, you should have some overlap in the evening and early morning when you can interact with your hamster and watch him run around and play.

This sleep schedule can be a problem for some people, especially if they keep their hamster in their bedroom. All the noise that hamsters make when they are exploring, eating, running, etc., can keep some people up at night.

Takeaway Point: Both Syrian and dwarf hamsters are nocturnal and sleep the same amount of time.

Dwarf hamsters tend to be even harder to train since they tend to want to be handled a lot less than Syrian hamsters. Dwarf hamsters tend to do better as pets that you watch rather than pets you play with. It could take you a lot of time to tame your dwarf hamster enough to just tolerate or enjoy being held and handled.

As far as grooming needs go, Syrian hamsters and dwarf hamsters are similar in that they both need very little grooming help. For the most part, your hamster will handle his own grooming needs on its own. They do not typically need baths, nor do they need a lot of brushing or coat care. In fact, most hamsters are so skittish that they do not even tolerate you trying to brush them at all!

Takeaway Point: Both Syrian and dwarf hamster breeds are low-maintenance pets and have similar grooming needs.

Related: How to Set Up a Hamster Cage Like a Pro

Takeaway Point: A Syrian hamster needs a larger cage than dwarf breeds, but your cage will need to be even larger if you keep several dwarf hamsters in the same cage.

Syrian hamsters and dwarf hamsters have similar nutritional requirements. Both can eat a high-quality pellet food mix that you buy at the store, or you can make their food yourself with a variety of different foods like fruits, vegetables, hay, and even small insects or larvae.

However, the amount of food your hamster will need does vary based on the type of hamster that you get. Syrian hamsters need about 2 tablespoons of pellet food a day, while dwarf hamsters only need about two teaspoons. Idle hamsters have a tendency to get fat quickly so If you are concerned that your hamster is eating too much (or maybe not enough) you can always reach out to your vet for more specific advice.

Health problems that your hamster may deal with include:

While this may seem like an extensive list, many are very manageable with medication or even with simple diet changes. If your hamster is showing signs that he may be getting sick, it is important to reach out to your vet right away. The earlier you catch most health issues, the easier they are to treat and manage.

Takeaway Point: Both Syrian and dwarf hamsters share the same health issues common to all hamsters.

Are Hamsters Friendly with Other House Pets?

You should not leave either a Syrian hamster or a dwarf hamster alone with other pets that you may have, such as cats and dogs. This is less about the threat that your hamster poses (though hamsters can lash out in fear and bite other animals), and more about the danger that your hamster would be in if left with another type of pet.

Sometimes, larger pets like cats can view hamsters as prey. But even if your other animals are not trying to hurt your hamster, they could do so accidentally while playing since hamsters are significantly smaller than most other animals.

If the pet is similar in size (for instance, if you have another type of rodent), you will risk your hamster and your other pet getting into a fight and hurting or even killing one another. For this reason, it is better to keep your hamsters away from other pets that you have.

Takeaway Point: Syrian and dwarf hamsters should not be left with other house pets.

Which one is best for a child?

Both Syrian and dwarf hamsters can be a lot of fun for children. However, if your child is looking for a pet that they can play with and handle, a Syrian hamster is a better option.

Dwarf hamsters are a lot of fun, but they often prefer to be watched rather than touched, especially by quick, little hands. If you are new to hamsters or want to find a pet that your child can take care of with supervision, you are most likely going to want to start with the Syrian hamster.

Does one breed bite more than the other?

Yes, dwarf hamsters tend to bite more than Syrian hamsters. Generally speaking, it is easier to accidentally spook a dwarf hamster than a Syrian hamster, and when they get spooked, they tend to lash out and even bite. This is not to say that Syrian hamsters will never bite (especially if they feel threatened), but they are significantly less likely to do so.

Can you mix and match some of these pets in the same cage?

You do not even want to mix different dwarf hamster breeds, such as Roborovski and Campbell hamsters in the same cage. While dwarf hamsters can sometimes be kept in small groups or pairs, they are more likely to get aggressive with other breeds, and therefore you should not mix and match.