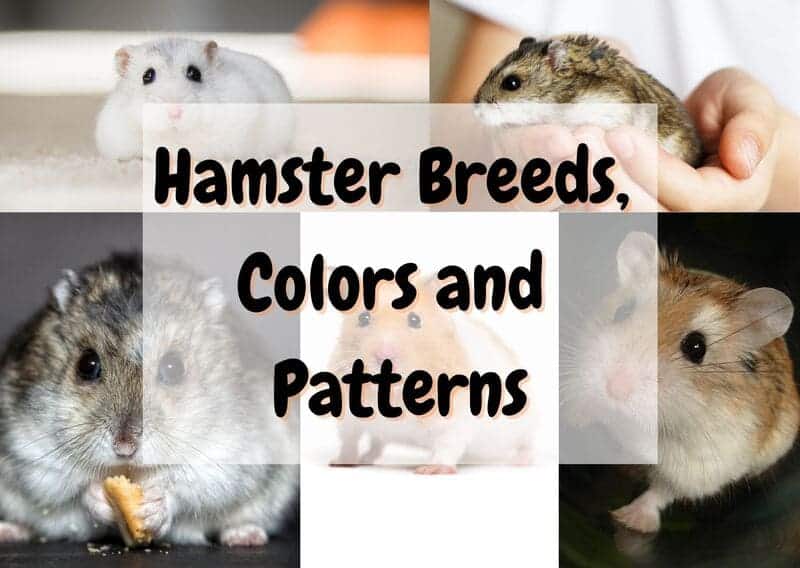 Hamsters breed are many, and they come in many colors and sizes. You might not be aware that the most colorful varieties of hamsters are Syrian hamsters. Included in this guide are all the colors across the various breeds and coat types. You’ll also learn about breed types and what color traits they feature throughout the year.

What are the different hamster breeds?

The Syrian has the widest range of colors of all the hamster breeds, and they are also the largest in size. Not to mention that these hamsters are often more gentle and friendly when you raise them at 8 weeks old.

Siberians are also called Russian dwarf hamsters depending on where you buy them. They are genetically used to colder climates. They change to a white color in the winter and turn brown in the summer months. They are not as tiny as other dwarf breeds like the Chinese hamster but are still very fast and jumpy.

This breed is sometimes called the ‘desert hamster’ because their fur is usually sandy brown, light gray, and gold-colored. They have white stomachs and also have white patches on their faces. They also have white ears that were developed as a defense from predators.

These tiny hamsters are nearly as erratic as mice but have typical brown fur. They have a dark dorsal stripe down the back and black eyes. Some variants include white versions with distinct markings on their head, body, and ears.

What colors do hamsters come in?

An albino has all the trademark signs of being completely colorless. They will have all-white fur and pink eyes. This breed includes the Syrian and dwarf white hamster.

Often called a Panda Bear hamster, black Syrian hamsters are thought to be very tame and friendly. They often turn dark brown as they age and also look more banded over time. Their black coloring comes from a recessive gene.

This is also described as a blue-gray coloring but can also appear as a purple-gray. There can also be a gray dorsal stripe that runs along the back. They will have a white or ivory stomach and dark eyes.

This is the result of a color combination that comes from the parents who have a specific color mixture. To get a champagne color, each parent should have cinnamon, black, and chocolate brown in their fur. The resulting offspring can feature a rich golden brown with wispy light blonde highlights.

This is another cool color that is the result of parents who have genetic markers. You will need each of the parents colored rust and black to get this offspring color. Chocolate-colored Syrian hamsters also have eyes that follow this color mixture with attractive brown eyes too.

The coat is a combination of a gray undercoat with orange highlights peppered throughout. They have red eyes that will start to darken with age as a result. The tip of their ears is typically light-colored because of their recessive gene.

With the combination of two different types of Syrian genes, the result is a cream color. Normally, the dominant color is black but is overridden by the cream color that grows in. The fur is not short hair but rather longer fluffy tufts of fur instead.

This is a very unique marking and color combination that has identifying markers. The body is more or less dark gray with a white underside belly. The cheeks have black splashes on them and are mottled with dark gray over their back and legs.

To create this color you need parents that are both black and cinnamon. This is often from a black parent with red eyes who becomes lighter by a cinnamon-colored mate through breeding. The offspring will have eyes that become darker as they age.

This is the celebrated standard coloration of a classic Syrian hamster. They feature golden brown fur with a light-colored stomach and gray-tipped ears. There will also be black markings on their cheeks that can be simple slashes or wide spots.

This coloration is a beautiful gray color with black splashes on the cheeks. However, this version is one that is problematic due to the genes involved, so 25% of the unborn pups often end up dying inside the mother before they are born.

This is an offshoot of the Sable-colored hamster breed that has red eyes. As young pups, they begin with grayish fur that steadily gets darker. The fur turns into a shade of brown that is wispy and has medium-length golden brown fur.

The Syrian breed is also called the Silver Blonde because of its unique color which is light and fluffy. They have red eyes and feature cream-gray fur that includes wispy tufts of near-white fur. Because their fur is going to be extra fluffy, they will need grooming more often.

At first, you might think you are looking at a Golden Syrian but their markings are very different. The back is a golden brown with a white underbelly. The key difference is they have brown cheek markings and light-colored ears.

Sable has a characteristic marking with a combination of cream and umbrous fur coat. The stomach is powder white and can mottle its way up along the sides. The defining feature is dark eyes with light fur rings around them that make their eyes look piercing.

Most silver-gray hamsters will follow the same kind of marking you find on Golden hamsters. The key difference is the light brown and cream color combination with a white belly. The cheeks have brown markings followed by brown ears.

Also called the Russian winter white hamster, these Russian hammies also change color. They are white for most of the year but change to brown in summer. This is the only hamster that does this due to the Russian climate it adapted to.

You will likely have seen this breed as common as the Golden at pet stores everywhere. It’s a short hair light brown color with cream spots scattered all around. They can also have traditional brown cheek splashes.

This Syrian beauty is gender-linked with parents that are yellow and black. The defining colors begin with yellow fur that is tipped with black. The white color on its belly can creep along the haunches. As they grow older, the black tips tend to get darker in random spots.

Just as it sounds, the overall coloring is a single and solid color. This doesn’t mean the legs can’t be a lighter or darker color. The body is not defined with a white underbelly either but you might see white wisps around the nose and mouth.

It looks like your hamster is wearing a white belt around its waist. Because this is a dominant gene, the ears end up turning spotted. The white band is not totally even and can have waves or zigzags roaming throughout the band.

This is another dominant color that is white with spots all over the fur. Sometimes the spots are covering most of the body. Often what you get are random spotting and ears that grow spotted over time.

This is an appealing color to have since the spots are mottled yellow all over the body. The fur is typically brown but you can see traces of cream within the yellow spots. If a father is yellow and the mother is a tortoiseshell, the babies can become yellow too.

Roan hamsters have a trademark dark-ringed head. Their fur will be white and creamy with a snow-white belly. It’s not suggested to mate a roan with a roan because babies are born with no eyes due to their genes.

This is a strange-looking Syrian color with a frilly white body and cream or brown-colored head. No two dapples will have the same markings, making them easier to identify. Many will have white markings along the top of their heads.

What are the different hamster coat types?

Long-haired hamsters from the Syrian breed have hair that can grow to several inches and will need continual grooming. The males are more likely to have longer hair than females.

This little powder puff has frilly and curly fur all over its body. There are also versions of the Rex that include short and long hair. This is another breed that should avoid pairing the same breed with another because of excessive fur problems.

The smooth and shiny fur from satin is always a welcome sight. The fur tends to be somewhat wispy and reminiscent of bedhead hair but is very soft. This breed should not be paired with another satin as it produces babies with thin and matted-looking fur.

This is the standard style of fur that most people associate with hamsters. The fur is short and flat against the body, making them look rat-like without a long tail. This breed is also called the teddy bear hamster since the fur is so well-cropped all over.

This hamster has a base color that is tipped with gray hairs all over the body. This gives a darker appearance to your hamster without losing the original under-color coat. Umbrous hamsters have darker swipes of black on their cheeks, dark eyes, and a light-colored snout.

Do baby hamsters keep their colors when they grow up?

Syrians can start out with light colors but as they age they will darken over time. This is the only breed that does this throughout the year or as they shed their fur. The Russian winter white dwarf will turn brown in the summertime but turn back in the fall.

What is the rarest hamster breed?

Most people may argue that the Chinese hamster is the rarest of breeds but that isn’t always so. There are the Imperial winter whites and Pearl-bellied hammies that make this list too. If you haven’t heard of these before, it’s because they are quite rare to find.

The common hamster is critically endangered in Europe and almost impossible to find in nature.

What are the friendliest hamster breeds?

Without a doubt, Syrian hamsters are known for their friendly temperament and easy-going nature. They can be trained at an early age, they are easy to care for and they make good solitary pets. Once you’ve bonded with them, they can be handled without the danger of being bitten.

For this reason, Syrian hamsters comes recommended for young kids. This is because they are large enough to be handled without injuring them so easily.

Are some hamsters more hypoallergenic than others?

The problem with hamsters is that whether their fur is long or short isn’t going to make a difference for those who have allergies. However, because they live in a cage where these issues are contained so there is less fur that gets around. Only when you handle them can their fur or dander cause allergy symptoms to appear.