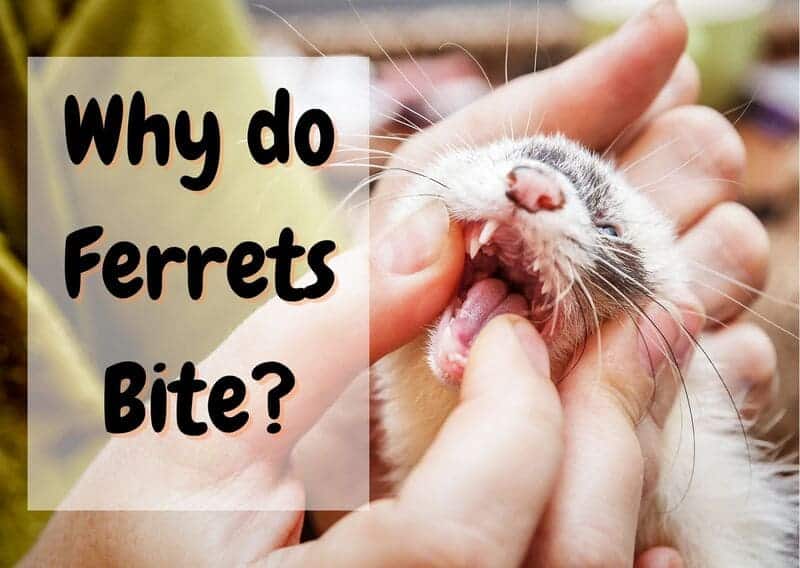 Ferrets are lovely critters, and although they are docile in nature, a potential owner may wonder: do ferrets bite? Will my child be safe around him?

Ferrets do have a tendency to bite when they are excited like during playtime, or when they feel threatened, but it’s not intending to harm humans. They can be easily domesticated with gentleness and care.

In this article, we will see how to avoid ferret bites in young and adult ferrets, and we will discuss whether it is safe to leave children with ferrets or not.

5 Possible Reasons Why an Adult Ferret is a Biter

If your ferret starts to bite, a check-up is needed first. The cause of such behavior is sometimes a health problem. In a specific position, the animal experiences more irritable discomfort and most likely responds by attacking someone who tries to hold it.

Medical reasons to the side, it’s more difficult trying to figure out what would cause the ferret to attack. For example, by bathing them too often, ferrets develop severe dermatitis. This is a common mistake made by most ferret owners, resulting in a defensive bite when touched.

Sometimes a bite is the only way to communicate that he doesn’t want to stay in your arms. This isn’t going to be an aggressive attack, but it’s enough for you to understand that he is just not in the mood.

Some ferrets bite when they get carried away by the excitement of play, not realizing that they exceed the boundaries set by their owner.

Fear is also a reason for frequent biting. If something unexpectedly frightens the ferret, it will respond defensively. This happens either in a new environment or in the company of strange faces or other species. The issue is then resolved by allowing the ferret to slowly adapt to situations that may be a source of anxiety.

If a ferret was discarded by the previous owner it could be because it has a terrible habit of biting. If this action is the result of abuse or negligence, it is necessary to rehabilitate the “difficult” pet with compassion and gentleness.

You must make it clear to him that not all human beings are bad. But it’s a job that takes a considerable amount of time, and it also carries the risk of getting bitten.

It’s in a ferret’s nature to bite things, this practice is considered hereditary. But if ferrets are too defensive, they should not be used to breed because their offspring are likely to have the same problems.

5 Things You Can Do to Avoid Ferret Bites

These popular companion animals require smart and responsible pet ownership. The 6 tips below will help you protect yourself from the bites of these tiny creatures as you train them to be loving pets.

Ferrets are mild and friendly animals: they rarely bite and are rarely aggressive. Despite ongoing propaganda, dogs are more likely to injure people than ferrets.

Are Children Safe With Ferrets?

The disturbing stories you hear about ferrets with children are due to one thing: bad training.

What I have found is that trained ferrets are very family-friendly and pet-friendly. They can form a genuine bond with children over 7 years of age. The ferret is not recommended for younger children as both young children and ferrets have different temperaments and personalities.

Play biting is a common behavior for young ferrets. Of course, they are going to try this kind of rough play with kids. They do not understand how sharp their teeth are which is difficult since biting is how ferrets ask for attention when they want something.

Children younger than five years of age should only handle a ferret under the close supervision of an adult. A child who plays excessively rough can cause young ferrets to scratch and bite in defense.

Children of age must learn not to shout at their pets. Yanking too hard could injure the spines of young ferrets, so children must be taught to gently hold ferrets close, so they feel safe and secure.

How to train your ferret not to bite

First, signal to the ferret that you don’t like his communication methods. In this technique, you must convince your pet that you are discomforted and that you do not approve of his game tactics. You will shout “no” and clap your hands together.

If these tactics don’t succeed, you’re going to have to get up and show him you won’t keep playing as long as it doesn’t stop biting. Put your ferret in his cage and leave him alone as long as the overexcitement continues. Ending the game — this is the most effective discipline for a ferret.

What should you do after being bitten by a ferret?

link to 45 Animals That Start With The Letter J

What animals start with the letter J? We are listing them here for you, from the speedy Jack Rabbit to the clever Jackal, right through to the Jellyfish and the Jay. Without further ado, let's...

Do you know what animals start with the letter I? We've gathered them all in this post so that you can have them all on one page - from the colorful iguana to the docile Indian elephant, right...