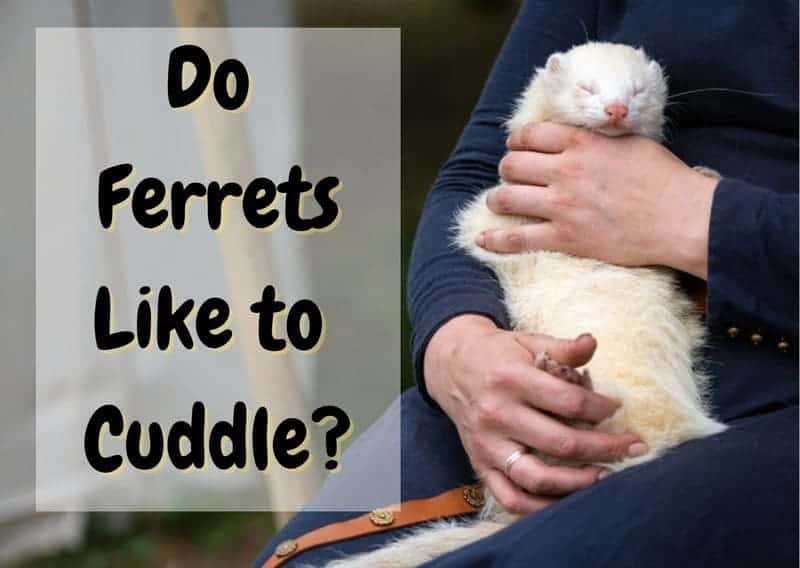 Many people end up bringing home pet ferrets for their energetic and playful tendencies, but you might be wondering if your ferret will ever settle down long enough to cuddle with you too, or if it is all play from now until the end of your ferret’s life.

The truth is, ferrets actually do like to cuddle with humans (and other ferrets) as long as they are given time to adjust to the new situation and to you.

Do Ferrets Cuddle With Humans?

While ferrets are most well known for all of their energy and trouble-making tendencies, they are actually very cuddly creatures whenever they fall asleep, which is a larger portion of the day than you think.

Many ferrets will end up sleeping for as many as 18 hours every single day. During all of that downtime, your ferret will likely love to curl up beside you on the sofa or in your lap as you get some work done.

However, you will need to give your ferret time to adjust to you and your home before he starts cuddling with you. Your ferret will need to start to form a bond and build up some trust before snoozing away in your lap. Try playing with your ferret before trying to cuddle with him, so he can get to know you.

What Are The Benefits of Cuddling For Ferrets?

The most obvious benefit to spending time cuddling with your ferret is creating a deeper bond between you and your pet. The more quality time you spend with your ferret, whether that be playing with him or lounging around together on the couch, the closer you and your beloved ferret will become. Just make sure you do not force your ferret to cuddle, or else it might have the opposite effect.

Other benefits include strengthening your ferret’s immune system and helping both you and your ferret sleep better. It also can help aid in blood flow. As you can see, there are a lot of benefits to spending time cuddling with your ferret.

How To Get a Ferret to Cuddle With You

It is going to take some time and patience to get your relationship with your ferret strong enough and to build up enough trust to get your ferret to relax and cuddle with you. When you first bring your ferret home, give him time to explore his new environment and get used to you.

When he starts to become more interested in walking up to you, try petting your ferret gently on the top of his head. However, you do not want to stroke your ferret’s face. He has very thick whiskers, and moving or stroking them at all can irritate your ferret and make him not want to come near you.

You also want to avoid disciplining your ferret with physical touch. You especially want to avoid flicking him on the nose because ferrets have extremely sensitive noses. Any kind of physical discipline will cause your ferret to form negative associations with touching you, so instead, stick to more gentle methods like a time-out.

Other than that, you want to be patient with your ferret, so make sure he has lots of exercise time to get all of his energy out and consider enticing him into your lap with a yummy treat. Before long, your ferret will love to cuddle with you.

For the most part, ferrets are known for being playful and mischievous little creatures, which could lead you to believe that they are not the most affectionate creatures on the planet. But despite the fact that ferrets are energetic little troublemakers, they are actually quite affectionate when they slow down enough after a long day playing and running around. Many ferrets absolutely love to curl up in their owner’s hoodie or cuddle with someone on the couch in a blanket.

Ferrets are very social creatures. They love to hang out with other ferrets and their people. During the day, this often looks like your ferret wanting to play with you, but in the evening, this starts to look a lot more like cuddling and affection. The combination of their equally playful and affectionate personalities is what makes them such great pets.

Why Won’t My Ferret Cuddle With Me?

There are a couple of reasons why your ferret might not want to cuddle. If you have recently brought your ferret home, it is likely that your ferret simply is not used to you yet. You would likely be overwhelmed if you were suddenly brought into a new environment, surrounded by new people, and your ferret likely is feeling exactly that. Just have some patience and allow him to get used to the space and to you on his own time. As that bond forms through exploration, play, and time, he will likely become cuddly and affectionate all on his own.

On the other hand, if it is only at a certain time of day that your ferret does not want to be held or cuddled, it is likely just because he is not tired then. Ferrets have a lot of energy, so when they have just woken up or have not had enough playtime, they are not going to want to sit still very long. Try playing some games with your ferret before trying to cuddle again.

How Do Ferrets Show Affection?

There are lots of different ways that your ferret might go about trying to show you affection. Of course, they may try to cuddle with you or want to be held, but while those may be the behaviors you most recognize as affection, they are not the only way your ferret will go about showing you just how much he likes you.

Ferrets also show affection through play. If your ferret is always trying to get you to play a game with him or constantly bringing you his favorite toys, he is trying to show you how much he cares about you (in addition to trying to have some fun).

Another way that ferrets show affection is through a little ferret dance. When ferrets get excited to see someone or be around someone, they will often start dancing by hopping and twisting all around in a very cute and energetic display of affection.

This depends on your individual ferret and the time of day. Some ferrets love nothing more than being held and carried around as you go through all of your different day-to-day tasks. On the other hand, some ferrets prefer to keep their paws on the ground and would just feel stressed out if you force them to remain in your arms while you work or walk around your house.

However, no matter how much your ferret likes to cuddle or be held, he is not going to want to sit still whenever he has just woken up or if he has a ton of energy. If, when you pick up your ferret, he is super wiggly or keeps trying to jump down, do not force him to stay because that could prevent him from wanting to be held even when he does start to tucker out.

Do Ferrets Get Attached To Their Owner?

While you likely formed a bond with your ferret very quickly, you might be wondering if your ferret feels the same attachment to you. You will be happy to find out that, yes, ferrets do form attachments to their owners.

Ferrets are extremely social creatures that tend to form very close bonds with all of their family members, including humans, other ferrets, and sometimes even other pets like a family dog or cat. While your ferret will likely form some sort of bond with every person that is around him on a regular basis, a lot of ferrets do end up having one person that they are especially fond of. This is usually whichever person plays with them the most, is around the most, and provides the food.