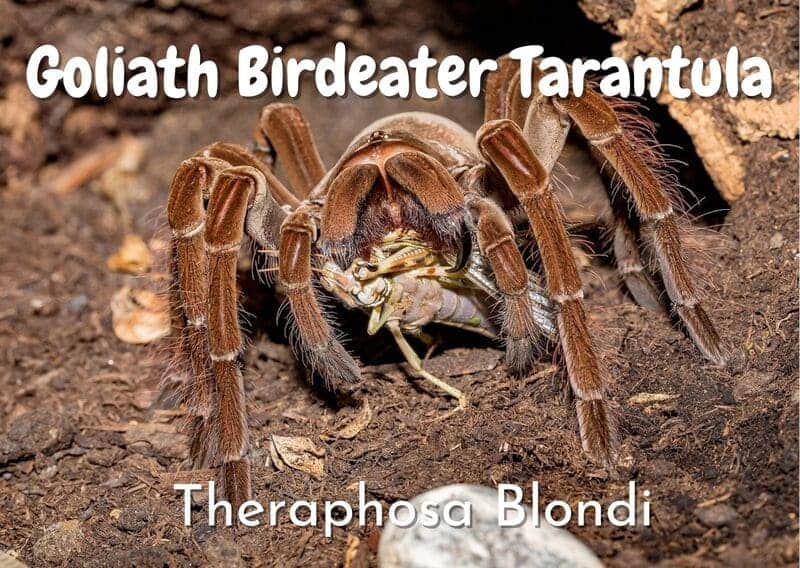 The famous Goliath Bird Eater spider is impressive in size, even as slings. They make great tank crawlers and put on a show when food is served. They aren’t so webby like other tarantulas but need an experienced spider owner who knows they can be sassy.

These South American forest dwellers might be more than a handful. Learn what makes them so special from others.

The Goliath Birdeater is very stalky looking with a brownish-coffee coloration over much of its body. The upper legs often have the trademark twin vertical white stripe along the second segment. Nearby the spinnerets the abdomen is a lighter cream color. The cephalothorax will have star-like cross-hatches along the top carapace.

Not technically the largest of spiders the Goliath Bird Eater tarantula is still impressive in size. An adult female can measure 10-11 inches in length. Males are smaller and can reach 9 inches in leg span length. Slings are an impressive half-dollar coin-sized fuzz-ball.

T.blondi sounds nice and cuddly but this big brute is not for everyone. Even experienced enthusiasts will tell you they need to be raised as slings. They aren’t very concerned with your presence but will become agitated if you make sudden moves. The Bird Eater tarantula tends to pub off their urticating hairs as their main defense. They also use specialized hairs on their pedipalps that make a hissing-like sound, telling you to not bother them.

Due to their massive size, they might try to bolt if handled, and this can prove to be fatal for them if they fall. These grumpy spiders are more suited for those with much more handling experience than others.

There is some debate as to how long the female Goliath Bird Eaters will live. Some experts believe that 20 years is an average, however, some females can live up to 25 years. The history of private keepers does indicate that a healthy life followed by climate requirements can allow for a longer life span. The males will usually last 4-6 years.

This is an aggressive species that should not be held in your hand for several reasons. The urticating hairs are very irritating and can be painful if they get in your eyes or mouth. Since this is their main defense strategy, dropping them from having hairs flicked on you can kill them.

Their bite is not lethal but their fangs are absurdly large and being bitten will require serious medical attention. Due to their sheer size, a fall from half a meter can rupture their abdomen. This alone is yet another reason to not handle them by hand.

Unless you’re an advanced keeper, don’t bother getting a Goliath bird eater. The very nature of this spider is temperamental and aggressive even when they seem calm and lazy. They are more prone to getting nervous and will let you know with hissing rattle-like sounds.

While we’re sure you can’t bring half the forest indoors with you, this spider needs plenty of space. A full-grown female will need an enclosure that is at least a 20-gallon tank. If they sense they have room to stretch their legs, they will roam more often. You will need a glass enclosure since plastic tanks just don’t work well for this.

The more horizontal the enclosure is, the better; since they will stroll along the entire length of their enclosure. This has also proved to be healthier for their species too, increasing a life span in the process.

The top lid should be very secure since they can try to escape if given the chance. This goes to be true for any kind of front access panel also. Make sure they are strong enough to house this mighty beast.

As this species is native to Northern South America, their climate is closer to jungle environments than anything else. You can include artificial logs and various themed hides. Real wood and bark need to be treated before it goes into any habitat with sterilization. It may house insects and other undesired pests that are not good for the Goliath birdeater.

The Bird Eater Tarantula likes 80-90% humidity throughout the year. In winter months it can go as low as 80% but no further than that. Daily spraying of the substrate will maintain the levels that are needed. Of course, you need to have a hygrometer to monitor the humidity level. Choose a meter that can be read on the tank window for an instant update.

With larger tank sizes used you need at least 2 heat pads to cover the entire length of their habitat. These will need to be placed under the bottom of the tank. Never directly put a heating pad into the tank. It will allow gradual heat to radiate through the substrate. This will also allow the humidity to mix with the temperature level for a more rainforest-like climate.

An ideal temperature can be from 77-85F, with slight variations to simulate seasonal changes. Winter will be cooler in the high 70s, whereas the summer should be no more than the mid-80s. Since this species likes to be outside of their burrow most of the day, this temperature will keep them happy.

With higher temperatures and humidity levels such as they are, you need to be careful to remove left-over prey or insect bolus. These kinds of temperatures will allow bacteria to spread faster and will lead to problems with your spider too.

This is an option that is up to your own needs. A rainforest often has a high canopy that is 80-90% shade most of the day. Make sure that your habitat has shaded spots so your spider can decide where they want to hang out. Use an LED lamp with a mask placed in front of the light. It should simulate tall branches that block out selected spots in your tank. Use a warmer LED spectrum too.

While the substrate does need to have moisture to dig burrows, the mixture needs to be treated beforehand. Materials such as topsoil, moss, and coconut fiber need to be sterilized long before it goes into the tank. This can be done using a large baking tray set in the oven for 1 or more hours at 150F. It will kill bacteria and anything living in that material. After that, it can be ready to add water.

A great recipe for a substrate that simulates the forest floor is easy to make. In equal parts of peat moss and coconut fiber (25%-25%), mix in 25% topsoil and 25% vermiculite. The treated substrate should be made beforehand and can be stored in air-tight plastic 5-gallon drums. That way, the next tank cleaning will be fast and easy. It should be stored when it is dry. In the tank, you should place 4-5 inches all along the base for males. Females need 10-12 inches for them to cocoon their eggs properly.

This species will like to eat rodents, small lizards, and large insects. They are not limited to hunting birds (hence the name), frogs, and also smaller snakes. Larger varieties of grasshoppers and dubia roaches make great snacks in between.

Their diet may be varied but the Goliath birdeater is rarely not hungry. It eats a couple of times a week on crickets and insects, while occasional mice will be good once a month. They need insect food primarily for the molting process that happens each year. This isn’t to say that a T. blondi will not enjoy lizards and small birds from time to time.

If you ever see the Goliath birdeater drinking water, you’ll be lucky. Yet they do need a large water dish that is set into the substrate itself. It needs to be the size of a typical peanut butter lid. Smaller T. blondies can have a jelly jar lid. Be sure to provide fresh water every day.

If you have followed all the information up to this point keeping your spider will be easier to manage. Spiders will get stressed for various reasons, but it all comes down to the enclosure itself. If they are pacing back and forth or being too lazy it can be due to the temperature or humidity. You might have a mite or parasite problem if the substrate is not sterile.

Insects or small animals might have introduced pests if they were not raised in proper conditions too. Perhaps that’s not the problem at all, and could be that they are getting ready to molt. If they stop eating for weeks and seem extra lazy, they are not dying. They need to be skinny enough to slip out of the old exoskeleton that has become too small for them. Let them be and don’t disturb them until they’ve finished molting. After they molt wait a couple of weeks or more before you feed them.

Believe it or not, the male Goliath birdeater does not molt after he reaches his adult size. So you will not know he is ready to reproduce until you see that he has produced his sperm web. They mature in 1.5 years, whereas the females take longer.

This species is known to mate several times a year in the wild. This means that captivity breeding for females can start after two years. When she molts she needs time to harden properly until a male is introduced into her habitat.

Both need to be well fed so the male has better chances of escaping after mating. Breeders often use a cardboard shield that keeps the female from attacking the male.

How many eggs will a female lay?

Sometimes these eggs are not fertilized properly and the female will eat them. Breeding is more often but is not so easy for even professional breeders. Some females will store the sperm web for up to 15 months before they decide to use it. This can double up a batch of eggs from 100-200!

Little spiderlings will start to emerge from the den to begin their first molt. Collect them one at a time and put them into little plastic containers with sealing lids. Poke some holes for air. Feed them little mealworms and small head crickets. You can then decide to keep them or sell them to other collectors. It’s up to you how many to keep or let go when they arrive.

Availability of the Goliath Bird Eater

There is a big market for this spider in the collector community. Don’t be tempted to buy a goliath bird eater if you aren’t experienced enough. These big brutes need more space and a larger diet than others. If you decide to buy one, never buy one that is caught in the wild. It can have natural parasites that will eventually kill it. Instead, find a privately bred sling that can be raised much healthier.