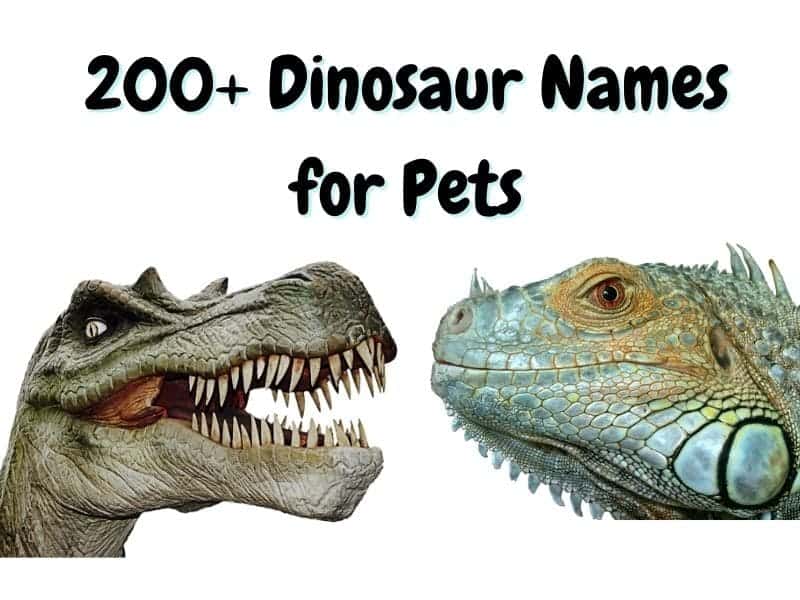 So you just got yourself a new pet and you want to give him or her an original pet name? Or maybe you want to name a very cute dino-shaped teddy you were given as a present? If so, we got your back! Cute dinosaur names are always a great choice since they are unique as well as fascinating.

We’ve been searching the world of dinos to come up with the best and most famous dinosaur names that have been around – from pop culture to literature, animation movies, cartoons, and comics. So whether you got yourself a furry cuddly pet, a reptile, a bird, or a very cute stuffed dino, let’s have a look at what cute, funny, and cool dinosaur names we have in store.

Here are the best dinosaur names with the prehistoric touch you’re after. If you are a manga geek, a video game addict, or a movie fan, you should recognize at least a few. What’s your favorite?

Cool Dinosaur Names For a Pet

Dinos are just so cool – big monsters with even bigger personalities. Probably because, just like mammals, big dinos were possibly warm-blooded, similar to mammals and birds. So they were like cool giants roaming the earth for millions of years! If that’s how you picture dinosaurs, here are some very cool dinosaur names that would fit both a cool pet and an even cooler owner.

Yes, most dinosaurs were actually very cute and inoffensive creatures – many scientists believe that about 2/3 of all dinosaurs were herbivores, meaning that they were peacefully chewing grass and leaves most of the day. So if you are looking for a cute dino name for a cuddly pet or teddy, you can pick one here.

Do you know why dinosaurs can’t go on boats? Because they cause too many Ship Rex!

Now if you’re really into daddy’s jokes… we’ve got some great dinosaur-related puns that would also make great pet names!

How many dinosaurs can you name? We all know the T-Rex from the Jurassic World movies, but you will soon discover that many other dinos will make great pet names for your new friend.

We’ve gathered some of the most famous dinosaurs in the list below – although there are many, many more. But since they are not easy to pronounce… we’ve come up with some “human” names that you could give your pet based on these real dinosaur names.

Famous Dinosaur Names You Can Give Your Pet

If you are after a famous dinosaur name, we’ve got you covered! We’ve listed here many dinosaurs’ names from literature, Disney dino names, dinosaurs names from films and TV shows, as well as famous dino names from comics and animation movies. If you can’t find what you’re looking for… don’t give up – just like the Try-try-try-ceratops!

Choosing a Dinosaur Name For Your Pet

Hopefully, by now you’ve chosen the best dino name for your pet. Did you choose it based on personality, cuteness, or from one of your favorite childhood cartoon characters? Congrats! You now have a dinosaur name for a pet that is absolutely roar-some!

By the way… ever wondered what it would be like to have a REAL dinosaur as a pet for breakfast?

link to Hamster Names: 200+Unique & Cute Names for a Hamster!

When you first bring home a cute and fluffy hamster, the excitement of having your own little friend might overwhelm you. It can be tempting to call it just about anything, but if you want to get...