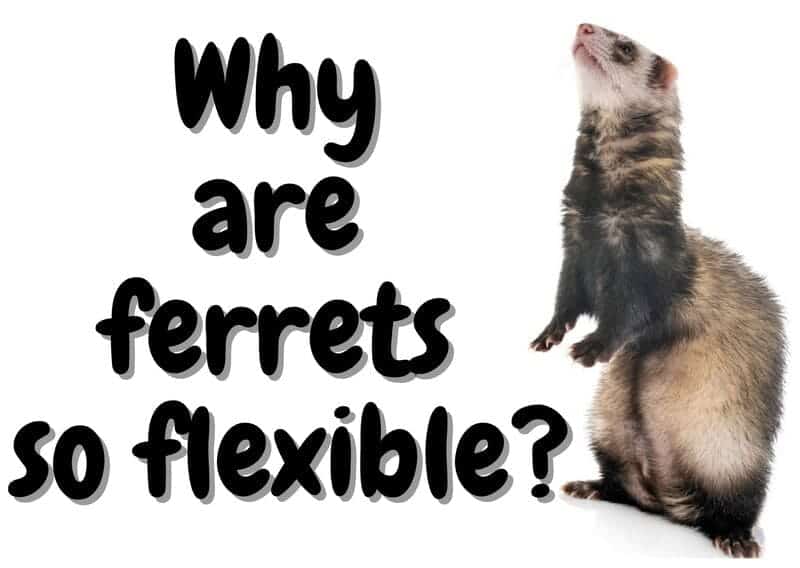 Ferrets are very unique animals for a number of different reasons ranging from their personalities to how you care for them. One of the many reasons that ferrets are unique creatures is the way they move. Ferrets can bend and twist in all sorts of seemingly unnatural ways. In fact, if you have ever held a ferret, you may have felt afraid that you were injuring him because of the way he bent and twisted. But the truth is, ferrets are designed to move like that.

So why are ferrets so flexible? That’s because the ferret’s skeletal system is unlike pretty much any other mammal’s skeletal system. Their spines are made up of a lot of vertebrae that can all move around almost as if they are made out of a flexible material like rubber. This unique system allows them to bend, twist, and squeeze themselves however they want. In the wild, this helps ferret’s survive, but in your home, it just allows them to play, explore, and cause you lots of trouble.

What Makes Ferrets So Flexible?

It does not take you very long to figure out that there is something special about ferrets’ skeletal systems. They can wiggle all around through tunnels and along the floor, they can squeeze through even the tiniest of spaces, and they can twist their body into a full circle. In fact, ferrets are one of the bendiest creatures on the planet, so it makes sense if you are wondering just why ferrets are so flexible.

The main reason the ferrets can bend in all the different ways that they can is that they have very flexible spinal columns. The vertebrae that make up their spine are very movable in contrast to other animals (like humans) that have more solid and immobile vertebrae. Additionally, ferrets have very strong back muscles that allow them to bend and twist their spine in whatever way they need.

It is believed that ferrets adapted to be so flexible because of their food source. In the wild, ferrets are hunters. They spend a lot of their time catching small prey like small rodents and frogs. Often these small animals will try to escape the ferrets by crawling into small tunnels and holes. Ferrets needed a flexible spine in order to go after their prey inside the tunnels and holes.

Finally, your ferret is also able to squeeze through small places due to the uniqueness of his ribcage. Ferrets have collapsible ribs that they can flatten out to squeeze under doors in your house or through tight spaces in the wild.

How Flexible Are Ferrets?

Ferrets also do not have to fear running down these narrow tunnels and holes because they are able to twist their body and do a full U-turn if necessary. In your house, you might see your ferret twist in tight circles and around sharp corners with ease.

Ferrets can bend up to 180 degrees horizontally and 180 degrees vertically. In fact, when you are holding and playing with your ferret, it can move in so many different directions that it can almost appear as if your ferret is unbreakable. However, you should never bend your ferret’s back as it can cause muscle strains, fractures, or dislocation, which can be painful for your ferret and expensive to fix. Some injuries can be so bad that they end up being fatal.

Do Ferrets Have Spines?

When some people see ferrets move almost as if they were made of liquid, they start to wonder whether or not ferrets actually have a spine at all. However, ferrets do have spines, though they are very different from what you might be used to. Their spines, which are almost like rubber, span the entire length of their body and are attached to their ribs.

It is estimated that ferrets have 200 different bones that make up their small bodies. They have 46 vertebrae (in comparison to a human who only has 24 despite being much bigger) and 14 to 15 pairs of ribs in comparison to humans who only have 12. This means that not only do ferrets have spines, but they actually have more bones in their spine when compared to significantly larger mammals.

Whenever you go to pick up a ferret, it is important that you keep their spines in mind. Just because their spines can extend does not mean you should force them to do so. When you hold a ferret, you need to make sure that you support both ends of his body and do not force your ferret to bend or move in a way that he is resistant to.

Can Ferrets Break Their Backs?

As mentioned earlier, just because ferrets are very flexible does not mean they are unbreakable. If they fall or move in the wrong way, ferrets can break their bones just like humans can.

The first reason that a lot of ferrets get hurt is falling. While ferrets love to move, play, and explore whenever they are awake, they are not graceful animals. You may have heard that cats always land on their feet, but this is not the case for ferrets. They also have very poor depth and height perception. In fact, when ferrets are climbing and exploring, they often fall (or even try to jump down) and land in awkward positions that can result in broken bones and back injuries.

It is also possible for your ferret to break other bones, such as a limb, but these injuries are usually a lot less severe. If you think your ferret may have broken another bone, you should immediately take him to the vet to get checked out. As long as he is treated properly and quickly, he should recover just fine.