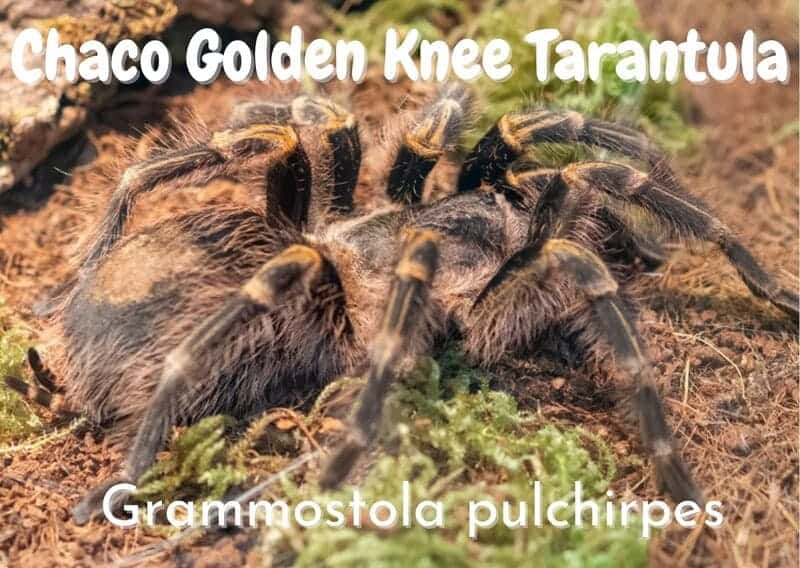 At first glance, this could pass for a Costa Rican Zebra tarantula, yet the Chaco Golden Knee is home to Paraguay and Argentina. Scientifically classified as Grammostola pulchirpes, it’s not too different than its near-identical zebra cousin.

This somewhat timid yet easygoing tarantula is not hard to come by at the local pet store. The Chaco Golden Knee is a great beginner display pet the older it matures as you will soon find out.

Grammostola pulchirpes- Discovered and named by Eugene Louis Simon, (1891). Out of 21 species that have been identified in South America, 2 of these have been Simon’s discovery.

The overall appearance of a Golden Knee is black in appearance with golden yellow tips over much of its legs and abdomen. The carapace is lightly dusted with yellow over black with a very light violet or green iridescent sheen. There is a bright band of yellow above the pedipalps. Females are more vibrant than males and can take years to develop these colors. Slings will appear with light tan with a darker chocolate brown abdomen.

A mature female can reach 7 to 8 inches (17.78cm- 18cm) when their legs are outstretched. If you get them as slings they will measure less than an inch (1.5cm) at the most in length.

This species is an excellent beginner tarantula, best known for being very docile and not confrontational for handling. Being a bit more skittish as young slings, they will be easily trained as they continue to molt. They are very tolerant of their owners and very seldom kick hairs from their abdomen when it comes time to pick them up.

Female Golden Knee tarantulas can live up to 20-25 years or perhaps more in the right conditions. As expected, the males will have a maximum of 4 to 5 years or less if they get eaten after mating. Just watch out if you decide to breed a male and female since this can lead to post-mating attacks on the male.

This species is a hearty eater that likes hunting its prey, making it fascinating to watch. When it comes to handling, this is a perfect first-time spider that is totally indifferent to being picked up. Even when it comes to flicking hairs, it seems to be uninterested in putting up much fight as long as you’re not making sudden moves.

It’s very uncommon that a Chaco Golden Knee will bite its owner. They have very large fangs that can appear menacing at first but are only used for biting their food. If they do bite for any reason they have two types that can happen. One is a dry bite and one is with venom. The venom is not deadly and will result in pain, itchiness, and swelling for a day or so.

This is not a difficult spider to take care of because they tend to be so docile when kept in captivity. As long as you follow a regular check-up of their habitat and clean out leftover insect husks, they are easy to maintain upkeep. Any beginner will be happy to own a Golden Knee for years and watch them grow into a beautiful and friendly spider.

If you start with a sling, you can keep them in a small plastic Tupperware container with some holes pokes in the top for the first few molts. As they grow, your spider can graduate to a 1-gallon tank with a closing top. Later, it’s recommended to provide a 5-10 gallon tank as their final habitat.

Being a terrestrial spider, it will enjoy roaming around. You’ll find that it can climb the glass when it’s younger, so be sure to add enough substrate if they fall.

Avoid putting items against the glass to prevent a growing spider from getting too close to the top of your lid. You will also have better luck by having an access window on the side of the tank so you don’t have to reach through the lid all the time.

The biggest task you will need to follow is cleaning out the empty shell of an insect your spider has drained. They won’t be hard to spot and can be removed using a long pair of tweezers. These empty shells can be problematic if they have any kind of bacteria that could grow.

Aside from that, only buy insects that are raised in pet stores, so they have no parasites that can get into your spider’s substrate. Be sure to check the substrate to make sure it’s moist enough and change it at least every month or so just to be extra cautious.

Chaco Golden Knees will love living in a habitat that they can organize. This species likes to move around the substrate pretty often and will actively make different burrows. Even if you add artificial hidey houses for them, they will be rearranging a new hideout nearly every other day. Just make sure their soil is moist enough so they can make suitable burrows.

The Grammastola pulchirpes likes 55 to 65% humidity all year round. This is good for them and they’ll like an average of 60% for the most part which will come from having semi-moist soil. Give your habitat a good spray in the morning and that’s about all you need to keep the right moisture level where your golden knee is content.

The best temperature is going to be between 68 to 74F degrees all year round, which is pretty mild. If you like this range of temperature, then your spider will be a happy camper too. You don’t need to have anything higher or add any heating unless it gets very cold in the winter where you live.

You won’t be giving a lot of direct light onto your habitat so a good LED light off to the side is fine. It should be a continual spectrum with around 2500-3000K with a dimmer to adjust the level as you like. Golden Knee tarantulas are usually burrowing but will be actively moving substrate around all day.

This species will enjoy at least 6 inches of substrate to make plenty of burrows so buy a habitat that allows for vertical tank height too. You will want to have good chemical and parasite-free compost soil with coconut fiber mixed in.

It needs to be totally sterile so be careful not to put insects from your backyard into the habitat. Always bake your soil and substrate mix in an oven to kill anything at 150F for one hour. Let it cool and put this into your tank.

Always use clean water that can be bottled or tap water that is filtered. It might be more common that your spider will move soil around a lot, so make sure it’s not piling up in the corner where it can reach the top of your enclosure.

How to feed the Chaco Golden Knee

Your spider will enjoy mostly a diet of crickets, roaches, and grasshoppers as they get big enough. Smaller versions will be needed when they’re just slings so little nymphs with the heads removed and small mealworms are safe for slings.

Keep in mind your tarantula’s size as opposed to what food you give them. It should always be one-third of the size of your spider and not any bigger. You should also remove their empty bolus after your spider has finished every meal.

How often do they need feeding?

An adult can be fed once or twice a week if they take the bait, but remove any insect that isn’t being eaten after a day. Slings will feed more often but will stop eating when it’s time for them to molt.

After a year or so, you’ll notice that your adult spider won’t eat for a while so they can get skinny enough to shed their exoskeleton. After they do, wait a couple of days before you feed them so they can be hard enough to take on the challenge.

What you’ll need is a cap of water that is sunken into the substrate. Slings need a shallow cap so they don’t drown, so the top off of a Tylenol bottle is fine. Adults will need a cap that’s about the size of a Snapple or Clamato tomato juice bottle. Always remove any debris if your spider drags substrate into it.

Your typical Chaco Golden Knee tarantula is a very chilled customer for being picked up. It’s a laid-back spider, which makes it perfect for allowing it to move from hand to hand. As usual, you need to be sure that you’re on a soft surface if they happen to fall by accident. For this reason, make sure they can’t fall more than one meter from your arm onto a couch or soft carpet.

In the wild, your spider would be subjected to all sorts of predators, parasites, and environmental issues. In captivity, you won’t expect anything to go wrong unless you aren’t providing your spider with what they need.

Clean and sterile substrate, captivity-bred insects, clean water, temperature and humidity, and a good habitat setup. Follow the type of climate your spider lives in, but this species is so average, you can’t really mess that up unless you’re being cruel.

This could take up to 8 years or more, while the males can take less time to mature at 4 years or so. Males can develop emboli on their pedipalps (their tibial spurs) and start making sperm webs. Females must also be ready to molt. The male will start his drumming to gain the attention of a female which is a sort of enticing song. Afterward, the male must be removed from the habitat immediately.

How many eggs does a female Charco Golden Knee lay?

If the mating was a success, the female will retreat into her burrow and take up to 53 days or more to produce her egg sack. This can become 100-500 eggs within that sack that she protects in her burrow. Once it’s time to remove this sack, you will have to be careful and find the moment when she’s out looking for food.

You need to put the egg sack into a spot that will allow the eggs to remain warm until they start to hatch, after that, watch out for an invasion so an enclosed covering will keep them from all crawling away. They will need food small enough that they can eat it, such as fruit flies.

The slings will grow very fast after they’re hatched. Put them into Chinese take-out Tupperware cases and let exotic pet stores or private buyers know you have Chaco Golden Knee slings for sale.

Availability of the Chaco Golden Knee

Golden Knee Tarantulas are not hard to find and are pretty common. You can check at places such as Petco to see what’s available, but most exotic pet stores will be able to track down a source right away.