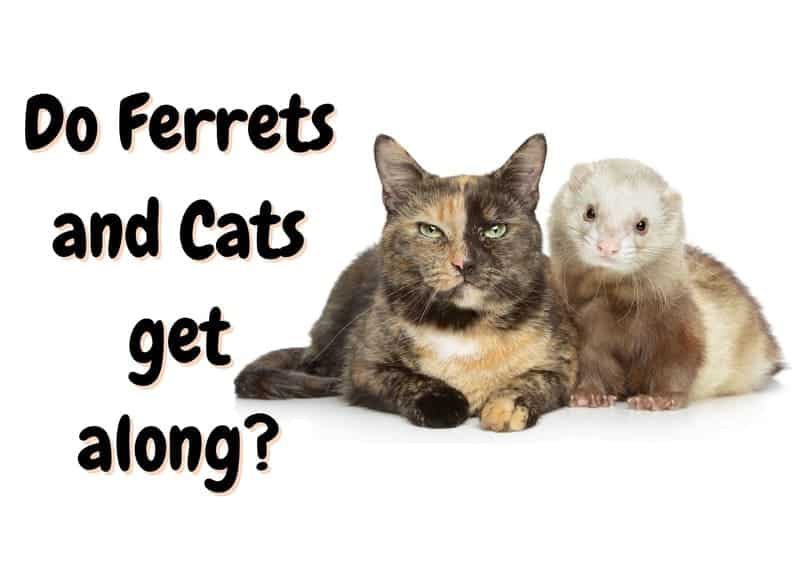 Can cats and ferrets cohabit? That’s a great question to ask if you are thinking of bringing a new exotic friend into your house. In this article, we will see if the two species are a good fit under the same roof or a combination best to avoid.

With a little bit of time and a proper introduction, cats and ferrets generally get along. They can actually be fantastic playmates. However, as their personalities differ quite a bit, make sure you understand when and how to introduce a ferret to your cat.

3 Reasons Why Cats and Ferrets Can Be Great Friends

Cats and ferrets can be great companions. Of course, this depends greatly on the personality of each animal.

The two also share some similarities. Both can be litter box trained, and it is even safe to feed your ferret kitten or some cat food. But before you go running out the door to buy your cat a ferret friend, there are a few things you should consider.

Ferrets are playful and make excellent companions, but they require more work and supervision than other kinds of pets. To have a happy and friendly ferret you should begin handling it constantly from a young age.

Cats are more easygoing and tend to have a much calmer disposition once they reach adulthood, after about 8 months. This can be a problem since ferrets behave like little kittens pretty much their whole life. This might annoy your cat, depending on its personality. Or it can be really fun to watch.

Keep in mind, similar to cats, ferrets are carnivorous creatures. Their natural instinct is to hunt, so any smaller pets you may have can quickly become prey to a mischievous ferret.

Just like cats, your ferret will surprise you with their intelligence. They will learn to recognize their name and you can even teach them tricks. Being intelligent creatures, they can typically entertain themselves while you are away.

If left to their own devices for too long, there is a lot of trouble these little animals can get themselves into. A few hours of supervised play outside of their cage each day should keep even the most active of ferrets in check.

How Can I Introduce My Ferret and Cat?

So you’ve decided that you want to get a ferret or a cat as an addition to the family. The key to introducing your ferret and cat, like with any other pet, is to be patient.

For the first day or two, you should keep your ferret and cat in separate areas. This will establish a living space for your ferret while not adding stress to your cat.

When you are ready to move to the next stage, simply swap the ferret and the cat so they can get to know each other through smell. The first time your pets see each other, the ferret should be safely secured in its cage.

This will allow your two pets to sniff each other while providing a safe distance. Have repeated sessions like this until both animals seem comfortable around each other.

Your ferret will tend to think of the cat and other larger animals as big toys for them to play with. They find immense joy in trying to hitch a ride on the back, or even belly, of a cat, and will instigate playtime by nipping at toes and tails.

You should expect to supervise your pets’ playtime for several months before even considering leaving them alone.

Cats can initially be startled by the quirky antics of ferrets. Make sure your cat isn’t tempted to hunt or lash out at the ferret, and don’t be afraid to revert back to separated visits.

You will find that the more time and care you put into introducing your animals will result in a quicker bond and a stronger friendship between the two.

Even if you do everything right, it is still possible that your ferret and cat won’t get along. When this occurs you can still keep both pets, you will just have to work extra hard to make sure both are kept safe and happy.

Defining different living areas for the two will be essential, especially if one has shown signs of repeated aggression toward the other. Minimize the contact they have with one another.

4. Give Them More Time to Adjust

After several weeks you can try to introduce them again as it is possible they have grown more used to living under the same roof.

Don’t stress out about it though, there are plenty of households where two pets of varying species don’t get along. As long as they are both happy you are doing something right.

When Not to Introduce a Ferret to a Cat

Before we go over how to introduce a ferret and a cat, let’s quickly talk about when it may not be the best idea to introduce them to each other.

Ferrets and cats are both carnivorous creatures, with prey drives that may kick in when presented with an intruder. For this reason, it is not advised to introduce a ferret to a kitten, or a cat to a kit, since the adult animal can very quickly harm the youngster.

Even if they are just trying to play, an adult animal can cause serious harm to the baby if you are not constantly supervising them.

If you have a cat or ferret that has a more aggressive, snappy, or possessive personality, they may be better off as only pets.

As fun as it is to get a new family member, you have to honor your commitment to the one who is already living in your home. The key to a successful introduction is knowing when your current pet is or isn’t ready to add a new member to the family.

Do Ferrets and Other Animals Get Along?

The topic of ferrets and dogs is not as cut and dry. You really must consider the temperament of your dog when deciding how it would do with a ferret. Breeds like terriers have a high prey drive and will be likely to chase ferrets, and large dogs may accidentally hurt them during play.

To have the best success keep the dog’s food away from the ferret, and following the principles previously discussed, do not allow dogs and ferrets to play freely together without supervision.

Ferrets and Rodents, Birds, and Lizards

Due to their carnivorous nature, it is not recommended to allow ferrets to interact with small pets like rodents, birds, and lizards. While they may not mean to hurt smaller animals, quick movements can activate a ferret’s prey instinct.

These fierce little hunters can cause a lot of damage to an unsuspecting animal, so for the sake of both parties, keep these ones separated.